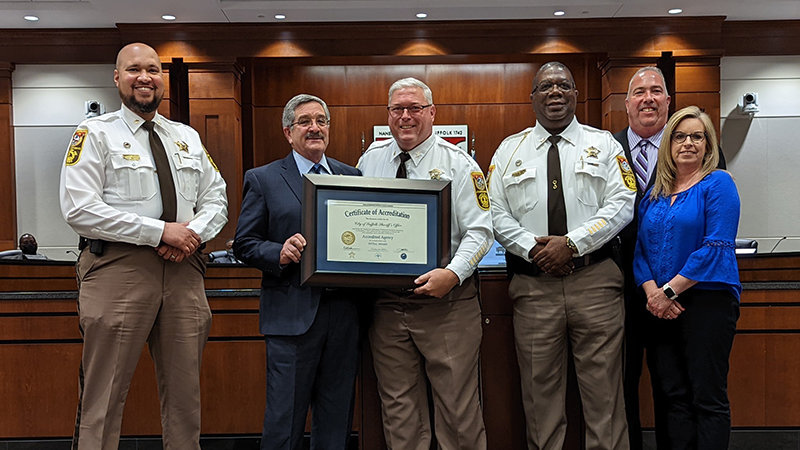 Suffolk Sheriff E.C. Harris had never spoken before City Council, but his first time came as he received the certificate signifying that his office has been fully accredited.

The Sheriff’s Office had its initial assessment for accreditation in September and went before the commission Dec. 9.

With close to 400 law enforcement agencies in Virginia, just 102 have received accreditation, Clingenpeel said, and the Suffolk Sheriff’s Office received high marks, meeting all 191 of the necessary standards in administration, operations, personnel and training.

It meant everything from uniforms, to the evidence room, how it does business and its policies and procedures, and Clingenpeel’s staff went on ride-alongs with deputies, observing them in their daily duties and also spoke to residents.

“What the program found is that it was an exceptional law enforcement agency here in the commonwealth,” Clingenpeel said. “And when I say exceptional, there were zero returns on their accreditation programs. Zero returns. That’s almost unheard of. And this community should be very proud, and I know Sheriff Harris must be very proud of his office for what they have done.”

Among the items that stood out to Clingenpeel from the program report is the pride in which Deputy Morgan Olson does his job.

“What they said about Deputy Olson says he has pride in his sheriff’s office and also has pride in his community,” Clingenpeel said. “He boasted tremendously about the community that he worked in and the people that lived and worked here, and how proud he was to serve this community.”

The assessors also noted how prepared the Sheriff’s Office was while expounding on its level of commitment.
“There was a high level of integrity and professionalism,” Clingenpeel said.

Harris, in accepting the certificate of accreditation, said everyone in the office bought into an accreditation process that began in 2017, but it was made easier because he said his deputies and staff are dedicated to serving the community.

Mayor Mike Duman praised the work of the Sheriff’s Office in being accredited for the first time.

Harris credited Duman, Vice Mayor Leroy Bennett and the other council members past and present with helping the Sheriff’s Office, providing it with resources to allow it to get its message across to the community.