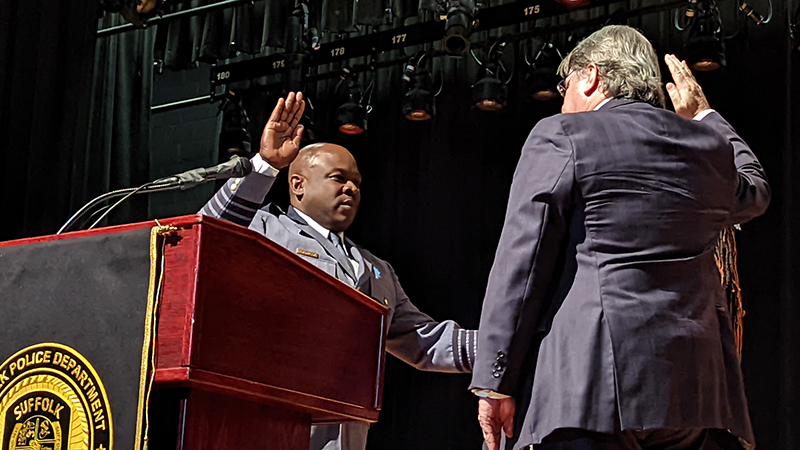 “There may be a time, there’s going to come a time, when I’ll be pushing to the point of discomfort to make this department better. I’ll be asking some tough questions to ensure that we make our cases stronger. I’ll be pressing for better options to make our operations safe. I will even most likely say some things that will just get on your nerves, but that’s not today. Today ma’am, today sir, we celebrate. Today ma’am, today sir, we dance. Today, we take the opportunity to think about the fact that we’re here in this moment at this time, to be a change that nobody can say didn’t happen.”

Before he got started, Chandler, who is also a site pastor at Zion Community Church’s downtown Hampton location, thanked God for allowing him “another opportunity to serve in this capacity.”

He thanked his late mother, Thomasine T. Chandler, represented in a front-row seat with a bouquet of roses next to his father, Alfred S. Chandler Sr., whom he referred to as “my rock, my hero.” He also honored other members of his family, including his four children, Elliot, Earon, Eric and Alisa, and his wife, Tisa — “my girl, my ride or die, my A1 Day 1,” someone who has always been there for him.

“When we met, I was just a young patrol officer,” Chandler said, “but in the infamous words of rapper Drake, ‘We started from the bottom, now the whole team here,” lyrics from his song, “Started from the Bottom.”

Chandler offered thanks to City Manager Al Moor “for trusting me with the safety of our city.” He also thanked members of City Council —- most of whom, including Mayor Mike Duman, Vice Mayor Leroy Bennett, Lue Ward, Donald Goldberg, LeOtis Williams and Shelley Butler-Barlow, were in attendance —- for their continued support of the police department.

He also thanked the community at large for its support and guidance, and thanked his department’s employees for their friendship and support, “over not only the past 22 months, but the past 23 years.” He also acknowledged the death of Sgt. Joe Rivera, who died May 31.

“Some run, some quit, some hide, but the fact that each of you here in the Suffolk Police Department are still here, that illustrates the level of commitment that should be truly appreciated and celebrated.”

Before wrapping up, Chandler brought up Harris, George and Bondo, and noted they all had one person in common, retired field training officer William “Wild Bill” Franklin, someone he wanted to thank for the great work he did for the department.

Chandler, as he says often, said that he loves his job and what he does, in the good times, and some tough ones, also. He said if he could talk to his young self when he was growing up in Portsmouth, where he loved to ride bicycles and cheer on the Dallas Cowboys, that he’d say, “if you work hard, good things will happen,” and that “if you keep pushing and learning and growing, there’s nothing that can stop you, because what God has for you is for you.”

“Being a chief of police is too large a job for anyone to successfully do alone,” Chandler said. “And I thank each of you for being there for me, and I will continue to be there for you as well.