20/20 vision on Bowers Hill interchange: A mixing bowl 20 years in the making, work to take another 20 years to complete 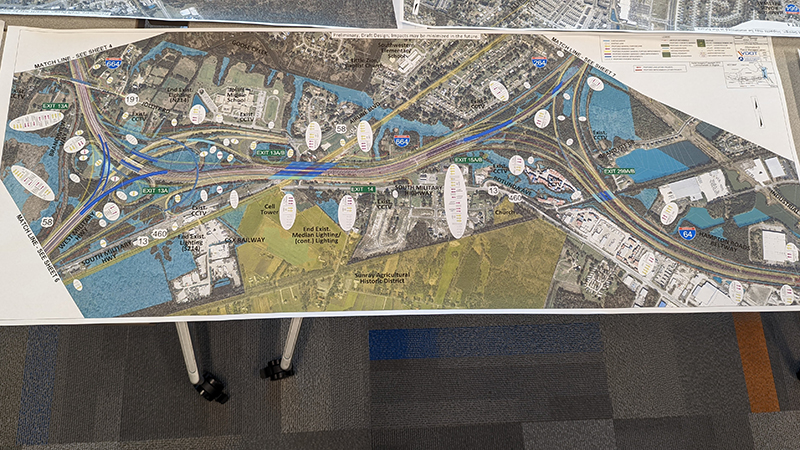 The project to improve the maze of roads that converge at Bowers Hill has already been 20 years in the making, and the mixing bowl, or mixing bowl junior, as officials have described the project, is still about 20 years from fruition.

Transportation officials originally gave the mixing bowl designation to a confluence of roads around the area of Springfield, in northern Virginia, where a different set of highways and roads converge.

That took three different, albeit large interstates —- 95, 395 and 495 — along with Route 644, to make improvements over eight years and seven phases, at the time making it one of the largest highway construction projects in the U.S. Originally budgeted at $241 million in 1994, it cost $676 million to complete from 1999 through 2007, and has 50 ramps and bridges and is 24 lanes at its widest point.

The changes coming to Bowers Hill aren’t quite as dramatic, but nevertheless significant to what officials hope will improve traffic flow in an area where Interstates 64, 264 and 664, as well as U.S. Routes 13, 58 and 460 and Jolliff Road, converge as upward of 150,000 vehicles move through daily.

“This essentially is our mixing bowl,” said Public Works Director Robert Lewis at a public meeting Wednesday. “There’s not a more complex set of roads anywhere in Hampton Roads than right here.”

VDOT began the environmental review process for the Bowers Hill interchange in coordination with the Federal Highway Administration in 2018. After the environmental assessment came out, the Hampton Roads Transportation Planning Organization, after consulting with region, state and federal agencies, expanded the study area in 2020 to include an area of I-664 from Bowers Hill to the College Drive interchange. Other interchanges along I-664 to College Drive are included in the study.

Looking at all the lines, arrows, colors, landmarks and other features of the proposed project on the maps created by VDOT’s Brian Peeler, a mixing bowl might indeed be an apt description of Bowers Hill and the interchange work to come.

“A lot of what we’re dealing with right now we’ve been studying this for 20, 30 years to get where some of the projects are going now,” Lewis said.

VDOT has recommended an additional lane and a part-time driveable shoulder lane in each direction be added onto I-664 from Bowers Hill to College Drive in an effort to reduce congestion, increase travel reliability in the area and provide additional travel choices. The project has been targeted for funding as a regional priority project in the Hampton Roads region’s 2045 long-range transportation plan.

“The preferred alternative meets our purpose and need for the study, said Andrew Pike, VDOT project manager for the Bowers Hill interchange study.

It would mean the need for 21 potential residential acquisitions and the project would impact about 60 acres of property, which does not include the total acreage of property VDOT would need to acquire for the project. It would also impact about 103 acres of wetlands and 11,356 linear feet of streams. VDOT officials said late last year that the project would align with the Hampton Roads express lane network under construction as part of the I-64 Southside/High Rise Bridge project.

VDOT had also considered adding one or two general-purpose lanes in each direction, adding one or two managed lanes, collector-distributor lanes — extra lanes between the main interstate lanes and the frontage roads. Officials said that would have improved the interchanges but not the entire corridor. It had also considered improving transit service, park-and-ride facilities and extending acceleration and deceleration lanes.

About 70,000 vehicles — 93% of them four-wheel vehicles and another 4% tractor-trailers — drive I-664 in each direction through the Bowers Hill area daily, according to 2020 VDOT traffic engineering estimates, and about 46,000 vehicles move each way every day on I-264 in the area.

Comments on the interchange study will be taken through May 7. VDOT plans to review the public comments and finalize the study documentation. The Commonwealth Transportation Board will then have to sign off on its preferred alternative before the highway administration publishes the draft environmental impact statement, which the public can expect to review late this summer. The highway administration then expects to issue a final environmental impact statement and a record of decision for the project next year.

VDOT in 2019 estimated the project to cost at least $450 million. But with a mixing bowl of issues still on the table for the interchange, and more than 20 years from being resolved, the cost is expected to rise. In the timeframe from start to finish, the northern Virginia mixing bowl costs tripled.