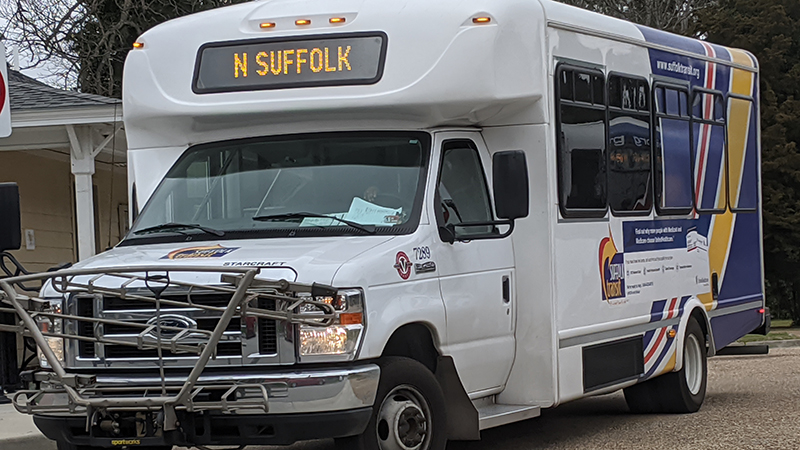 Suffolk Transit is looking to gauge interest in extending service to Sundays and has initiated a rider survey to evaluate route changes put into place last fall and determine how satisfied people are with the city’s bus service. File photo

Suffolk Transit has initiated a rider survey to evaluate recent route changes and determine how satisfied people are with the city’s bus service.

It also will look to identify any changes and gauge interest in extending service to Sundays.

Citing rapid growth in residents, along with increased commercial and industrial businesses, the city said it is looking to continue ramping up its transportation infrastructure.

Annual ridership has quadrupled in the last 10 years from 24,662 passengers accessing 10 bus stops to 108,658 passengers and 180 bus stops. Suffolk Transit has gone from two routes with a bus fleet of four to six bus routes using nine buses. Paratransit service is also available to pick up and drop off people within three-quarters of a mile of any bus route.

“Our challenge has been to develop a service that accommodates and keeps pace with a rapidly developing city,” said Suffolk Transit Manager Maria Ptakowski in a statement. “Our most recent round of improvements came into effect in September when we introduced three larger buses to our fleet and made fundamental changes to our routes. We redesigned the routes switching from a circular to a bi-directional system.

“A bi-directional route system moves people from point A to point B quicker and increases bus frequency at any given bus stop along that route. This system would better serve the passengers and reassure businesses looking for a reliable workforce.”

She said the circular system served the city well for a number of years, making good use of what she said were the city’s limited resources. But, she said, “we want to move away from that model and give passengers an on-time service that they can count on. Future improvements will come into effect incrementally, but as we evolve, we want to increase regional connectivity with transport hubs in neighboring cities. We want to be part of workforce development across city boundaries and we want to reduce the gaps in coverage for people who really need service.”

The route adjustments at that time included a bi-directional service on the Green Route to create new direct connections to popular connections. It operates between King’s Fork High School, the Downtown Transfer Station and the Saratoga neighborhood south of West Washington Street.

The Red Route is also a bi-directional service through the downtown area, extending it to the Pruden Center, which had been part of the Green Route. Suffolk Transit made the Yellow Route more direct to connect the CenterPoint Industrial Park area, the Food Lion on Holland Road and the Downtown Transfer Station, and it added an extra hour to the Pink Route and also made it bi-directional. The Pink Route operates on Nansemond Parkway, Progress Road and Wilroy Road.

The city notes that $1.5 million is invested in Suffolk Transit yearly, and there is an additional $2 million proposed for fiscal year 2025 to build the operations facility.

“We have come a long way in a short time,” Ptakowski said. “We still have many challenges to face but we will keep listening to passengers, business leaders and other stakeholders as their input will help shape the future of Suffolk Transit.”

The rider survey, available at https://www.surveymonkey.com/r/KQN7PVT, will conclude on May 28. Paper copies will be available on the buses, at Suffolk Public Libraries, City Hall and Social Services.  For more information, contact Ptakowski at 757-514-7641 or mptakowski@suffolkva.us.