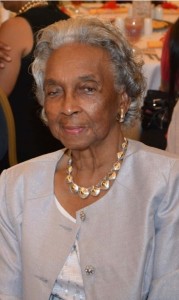 Elizabeth M. Bernard peacefully departed this world with members of her family by her side on May 1, 2022, at Heritage Hall in Leesburg.

Elizabeth was born to the late John and Martha MaGee in Suffolk, on July 9, 1925. Even though she moved to Harlem, N.Y. at the age of 2, she spent her summers in Suffolk, with family members. It was during one of those summers that she met her soulmate, Malcolm Boone Bernard. They were married on July 18, 1941, and remained married for over 46 years until his death in 1988. Elizabeth and Malcolm were the proud parents of three sons: Malcolm Jr., John, and Cecil Vann.

Until her family relocated her to Northern Virginia in October 2021, Elizabeth was an active member of First Baptist Church of Mahan Street for more than 75 years. She was known for helping others and always doing it with a smile and a kind word.

Lizzie, as she was affectionally called by many of her friends, had a long career at Universal Insurance Company. Prior to working at Universal, she served as the first African American crossing guard in Suffolk. She retired from Universal Insurance with over 35 years of service. Elizabeth enjoyed spending time with her family, particularly her grandchildren and great-grands. She had several hobbies, including shopping, sewing, dancing and playing cards. Everyone in Suffolk knew her as the queen of the “early bird shopping,” she never missed a sale. Everyone knew she really loved to dance and was always moving to the beat. She was an excellent seamstress. She also loved to travel. She and Malcolm were avid travelers. Before his death, they often traveled with their sons along with their wives.

Elizabeth was preceded in death by her husband, Malcolm Sr.; two of her sons, Malcolm Jr. and John and a daughter-in-law, Sylvia. She leaves to cherish her memory one son, Cecil Vann (Pamela) of Leesburg; two additional daughters-in-law, Barbara (widow of Malcolm, Jr.) of Princeton, N.J., and Deborah (widow of John) of Marietta, Ga; five granddaughters and their families: Michele Bernard, Carla Miller (Damian), Korynne Bernard, Cortney Giagnacova (Andrew) and Kelly Bernard; six great-grandchildren, one great-great-grandchild and a host of nieces, nephews, cousins, family members and friends.

A celebration of life will be held at 11 a.m. Saturday, May 14, at East End Baptist Church. She will be laid to rest in Carver Memorial Cemetery. Professional services with dignity have been entrusted to Crocker Funeral Home Inc.