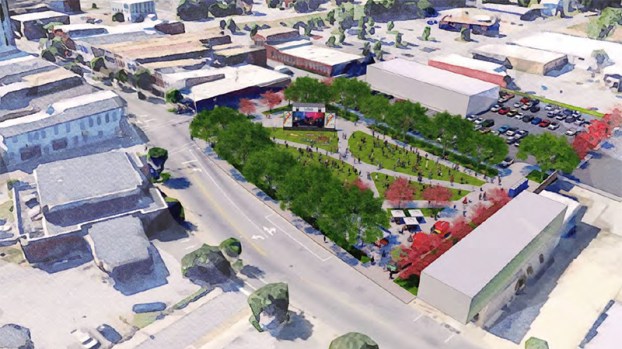 A festival event park downtown on the corner of South Saratoga and West Washington streets could be ready to host events by next summer, according to city officials who briefed the Economic Development Authority board at its May 11 meeting. 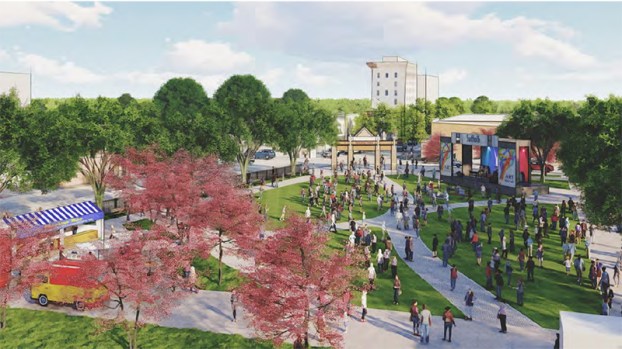 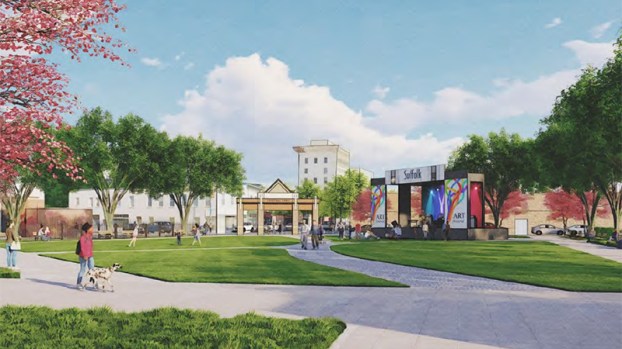 Downtown’s festival event park could be ready in time for the 2023 TGIF summer concert series, a Suffolk annual tradition at two of the city’s parks, city officials said.

Deputy City Manager Kevin Hughes, speaking at the Economic Development Authority’s board meeting Wednesday, said the project is at the 35% design phase.

“It’s our hope that next year’s TGIF concerts and our business appreciation event will be hosted at the park,” Hughes said.

Currently, the city hosts TGIF concerts at Constant’s Wharf Park at the Hilton Garden Inn-Suffolk Riverfront along the Nansemond River, and would look to move that to the new festival park site. The city also hosts TGIF concerts in the northern part of the city at Bennett’s Creek Park.

Economic development manager Deanna Holt noted that the original idea was for the festival park to go behind the downtown courthouse that fronts North Main Street, but in the wake of the Aug. 4, 2020, tornado that heavily damaged properties on South Saratoga and West Washington streets, the city was able to acquire properties in the area and accelerate the process of creating a downtown park.

“With the unfortunate events of the tornado damaging buildings along Saratoga and Washington streets, we were able to purchase the corner and be able to move the festival event site to this location,” Holt said.

She said it would allow for nearby residents and employees of downtown businesses to enjoy being outside downtown. That will include the future residents of the condominiums that will go in the former Suffolk News-Herald building on South Saratoga Street. The building was heavily damaged by the tornado.

“This site will allow for green space and allow the tenants in the surrounding lofts and apartments to come out,” Holt said.

It would also provide a prominent downtown space for bigger city events such as the summer concert series. It would use a mobile stage setup from the city’s Parks and Recreation Department to allow the city to explore different positioning of the stage for a more permanent stage in the future.

Along the perimeter of the festival park will be a separation between pedestrians and the traffic on West Washington Street, along with an area to support vendors for events, with 12 to 15 parking spaces at the park site. It will not have a permanent restroom area, but it will have a screened area to support portable restrooms. There will also be a prominent monument entry at West Washington and Saratoga streets.

The former Brandon House furniture store on West Washington that was heavily damaged by the tornado is scheduled to be torn down as part of the project, but crews are looking for all of the gas lines so they can be shut off ahead of the demolition, which is slated for the end of June, Holt said.

The festival event park will be just down the street from the new downtown library slated to be built.

City officials have projected that the festival park could attract more than 100,000 additional people downtown yearly to support its retail, restaurants and other services.

The city has set aside $150,000 in the current fiscal year for the festival park through its capital improvements program and plan, and an additional $550,000 over the next two years is slated for the project, but that money would have to be approved by City Council when it approves subsequent CIPs.

The Planning Commission last year voted to recommend changes to the city’s downtown master plan to allow for the festival park.

The site of the festival park used to be home to the Suffolk Hotel in the 1880s, and after that burned down, it was replaced by the JC Penny Co. building. Hughes said previously that it wasn’t as interesting a building but was prominent from the corner.