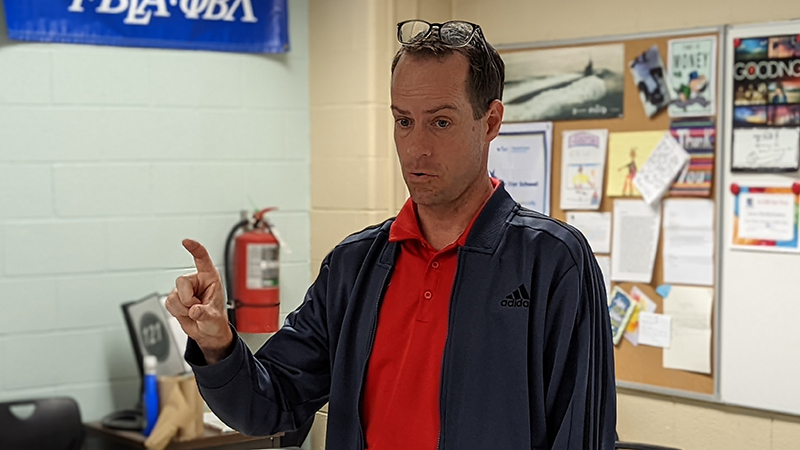 When Jason Bartholomew retired from a 21-year career in the Navy, he thought he would carve out a new path as a financial adviser, but with more sales involved than he was comfortable with, he rerouted.

Instead, when the Virginia Department of Education decided to make personal finance a graduation requirement, Bartholomew figured his skills would be needed, and better suited, for the classroom.

Now in his ninth year as an economics and personal finance teacher at Nansemond River High School, Bartholomew, 48, was recently named Suffolk Public Schools’ 2022 citywide Teacher of the Year. No one earns it on their own, he said, and he feels blessed to have spent his entire teaching career at Nansemond River.

“It’s an honor for me to be recognized,” Bartholomew said on a recent morning during his Block 2 accounting class. “However, to me, it’s a little more complicated than that in the sense that I think there are plenty of teachers that have the credentials and the pedigree that are much more qualified for this recognition than me.”

In the Navy, he admits to chasing awards, recognition, rank and medals, but he said as a teacher, his focus is elsewhere.

“I’ve done all that, and so as a second career, that’s really not my objective,” Bartholomew said. “I don’t need any of the personal recognition. And so, when I come in here, I honest to God make it about the classroom. How can I be most effective in the classroom? I’m not chasing anything else. I’m not trying to become an administrator. I’m just not trying for all those things that are personal accolades. Now, that said, it’s an honor, right? It’s an honor for people to notice and for people to give me validation.”

It’s that modesty and his background that students say give him credibility and make what he teaches them relevant and interesting.

“It’s not like he’s trying to form a certain type of way for people to look at him,” said junior Antonio McCullough, 17, a student in Bartholomew’s accounting class. “He just teaches how he feels is best, and he comes off as very original and very genuine. And I think it carries over.”

Senior Matthew Shaffer, 17, said it’s Bartholomew’s personal touch that has impressed him. In his second year with Bartholomew as a teacher, Shaffer, who took economics and personal finance last year while in virtual learning, recalled getting a handwritten birthday card from him in the mail.

“I was very impressed,” Shaffer said. “During virtual, he did a really good job of making sure that, not only was he teaching, he was also giving us time to do the work and making sure that we understand. He also did a lot of out-of-class stuff if we needed help.”

McCullough said it was different learning virtually, but Bartholomew still made the class lively and engaging.

“It was different, but the way he teaches, he gets to the point, and it’s so hands-on that you really can’t tell the difference whether you’re virtual or not,” McCullough said, “ because he’s going to make sure you know everything.”

And in person, he was that much more effective.

“It helps when you’re in person because you’re there, you’re witnessing him and looking at him and he can look in your eyes and gauge whether you’re following him or not,” McCullough said. “He’ll stop and ask you questions, see if anybody needs to catch up or go back. He makes sure that everybody is on track and on pace and has everything down that he wants us to have.”

Bartholomew said he’s learned to be vulnerable and be honest in the lessons he shares with students as it relates to his classes.

He doesn’t promise everything to be light. There’s only so much, he said, to make insurance or identity theft fun, but he tries to make it current —- this year he’s talking about inflation more than he ever has, for instance — and he takes a vested interest in each student.

“When I first came into his class, I was late because something weird happened to my schedule, and he was just very welcoming,” said junior Rachael Fitzgerald, 16, a student in his accounting class. “I didn’t understand any of the stuff that they were learning, but he honestly explained it as if I already knew what was going on. And it honestly did help me.”

He uses a variety of teaching styles to get his messages across, though mixing in stories, lectures, videos and repetition.

“When I do lecture, I take pride in the fact that I try to take some of these concepts and I make them simple,” Bartholomew said. “I try to boil it down to the basic concept because they’re not going to remember the details when they get out in the real world, but they might remember a phrase or a topic or a story, or, ‘he’s dumbed that 401k down so I can make sure I understood what a match was,’ or, ‘it’s free money and Mr. B said I needed to take advantage of that.’”

His students say he keeps them accountable and doesn’t baby them.

“He showed me not only how you can teach without being super formal … but responsibility (and) time management is a big one,” Shaffer said, “because obviously, I want to get my work done there so I can play. He’s very much one of those work-hard, play-hard kind of people. I definitely picked that up from him.”

But he also wants everyone to be comfortable, enough so that he has a ping pong table in the back of the class and he’ll share of himself, whether it’s tidbits about his weekend or spending the money he received for the citywide teacher of the year honor and having a class party.

“I always knew I could go to Mr. B because I knew he wasn’t some strict, mean teacher,” Fitzgerald said. “He’s honestly like that cool uncle.”

Bartholomew, who spent six years as an enlisted nuclear mechanic on submarines before converting to an officer working in logistics and supply in the business side of the Navy Supply Corps. In his last few jobs in the Navy, he ran budgets and finance, and learned about accounting in the Navy, having never taken a class in the subject. He said he continues to adjust from being in the Navy to being a teacher.

“I think the transition is still happening,” Bartholomew said. “In some sense, I didn’t have the horror stories I’ve heard of some military that had made the transition and just can’t deal with students. There are times when I wish there was more structure in the students than what there is, so I have those feelings, but it’s been an easier transition. I’ve had to change a little bit. I’ve had to realize that these aren’t your 20-something sailors. These are 17-year-old kids who are still trying to figure things out and, they’re living a different life. So I’ve had to loosen up a little bit.”

And students say that shows, but he also brings a structure they appreciate.

“You can see that he cares and he shows it,” McCullough said, “and he’s not just a teacher putting on a front. He really means it, and he really wants you to succeed.”

Teachers of the year