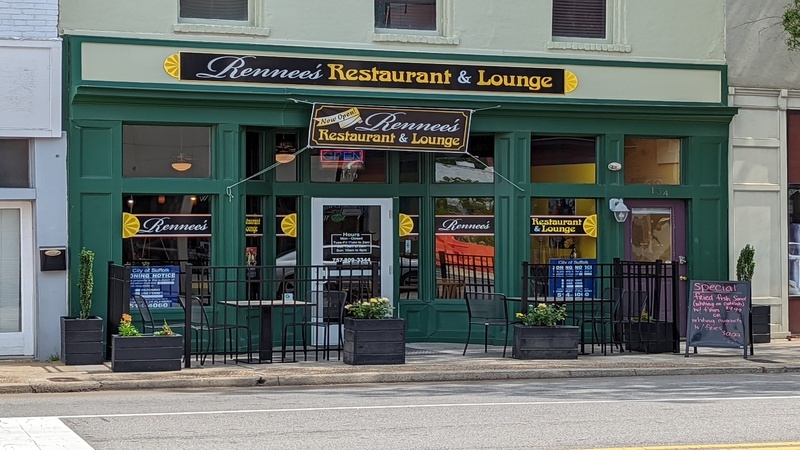 Rennee’s Restaurant and Lounge co-owners Jeffrey and Rennee Townsend want to offer live entertainment at their restaurant at 156 W. Washington St. until 2 a.m. on weekends. Jeffrey Townsend said that if the city restricts his hours, “you’re restricting my business.” Jimmy LaRoue/Suffolk News-Herald

It comes down to what the city wants its downtown to look like.

Will it be a vibrant area full of restaurants and bars that offer entertainment, or will it be stifled by restrictive hours?

That’s at least the perception of Rennee’s Restaurant and Lounge owners Jeffrey and Rennee Townsend, who want to have extended hours until 2 a.m. during the week, and 24 hours per day on Saturdays and Sundays to offer live entertainment to their patrons. Their restaurant is at 156 W. Washington St. near North Saratoga Street.

Commissioner Johnnie Edwards said there needs to be a long-term solution to the entertainment issue at downtown restaurants and the hours in which they are allowed.

“To try to solve this problem individually, I think, is not the approach,” Edwards said. “We need to have a serious conversation as a city to decide if we want a downtown, or we do not want a downtown, and where that downtown is.”

Currently, live entertainment has to end downtown at 11 p.m. Sunday through Thursday and at midnight on weekends, according to the city’s planning department, due to the proximity of people who live nearby in the center of the city.

The Townsends, who like other restaurant owners in the central business district were recently given a notice of violation for offering live entertainment past the weekday cutoff of 11 p.m. and the Friday and Saturday cutoff of midnight, believe the city is inhibiting their business from succeeding while it loses money as a result. He also cited the possibility of nighttime events at the city’s Festival Event Park, which is aiming for a 2023 opening and is adjacent to Rennee’s Restaurant and Lounge.

“I’m really torn,” Edwards said. “You have a festival park coming. You’re moving TGIF from Constant’s Wharf (Park) to here. This business is adjacent to where the park is going to be. … I’m hoping for foot traffic going from Saratoga Street all the way down to, hopefully across the tracks to the fairground area where there’ll be life in downtown.”

He said they weren’t talking about blasting music in a rural, agricultural district, but in what he hopes would be a vibrant and more festive downtown.

“My argument is this, and I understand there are people who live in apartments, (but) we’re not talking about a suburban subdivision where there should be a reasonable thought that noise should be down at a certain time here in downtown,” Edwards said. “And in downtown, there should be more life, there should be more gusto at a certain time of the day, and I’m sorry you’re being inconvenienced if something goes until 1 or 2 (a.m.), that’s one of the benefits of living downtown. … And if you can’t blast music and have foot traffic and life in a city, then where?”

Rennee’s Restaurant currently has an ABC permit from the Virginia Department of Alcohol Beverage Control, along with necessary permits from the city’s health department to serve food and alcohol from 9 a.m. until 2 a.m. seven days per week.

The Townsends are seeking to use the ground floor to establish a bar and nightclub to allow for entertainment such as comedy, disc jockeys, live music and hookah along with hosting wedding receptions.

Because the city’s unified development ordinance requires businesses to seek a conditional use permit to establish a bar and nightclub within the central business district. The city defines a bar and nightclub as a bar, restaurant or similar establishment in which there is a dance floor or live entertainment.

Rennee’s Restaurant received a notice of violation March 4 for hosting live entertainment, which the Townsends say was a DJ playing music, not something they considered to be live entertainment. They then submitted a conditional use permit request, which brought them to the May 17 Planning Commission meeting for a public hearing.

He said the purpose of having a DJ is to generate business.

“When COVID hit, it hurt a lot of businesses,” Jeffrey Townsend said. “With you all’s restrictions that you all are trying to put on businesses here in downtown Suffolk, it’s not going to grow. We’re not going to grow downtown. They’re going to go to other places to enjoy themselves.”

High Tide Restaurant & Raw Bar, at 130 N. Commerce St., also received a notice of violation, on March 5, and Commissioner Anita Hicks noted that the commission expected to have other downtown restaurants coming before the commission on conditional use permit requests in the coming months due to violations.

One of the property owners, Karen Tew, said she and Katherine Mochurad, the business owner and the other property owner, were not aware of the need for a conditional use permit to have live entertainment indoors. Tew and Mochurad admitted that the restaurant has hosted live bands, acoustic performances and karaoke, largely without issue, they said, and typically it ended between 1 and 1:30 a.m.

“It really affected us when we had to stop, just for that one month,” Mochurad said. “We lost a lot of money. I had to figure out what to do with our staff. The entertainment’s bringing us a lot of money, and you can tell that that’s what the people of Suffolk want. It’s what the business owners of downtown want. I’m supportive of everybody, and I think it should be Monday through Friday through 2 (a.m.). I think maybe a good idea would be, the time that you’re licensed with your ABC, you should be allowed to do the entertainment in those hours.”

“I think all businesses in downtown should be able to operate until 2 o’clock (in the morning),” Mochurad said. “And I think that maybe it is a good idea to look at the ordinances. I know that a lot of the other restaurant owners in town are really bothered by this, and I think that that’s what they want, too.”

Hicks said other restaurants have had DJs as live entertainment past midnight, and recounted her own experience in one of them, but planners said they were never cited because they had not received a complaint about them.

Interim Director of Planning and Community Development Kevin Wyne said a DJ is classified as live entertainment, and because of that, it must stop by 11 on weeknights and midnight on weekends. The restaurant, abiding by the city’s noise ordinance, can still stay open until 2 a.m.

“The reason that we have a conditional use permit requirement for live entertainment is, obviously, there are certain conditions associated with that type of use that City Council at some point felt the need to find ways to mitigate through the conditional use permit process,” Wyne said. “One of those considerations is when the music ceases.”

Commissioner Mills Staylor asked that all businesses be treated equally and fairly.

Edwards said that the issue is bigger than Rennee’s conditional use permit request, and that the commission needs to be on the same page with it. By a 3-3 vote, the commission voted down a recommendation to allow live entertainment there on Friday and Saturday nights from 9 a.m. until 2 a.m. and the rest of the week allow it from 9 a.m. through 11 p.m., along with 12 other conditions. Commissioners Edwards, Hicks and Oliver Creekmore voted in favor, and Commissioners Staylor, Gerald Goodman and Chairman Arthur Singleton voted no.

The commission voted 4-2, with Creekmore, Goodman, Staylor and Singleton voting in favor, and Edwards and Hicks voting no, to recommend the conditional use permit under the 13 original conditions recommended by city planners. That keeps the times allowed for live entertainment at 9 a.m. to 11 p.m. Sunday through Thursday and 9 a.m. to midnight Friday and Saturday.

City Council is expected to take up the issues with both restaurants at its June 15 meeting.

The Townsends said the time restriction is a dealbreaker for them because they would not be able to provide entertainment in the final two hours it is open on weekends from midnight until 2 a.m. Jeffrey Townsend addressed the safety issue, saying he can’t control how people behave, and said it’s not just an issue at places like his, but in other places also.

Police Chief Al Chandler said that he did not want to weigh in on what the board should do in terms of the hours for live entertainment except to say it would have an impact, and that following the ordinances is important, whatever they are.

The commission did agree to send the issue of hours for live entertainment, and overall operation of restaurants, to its Ordinance Committee to review and come back with a recommendation to the commissioners. It would then go to City Council for a vote there.

“It needs to be something uniform that we decide as a city to say, uniformly in these areas of this district, we’re going to kind of bend the rules and say we want this (downtown) to be alive,” Edwards said. “And I think that’s where we are.”