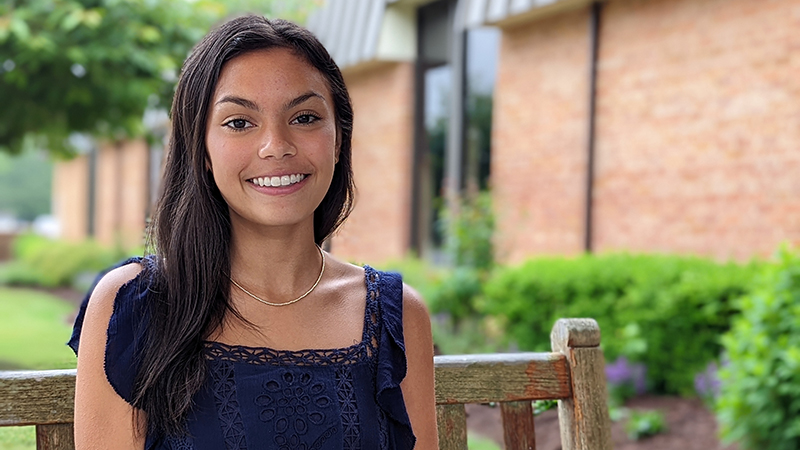 Emily Dumaran spent a lot of time and effort keeping up with her studies before and during the COVID-19 pandemic, and her efforts resulted in her being named valedictorian for Nansemond-Suffolk Academy’s class of 2022, which graduated Friday.

Dumaran, 18, who attended NSA for 13 years from kindergarten through her senior year, will attend the University of Virginia with the intention of majoring in political philosophy, policy and law, hopeful of going down a pre-law track.

“It’s a lot of time and it was a lot of effort on my part,” Dumaran said, “and I feel a great sense of pride in myself for accomplishing this achievement, but I more so wanted to be a valedictorian for my parents (Raymund and Deborah Dumaran), and in no way was there pressure from them or an expectation from them. It was something I wanted, almost, to give to them.”

She wanted the honor as a way to thank them for what they have done for her, having instilled a strong sense of confidence that she could achieve whatever she wanted.

“It was an expectation I placed on myself because I wanted to make them proud, in a way,” Dumaran said, “because they worked so hard to put me through school. And they always push me to be my best and achieve my best.”

During the pandemic, it was easier for her academically than mentally, she said, as she was able to stay organized and focus, but virtual learning was difficult and isolating. She wasn’t able to see as many of her friends, and she didn’t get the same kind of validation from relationships with her teachers as she would have by being in person.

“I couldn’t learn as easily, I felt, because learning through a screen is never going to be the same,” Dumaran said, “but … going through that year with the pandemic definitely made my senior year that much more special just being here in the school, masks on or without — either way, just being present and with this group of kids who I’ve grown up with for 13 years.”

The school, she said, has been like a second home.

“This is my childhood,” Dumaran said. “So having to be away from it for so long was the most difficult part, but coming back to it made it that much more special.”

Dumaran, who played on the Saints’ soccer team and was its captain during her junior and senior seasons, said NSA’s faculty and staff, as well as other students, gave her a sense of familiarity and comfort that made her feel valued and appreciated.

“It’s just a different sense of community,” Dumaran said, “especially being here for as long as I have been. Everyone knows my name, everyone knows my family, I know everyone’s family. It’s just a very tight-knit family, and you can’t find that, really, anywhere else.”

Dumaran was also class president during her junior and senior years, and noted the accomplishment of planning prom during that junior year when she only had a month’s notice to do so.

She said the challenge of it was stressful.

“It was a way for me to give back to the juniors and the seniors and give them something that they could enjoy and appreciate after a year of not having any of those high school clichés,” Dumaran said.

She said her main message for those still at NSA is if you don’t know who you are or don’t know where your life is heading, it’s OK. At times, she said, she struggled with wanting to be popular or embody who a straight-A student should be. However, she said the school has provided her with the foundation to create her own identity.

“If you feel lost sometimes, if you don’t know what you want to do in life, don’t know who you want to be,” Dumaran said, “you can’t let others depict how you live your life, because ultimately, yourself is all that you have in the end.”

Major: Intends to major in political philosophy, policy and law and hopes to go down a pre-law track.