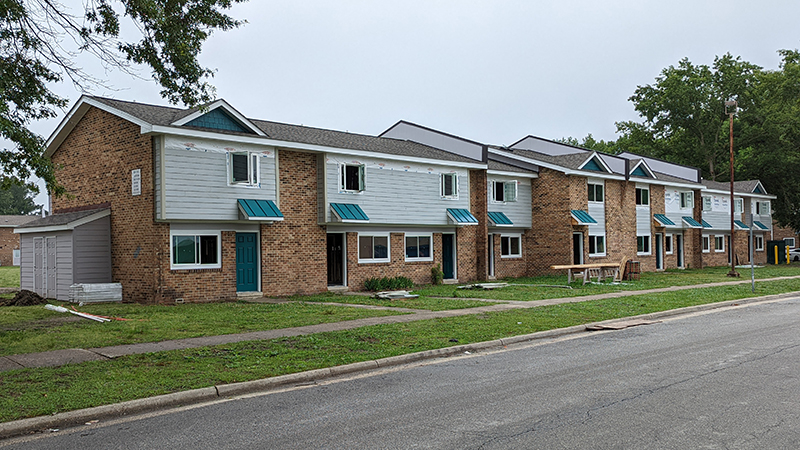 At Eagle Landing — formerly known as Cypress Manor — 87 of its 113 units are complete and just three of the 14 buildings are left to completely renovate.

Nearly all of the buildings at the Eagle Landing apartments have been completely renovated, while across Davis Boulevard at White Marsh Pointe, those apartments are taking shape, a Suffolk Redevelopment and Housing Authority official said.

All five buildings at White Marsh Pointe “are progressing really well,” according to SRHA Community Development Director Tammy Jackson, “which is surprising to me in light of all the problems with the delay in the construction and staffing.”

Nearly all of the curb, gutter and street improvements are finished at White Marsh Pointe, along with the underground utilities. The breezeways in each building are more spacious than in the previous units, then known as Parker Riddick. Most of the balconies on the buildings are complete, and siding and insulation are going up on each.

“They’re on schedule to have it completed in a timely manner and have it ready for occupancy,” Jackson told commissioners at their May 24 meeting.

White Marsh Pointe will have 93 units that are scheduled to be ready in 2023.

Jackson said the project developers are working with the city to determine whether any finished buildings at White Marsh Pointe can be occupied prior to the entire development being completed.

“They’re doing the buildings on the left-hand side first, and we don’t want them to remain unoccupied while all of the rest of the development is being completed,” Jackson said.

Commissioner Michael McBride asked whether roads in the development are paved and structures set up before anyone moved in.

Jackson said that would be the case, but it is likely that the property’s landscaping would not be complete.

“Given that we have such a shortage of affordable housing,” Jackson said, “I’m thinking that they would be considerate of that and hopefully allow us to occupy them as each building is finished to energize the one and allow occupancy.”

Highlighting the affordable housing crunch, Snipes said noted that the agency has 51 housing choice voucher applicants who are actively looking for a place to live. It just admitted 13 applicants into the program from its waiting list, which currently stands at 4,769 people. She said it can take up to 10 years before the housing authority depletes its list.

“There’s way more of a need than there is housing,” Snipes said. “When we opened the list, we were only open for three days, six hours a day, so that is how we got all of these people on the list. So there is a huge need, and right now we are in a really good position because we have available vouchers, but where the issue lies is there is no available affordable housing.”

At Eagle Landing — formerly known as Cypress Manor — 87 of its 113 units are complete and just three of the 14 buildings are left to completely renovate. One of those is expected to be ready this week. Residents who have been living at Cypress Manor have been shifted to other units during construction.

Both apartment complexes are being converted to what was once known as Section 8 housing — now called the Housing Choice Voucher Program. It is the federal government’s primary program to help low-income families, the elderly and the disabled to afford clean and safe housing in the private sector. SRHA administers the program on the local level, and it receives money from the U.S. Department of Housing and Urban Development to administer it.

The $46.3 million project has been structured as a low-interest tax community and is being financed by a mix of tax credits, an SRHA loan, $275,000 from the city and $1 million in grants from the Federal Home Loan Bank of Atlanta. The Department of Housing and Urban Development endorsed the Federal Housing Administration-issued $23.1 million mortgage on the project.

The former Parker Riddick residents received housing choice vouchers to use for other housing while the work has been ongoing, and they will be able to return to the community with no change in rent. Those units had to undergo asbestos abatement before they were torn down and rebuilt.