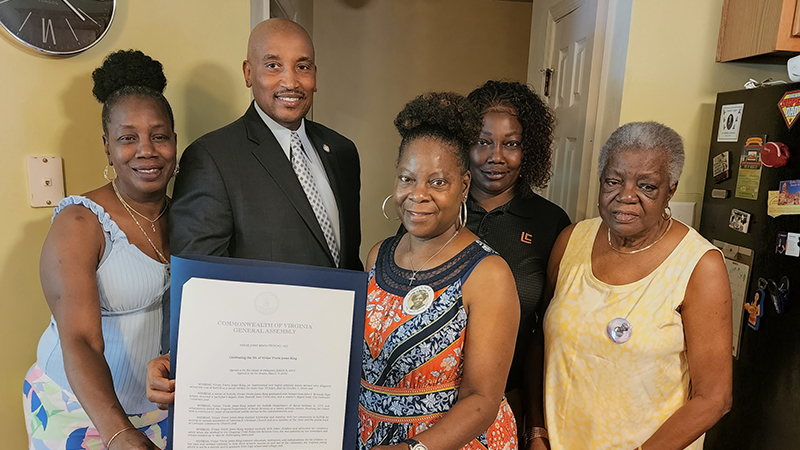 Anthony Gitalado wanted to do something to honor Yvette Jones-King, a social worker who made an impact on his life.

Gitalado grew up in the foster care system with Jones-King as his social worker. She helped him and pushed him to graduate from Hampton High School. Even though he had aged out of the foster system while attending Virginia State University, Jones-King still provided help for Gitalado to be the first in his family to graduate college in 2009.

“She pushed me to go to college,” said Gitalado. “Back then you aged out of the system at 21, but she was still there for me helping out however she could. I’m a first-generation graduate and not many foster kids go to college.”

Jones-King, a Suffolk native, died from cancer in October 2020. She graduated with honors from John F. Kennedy High School before going on to Norfolk State University and Old Dominion University. She joined the Suffolk Department of Social Services in 1979 and later joined the Virginia Department of Social Services as a family services trainer, finishing her career with a combined 41 years of public service to the commonwealth.

To honor her memory, Gitalado started a grassroots resolution. Having never done anything like this before, he worked with state Del. Clinton Jenkins, D-Suffolk, to get it through. The resolution passed in the Virginia House and Senate on March 10.

“I was compelled by the positive impact she made on my life and her peers’ lives,” said Gitalado. “She was a giving person.”

On May 28, Gitalado and Jenkins presented a copy of the resolution to her family. Also attending were her co-workers from the Suffolk Department of Social Services.

“At first when he talked about it, I didn’t understand it,” said Charlene Budd, Jones-King’s sister. “For a client to want to do this was amazing. This is something we can read and put a smile on our faces.”

Since her passing, there are now younger family members who either don’t remember her or never got the chance to meet her. Budd is happy to be able to have this resolution to show them just the type of giving and loving person Jones-King was to those she met.

“If she could help someone, she would,” said Budd. “It didn’t matter if it was finances, resources … or a place to stay. She had a kind heart and it was a gift.”