SCA valedictorian a realist about achievement 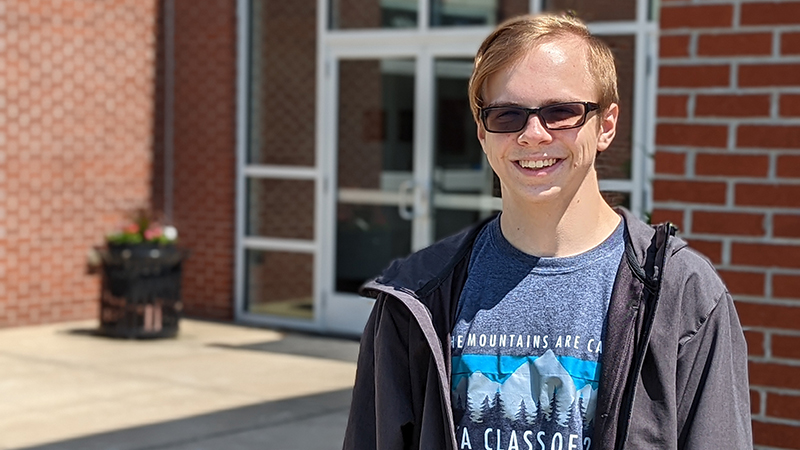 Luke Fowler is a realist when it comes to being named valedictorian at a smaller school such as Suffolk Christian Academy.

He said he has always maintained good grades, dating back to elementary school, and he continued to get A’s in middle and high school. His parents, Brian and Nancy Fowler, have also encouraged him along the way. Still, the achievement was not a surprise — his older sister Grace was SCA’s valedictorian in 2017 — and he put it in perspective, accounting for student struggles during the COVID-19 pandemic.

“I’m not surprised that I got valedictorian, but it doesn’t feel like the greatest academic achievement,” Fowler said, “because first of all, there’s nine people in my senior class. But also, everybody has slipped so much since COVID and procrastination on assignments. And I still procrastinated a lot this year. I guess I procrastinated less than the rest of them.”

Fowler, who has attended SCA since the second grade when it was located at First Baptist Church on North Main Street and called First Baptist Christian School, felt like he hit a “procrastination gap” that he hopes to get rid of as he prepares for college.

“I’ve seen people that are in college now and some of them prefer the online classes because of the convenience, and I see that too,” Fowler said. “But other people have to go to class even if it’s online just to put themselves in the environment to do work. And I’m like, that’s probably going to be me.”

He has spent much time honing in on a career path and major in college and thinks he will find a path in the arts, but he is still working on that.

“My first thing is, my dad says he enjoys his work, but it still sounds boring to me,” Fowler said. “I want to pick something that I’m not going to get sick of, even if I don’t like it some days. And so, what do I do for fun? Video games and drawing — I’ve learned to appreciate a lot more art than I can actually do, but I do drawing for fun, and watching movies and TV. And video games, I’m pretty bad at them. Also, I’m not trying to live off a YouTube channel or something. I don’t think I’m that good anyway. I’m not sure I would want to. TVs and film, there’s a lot out there (and) I know a lot about it, but what’s the dream job? I guess being a film critic because then I watch movies and that’s the main part of my job, but I hate writing and I don’t think I would like writing reviews.”

He draws a lot, and on Sundays he draws in a sketchbook while listening to the sermon. He has also been exploring the use of a digital tablet that has a pen stylus to make the transition from the physical use of a pencil to using a tablet easier.

“The digital art world is getting way bigger and has way more to do with just drawing characters, so I feel that’s where I should go,” Fowler said.

He has caught up with all of the Marvel movies, gotten into cinema classics with a neighbor and more recently has gotten into anime.

He’s interested in potentially going to the Savannah College of Art and Design, but will start out at Liberty University. He said his Christian faith is important to him wherever he is.

He advises others to try to do something fun every day, and weigh what you want to do against the value of doing it.

“Even though there’s a lot of assignments in the school year, at a certain point, I think about it for the value of the grade. … Not all my papers are my best papers. Sometimes I just need to turn things in for the grade because I have more important school work to get done. That’s how I get everything done in the year. And then it’s just a matter of studying enough, just putting in time, paying enough attention to make good grades on things.”