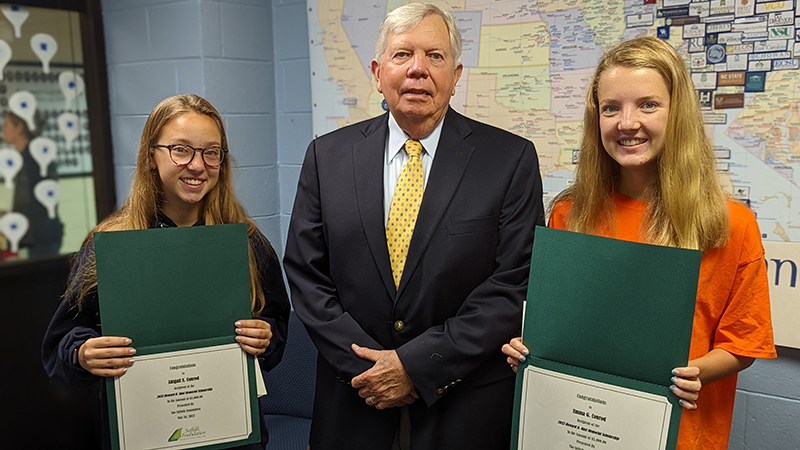 Abby and Emma Conrod both applied for the Howard D. Mast Scholarship figuring, at best, just one of them would receive the $5,000 award.

But the twins, both 18 and having just graduated from Nansemond-Suffolk Academy, had no idea both of them would receive twin, $5,000 scholarships. Scholarship committee Co-Chair Sandy Tucker and committee member and City Councilman Donald Goldberg were on hand the day before graduation to present it to them.

It was a nice surprise, but winning the scholarship also runs in the family. Their brother, Jacob, who graduated from NSA in the class of 2020 and attends the College of William & Mary, earned the same scholarship.

The Mast Scholarship is named for Howard D. Mast, who served as the city’s parks and recreation director from 1949 to 1966 and died in 2006. He was known throughout the region as “Mr. Tennis” and was elected to the Mid-Atlantic Tennis Foundation Hall of Fame in 1995.

Abby, who will attend Liberty University to study nursing, said that with the rising cost of education, the scholarship will be helpful for her and her family with three siblings soon to be in college.

“It’s a great blessing and honor because as people know, education nowadays can be expensive,” Abby said, “so just being able to not have to worry so much about affording my education and to receive this is just a huge blessing, and I’m very, very thankful … that I can spend more time focusing on things like my studies instead of worrying about paying for my next semester.”

Emma will attend the University of Virginia and has not decided on a major, though she is interested in mathematics and education. She echoed her sister’s sentiments but also talked about the meaning of the scholarship itself.

“I’m really honored that I was chosen, and I’m glad that they recognized us,” Emma said. “I don’t know what I did right in the application.”

She needed encouragement from her mom to talk about herself a little more, going the humble-brag route.

“Through the whole winter when I was writing scholarships, my mom was like, ‘You need to be specific and you need to say what you’ve done. You can’t be humble, or whatever,’” Emma said.

In the essay, she needed to write about her character, hard work and dedication, so she focused on taking part in athletics such as basketball, cross country and lacrosse while at NSA. She also wrote about the school’s honor code and being a part of the honor council, trusted to deal with cases among her peers.

“That’s a lot to do,” Emma said, “You have to hold yourself to a much higher standard, I feel, just because everyone’s watching you for an example.”

Abby focused on character traits she has learned in the sports she’s played, having run cross country since sixth grade, and rising to varsity in eighth grade.

“I talked about how that sport specifically really just taught me how to work hard,” Abby said.

At NSA, she took part in four sports in addition to cross country — basketball, lacrosse, track and field, and indoor track.

They said navigating the COVID-19 pandemic was a challenge.

“The pandemic showed me how much a school like NSA cares for the students,” Abby said, “and how even when you’re going through having to learn virtually and all the trials that come with that, how much energy and time all the teachers continued to put in despite the extra work it meant for them. And so as someone who’s been at NSA for 13 years, I’m going to miss the community and how much your teachers care for you the most.”

Emma said it reminded her of the camaraderie and friendships she developed at NSA. Not being able to see those people in person made it more challenging, and it was harder for things like clubs to meet virtually.

Abby recalled someone from William & Mary coming in to speak with students and telling them that they would never be in a place again that has people who care about their future as much as they did there, and being able to trust in the honor system, enough that her phone was on a bench in the hallway during a recent interview as numerous people moved about while graduation rehearsal was starting.

That’s one thing she said she will miss as she heads off to college.

“All the time during free lunch, and on those benches, I just leave my keys, my wallet, my laptop and run to a teacher’s classroom to ask them a question,” Abby said, “and never in my wildest dreams would I ever imagine anything would not be there when I came back, which, that will also be different in college, I guess, so I definitely need to change my habits.”