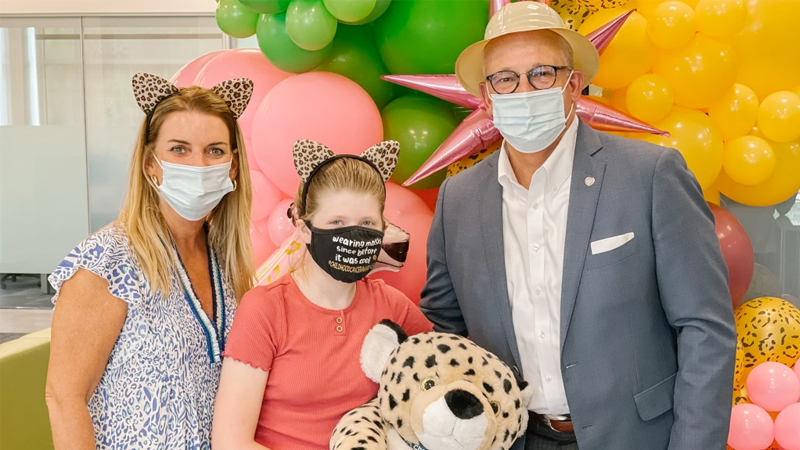 The Suffolk pre-teen, who just finished the sixth grade at Suffolk Christian Academy, loves animals, cheetahs in particular, writing, the color pink, dance and musical theater, knows what’s trending on YouTube and loves being in the company of her friends.

In other words, she’s like many that age with a wide variety of interests and an active social life.

But on Halloween night 2018, Anna was diagnosed with acute lymphocytic leukemia, or ALL. It’s a cancer that accounts for less than half of 1% of all cancers in the United States, with the risk of developing it highest in younger children, especially those under 5.

As she underwent treatment and endured many a hospital visit, it curtailed her dancing and hanging out with friends, but not her spirit and her love for all things cheetah.

With a dream of becoming a zoo veterinarian to work with cheetahs, the family worked with Make-a-Wish Greater Virginia and the Chartway Promise Foundation to make a special wish for Anna come true, and on June 25, she and her family will leave Suffolk to spend a week at the San Diego Zoo Safari Park learning what little she doesn’t already know about cheetahs and giving her an up-close-and-personal look at what it is to care for them. The foundation is the charitable arm of Chartway Credit Union.

“To actually be able to thank a lot of the people that are having a part in bringing this wish to life was very, very touching for our family,” said Anna’s mother, Stacy Weissner. “And Chartway really, really did it up in spectacular fashion.”

Anna did not have a hint of what was to happen until about a moment before the reveal. Her mom had told her they had to go to a meeting at the bank, so Anna had brought a tablet, expecting to be bored.

She was anything but, though she did catch the Make-a-Wish nametag on a person outside the door to the Chartway in Harbour View — as the person tried to hide it — before they went inside and everyone shouted, “Surprise!”

There, Chartway staffers were dressed per the theme of the trip, and it was decked out in cheetah balloons in pink and green, and there was a stuffed cheetah waiting for Anna.

“It was such a special moment to be able to have all those people around us after all that Anna’s been through,” Stacy Weissner said. “It was just a really amazing day.”

Besides Anna and her mother, board members and leaders representing the Chartway Promise Foundation and Chartway Credit Union, Make-a-Wish Greater Virginia President and CEO Sheri Lambert, along with Anna’s father, Will Weissner, and her grandparents Bill and Judy Weissner were able to share in the moment.

Early in Anna’s treatment, the family began working with Make-a-Wish to make her wish a reality, but then the COVID-19 pandemic hit. Even though they had to wait, they all say it is worth it.

“We’re overwhelmed by the generosity and the goodness of people,” Stacy Weissman said.

Anna has always had a fascination with cheetahs, according to her mother, and had a stuffed cheetah with her at all of her medical appointments, treatments and hospital stays.

“She’s always happy to rattle off facts about cheetahs,” Stacy Weissman said, “and she will do her best to convince you that they should be your favorite animal too.”

Stacy Weissman said the family is thankful for Children’s Hospital of the Kings Daughters, and in particular, its oncology department. They have also felt support from SCA and from their church, Westminster Reformed Presbyterian.

“To go through something like that and be able to look around and see so many people willing to support people who were essentially strangers at the start,” Stacy Weissman said, “it really restores your faith in humanity. We are very fortunate that Anna has finished her treatment now. “She is in remission and is doing great. She’s been off treatment for a year now and she’s back to her normal healthy self, and we’re very thankful to say that would not have been possible without the skill of the doctors and the nurses and all of the support that we got throughout her treatment period.”

Anna is very much enjoying the opportunity to once again spend time with friends and partake in her favorite activities.

Her mother expects the trip to San Diego to be a special experience for Anna, and for all of them. Both Stacy and her husband are thankful for understanding Suffolk-based employers — she works for Boyce, Spady & Moore and he works for Tidewater Block. She said in talking to other families, that hasn’t always been the case for others going through similar situations.

Stacy Weissman also is thankful for how Anna’s older brother, William, and how Anna herself handled everything.

“Both of our kids, William with just the way he helped us and loved on his little sister, and Anna, with her maturity going through what she went through,” Stacy Weissman said, “both of them made the whole thing a lot easier on my husband and I and they were superstars, so I’m glad that they get to reap the benefits of the trip. …

“We went through it as a family, and it’s nice that Make-a-Wish is letting us celebrate as a family as well.”