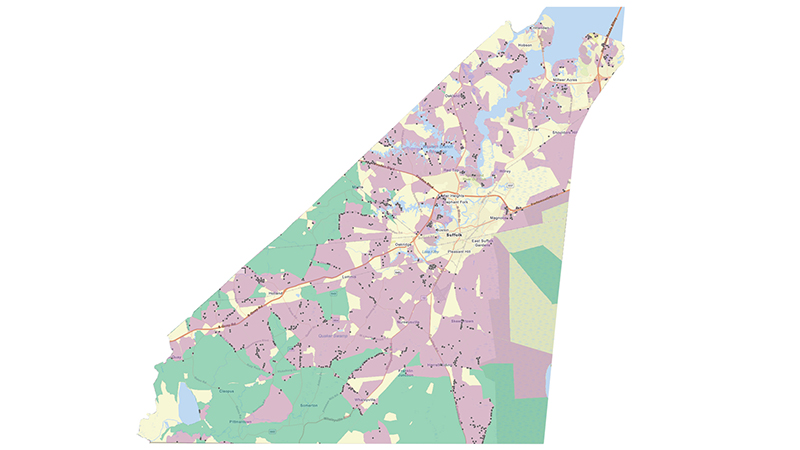 This map, developed by the Hampton Roads Planning District Commission, shows areas of Suffolk set to receive fiber expansion through Charter in purple and areas set to receive fiber expansion through Ruralband in green. Areas not shaded in either color likely already have cable modem service available, and will not be included in the broadband buildout.

If you live on Riverview Avenue in Smithfield, East Griffin Street in Windsor, or you’re one of the 56 households the 2020 Census reported as residing within the 0.17-square-mile town of Capron in Southampton County, it’s a “yes.”

For most of downtown Suffolk and the entire city of Franklin, it’s a “no.”

Residents of Isle of Wight County, Southampton County and the city of Suffolk now can now answer this question on a street-by-street basis by plugging their addresses into an interactive map developed by the Hampton Roads Planning District Commission. The HRPDC map is accessible at https://tinyurl.com/32wxnj3u.

Homeowners and businesses within the buildout’s service areas will, upon its completion, have the option of purchasing a fiber-to-the-home connection — the industry gold standard in high-speed internet.

Charter Communications, the area’s dominant internet service provider, partnered with the HRPDC, Isle of Wight, Southampton and Suffolk last year on a joint application for state broadband funding — netting a $21.1 million from a Virginia Telecommunications Initiative (VATI) grant in December. Subsequent negotiations with the state have since increased the grant to $22.7 million.

Charter and the three localities will collectively contribute another $14.5 million — for a total of $37.2 million.

According to Charter, only residents living in areas where cable modem service isn’t available will have the option of purchasing a fiber connection.

Ruralband, however, has secured buildout rights to roughly 600 additional homes in Isle of Wight’s Smithfield and Rushmere areas, which aren’t presently displayed on the HRPDC map.

“Part of their service area actually overlaps with areas that are already being served by Charter,” said Isle of Wight’s assistant county administrator, Don Robertson.

“One of the major challenges that all of our extended partners are having to deal with is supply chain (delays) and the lack of availability of skilled workers,” Robertson said.

A ribbon-cutting ceremony has been scheduled for June 14 at 2:30 p.m. in Charter’s laydown yard in Suffolk.