‘If you fail, keep going until you succeed’: Lakeland valedictorian follows father’s advice 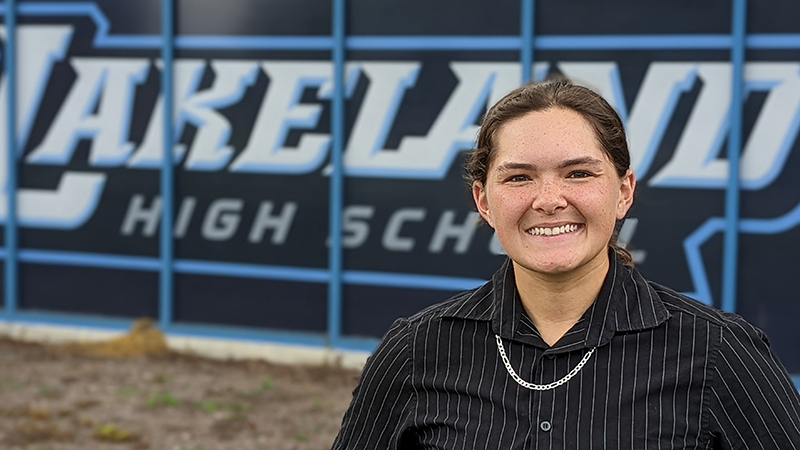 Brooke Howe has been named valedictorian for the class of 2022 at Lakeland High School.

Brooke Howe has balanced academics during the COVID-19 pandemic as part of Lakeland High School’s Project Lead the Way Biomedical Science program, being on the Scholastic Bowl team and being a three-sport athlete, which includes all-region honors as a catcher on the softball team.

She has parlayed her hard work into being named the school’s valedictorian for the class of 2022, and she has designs on being an officer in the Navy after graduating from the University of Virginia with a degree in either chemistry or biology. She has never been happy earning a “B” or an “A-”, knowing she could do better.

“It was never really a goal, it just happened,” Howe said of becoming valedictorian. “My father (Scott Howe) did 20 years in the Navy and he just always raised me like, ‘If you fail, keep going until you succeed,’ and so I took that and I applied that to my academics. … I think him motivating me, that translated into my academics, but I didn’t wake up and go, ‘I’m going to be valedictorian.’”

She said she never felt pressure from her dad or her mother, Lindsey Howe, to succeed in academics, saying they were happy as long as she was passing and not getting into trouble.

Of course, she did much more than that, and she had their backing the entire way.

“Regardless of every one of my achievements, they’ve been there to support me through the way,” Brooke Howe said, “but not at any point in time where they were like, ‘You better get an ‘A,’ or something like that.”

She wants to parlay her degree into eventually serving in the Navy and eventually use her G.I. Bill to go back to school to fulfill a dream of becoming a trauma surgeon on the USNS Comfort, a hospital ship that supports U.S. disaster relief and humanitarian efforts around the world.

When her father retired from the Navy in 2014, she was at the ceremony and heard a number of stories about serving, and since then, it has been something she has wanted to do.

Howe said focus was difficult when she was attending school virtually during the pandemic while in pajamas and with her dog as a constant companion.

“I think the biggest downfall of it as a whole, other than having to adapt to a different setting, was the lab skills that my classmates and I in biomed ended up lacking,” Howe said, “because across the four years, we build every year, so then when we jumped halfway through sophomore and then we come back for senior year, there was a big gap that we had to make up. We did two-and-a-half years of lab skills in a year, and I respect my teacher a lot for getting that done for us.”

She kept up her studies as she was a part of the varsity volleyball, swimming and softball teams at Lakeland for all four years of high school, and she also plays travel softball for the Hanover Hornets. While softball is a passion, she was a part of the National Honor Society, becoming president of it during her senior year.

Looking back, she would advise others to build a support network of people they can trust, and build one of quality not quantity, as that will help prepare them for anything in life.

“At this school, I had a network of teachers, administrators, friends and acquaintances that all supported me,” Howe said. “That was really important.”

She said she also wasted time during her freshman year trying to fit in and trying to be friends with everyone — “You don’t have to be so involved with everybody,” she said.

As she reflected on her high school experience and on her valedictorian speech, Howe noted the effects of COVID-19 on her and her classmates.

“The class of 2022, at least for Lakeland especially, the experience has been rocky,” Howe said. “Between the threats this year to COVID, and just too many things that a high school student shouldn’t have to worry about coming to school or they should just be able to show up, get an education and go home.

“So I reflected on how we could let that hold us back, but instead, most of us really let it drive us, and I was talking about how we can carry that into our future as well.”