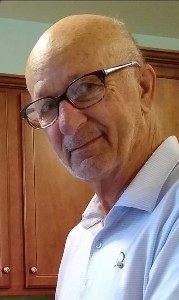 Kenneth Leigh Johnson was born on Nov. 29, 1945, in Bremerton, Wash. Affectionately known as Kenny, he grew from a naughty little boy into a college graduate while living in Minot, N.D. He was later drafted into the Army during the Vietnam War, an event he would call one of the greatest honors of his life.  After becoming a civilian, he found the love of his life, had two daughters and moved to Wyoming to raise them in the wilderness, later adding tens of foster kids to his family.

Eventually, however, after retiring from an immensely successful teaching career he and his wife retired – first to Hebron, N.D. where they lived in snow, then to Crawfordville, Fla. where they lived in heat, and finally to Suffolk, where it was just right (and much nearer to both daughters and four grandsons). It was in Suffolk where his earthly journey ended.

Ken’s legacy survives in all those that have experienced his humor, his music, his warmth and his expertise in education. Ken was the first to offer a funny retort or act silly to lighten a heavy mood – a trait most wish we had and especially enjoyed experiencing while around him. He taught everyone to value the fun in life. Ken practiced music, whether in song or by instrument, like most people breathe – routinely, constantly, and beautifully. His love of music inspired others to join in, no matter their skill level, and add song to quiet moments. Ken had a natural warmth that was obvious even to those he hadn’t yet met (which made him a magnet for new acquaintances) and created lifelong friends. Those in his company felt important and cared for, no matter the circumstance. Ken also had a particular gift for teaching, helpful in his chosen career as a college teacher. He was quick to lend advice or his expertise whenever needed, whether with students outside of class, with business leaders in the areas he lived, at church or with friends.

Ken was a lover of the outdoors, evidenced in his extensive travels around the country, his hobby of fishing (but not really catching) and his regular attempts to best the game of golf. He could often be seen tending to the garden, going for walks or spending time in his screened porch. He played basketball, soccer, frisbee, whittled, fished and fenced with his grandsons – proving he could turn any day into the best day outdoors with Papa/Paypa. Ken represented the good that we all need in our lives. We will all miss him more than words can say.

Ken is survived by a loving family: his wife, Laurel; his two daughters, Katherine and Kristine and their families (including four grandsons), his two living sisters, Elayne and Karen and his brother, Richard as well as his extended family, foster kids and an abundance of friends.

A private celebration of Ken’s life was held on June 10, at Main Street United Methodist Church. Contributions in memory of Ken can be made to the Disabled American Veterans. Condolences may be registered at RWBakerFH.com.