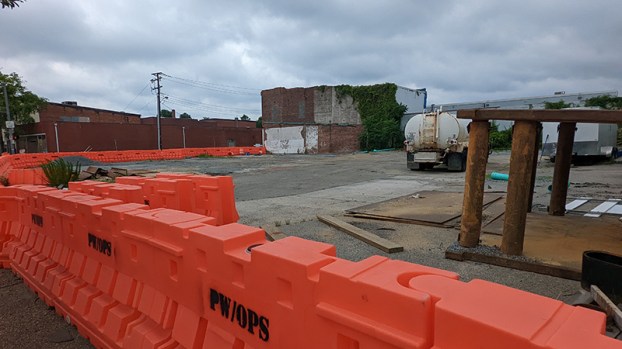 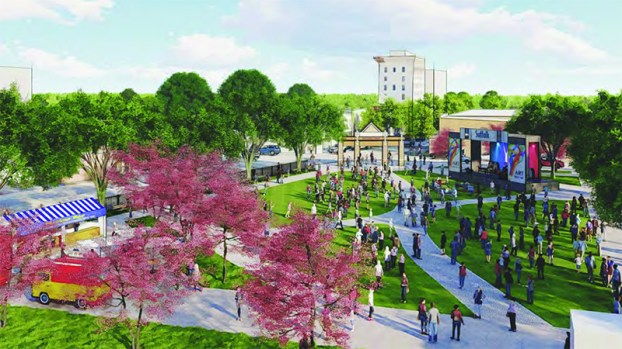 A rendering of Festival Park at Saratoga and Washington streets in downtown Suffolk.

The tornado that wreaked havoc on downtown nearly two years ago is about to spawn what the city hopes will be a vibrant outdoor venue that will help revitalize that area.

The Historic Landmarks Commission on Thursday unanimously approved the certificate of appropriateness for plans to build the Suffolk Festival Park, which will span five properties at South Saratoga and West Washington streets. One of those properties is the former Brandon House furniture store at 219 W. Washington St. Gerry Jones, city director of capital programs, said he expects that building to soon be torn down to make way for the festival park.

City Council will still have to approve a conditional use permit for the project, since it is required for parks and open space in the central business district prior to site plan approval.

City officials project that the new park could draw more than 100,000 additional people downtown yearly to support its retail, restaurants and other services.

The city has set aside $150,000 in the current fiscal year for the park through its capital improvements program and plan, and an additional $550,000 is expected to be spent on the project in the next two years, but that money would have to be approved by City Council when it approves subsequent capital projects.

The Planning Commission voted last year to recommend changes to the city’s downtown master plan to allow for the festival park.

The new park will feature a main entrance at West Washington and South Saratoga streets with three grand entrance arches, approximately 36-feet-by-20-feet, 10 inches, 34-feet-by-18-feet and 29-feet-by-14-feet, 2 inches, that will be designed to complement the materials and forms of the new, nearby downtown library to be built. It will also have 4-foot-tall decorative black aluminum fencing along the park’s perimeter ending in 5-foot-tall pylons at the minor entrances and matching materials used at the front entrance.

“You’ll hear me talking about the library and the park together,” Jones said, “and there’s a reason for that, because this is a pretty substantial investment the city is making on this part of Washington Street.” It also coincides with the new downtown master plan.

The center arch, at 34-feet-by-18-feet, will have a 23-square-foot sign that says “Suffolk Festival Park.” A portable stage and removable bollards, or small posts, will also be incorporated as needed, but were not part of the application since those items can be removed.

There will also be decorative concrete paved paths to connect the entrance, a food truck area, temporary restrooms and parking. An 8-foot-tall screen at the west edge of the site will run parallel to the wall of the adjacent building and will be made of wood or similar material and stained in what officials say will be an appropriate opaque color.

The site will have parking for 40 cars with access at South Saratoga and Jackson streets, and lighting for the parking area will use LED pole kits with two 200-watt LED lights that comply with unified development ordinance lighting standards.

When questioned about whether there would be sufficient parking, Jones pointed to other public parking in the downtown area, including the new library, South Saratoga Street, Cherry Street and the Godwin Courts Complex lot. There is also a public parking lot and street parking on North Saratoga Street with more than 70 spaces, and additional parking along adjacent streets.

“You may have to walk a block or two, but there’s parking in the immediate downtown area to support it,” Jones said.

The park will allow for unobstructed views for people walking from the corner of North Main Street to West Washington Street. The city projects the site to become a new home for the farmers market, which currently is at the city’s Visitor’s Center at North Main Street and East Constance Road.

According to planning documents for the park, its goal “is to make it easy to plan events in downtown. By providing the permanent infrastructure to potential event organizers, the city can incubate new events, activities and promoters (and) it reduces the need to close streets in downtown for weekend events and yet still functions during the week (as) a public park.”

The city expects demand to increase for retail, restaurants, housing “and eventually may become an amenity that attracts new office users” and brings new residents into downtown for the first time.

City officials have said they expect that the park could be ready in time for the 2023 TGIF summer concert series, an annual tradition in Suffolk at two of the city’s parks.

“We’ve taken a lot of care into making sure that some of these elements that are in the downtown, especially this part of Washington Street as well as what has been established with the new library design,” Jones said, “which has already received a certificate of appropriateness from this commission, you can see we’re taking great care to making sure this, and the elements that we’re doing in this park really complement the features that have been established downtown and have been established with the new library.

“This part of Washington Street, when all of this is put together, I think it’s going to be a very seamless connection — you want that traffic to flow between all these sites and have some relationship to each other from an architecture and landscaping standpoint, and I think we’ve achieved that.”