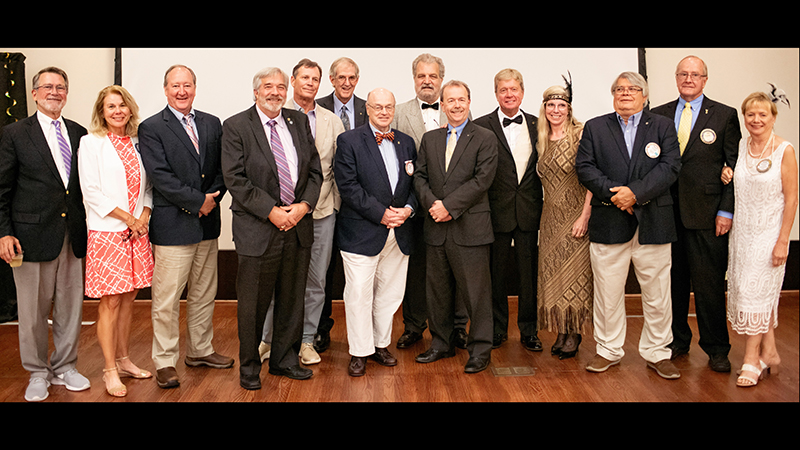 As the Suffolk Rotary Club marks its first 100 years of success and public service, Jackie Cherry knows it’s all been a team effort.

“All club members have brought something to the table and still do, today,” said Cherry, a club member since 2010 and a past president. “It’s the contributions, from every member, that make this organization so wonderful to be a part of.”

To celebrate the club’s good work over the last century, Cherry, along with about 115 other Rotarians, gathered on May 24, 2022, at the Suffolk Center for Cultural Arts for a three-hour program.

Chartered on May 1, 1922, the club is traditionally known for its professional and personal leadership-building initiatives, and for giving much-needed funds to the community, averaging some $50,000 annually, and reaching as high as $88,000.

Club members meet weekly at the Elks Lodge on Constance Road, with its general membership numbering around 75. Membership and meetings are open to the public; perspective members must have a sponsor.

The club also contributes to about two dozen charities, including American Legion – Boys State, Boys and Girl Scouts of America and the Nansemond Suffolk Rescue Squad.

Contributions from the Suffolk club to the community would not be possible without its members’ passion for humanity.

“Our ‘secret to success’ is caring,” said Cherry, a Chuckatuck resident and event co-chair. “We care about our community, its citizens, the young people. Our motto is, ‘Service, Above Self.’ ”

Over the last century, the club has experienced steady, sustained growth, said Cherry, with membership now numbering around 75. But, it’s hard to tell when the club was really at its peak.

“Our ‘hey day’ is every day we accomplish and support our community, both, local and internationally,” said Cherry.

Looking ahead to the next 100 years, Suffolk’s community should continue reaping benefits from the club, as long as the public doesn’t get complacent.

“No organization should be taken for granted,” said Cherry, who retired in 2018 as the Suffolk Center for Cultural Arts’ chief executive office and executive director. “Rotary was the first civic club in Suffolk and I believe it’s here to stay, thanks to the committed Suffolkians in our city.

“Our cup is halfway-full,” she continued. “It’s our young folks who will make it even better. If you see those kids who receive the scholarships each year, and hear about their accomplishments, you would know our future is bright.”

Jack Nurney remembers when he was once one of the youngsters to which Cherry refers. His involvement with the Suffolk Rotary Club began around 1942, when he was about 15.

“I remember growing up as a teenager, the Rotary Club and the Lions Club, were the two organizations that were active in Suffolk,” said the Suffolk native, who served as club president for a year in the 1960s. “The business community was also active in those organizations.”

Now 93 and living with Ann and Jeff Davies, his daughter and son-in-law, respectively, in their Riverview home, Nurney didn’t make it to the club’s centenary celebration, but remains proud of the club has fond memories of it.

“We are known for good food and we have a lot of kidding going on during the meetings,” said Nurney, who used to work in the insurance business. “The club president is always a ‘sitting duck’ while members ‘take shots’ for the whole meeting.”

Nurney agrees with Cherry that the club will endure and prosper for another 100 years.

“It should, if civic-minded people still exist in 100 years; young people seem to have different priorities these days,” he said. “But we have great comradery, and good friends are created through their associations with Rotary and in the business community. Rotary has always been a valuable organization.”