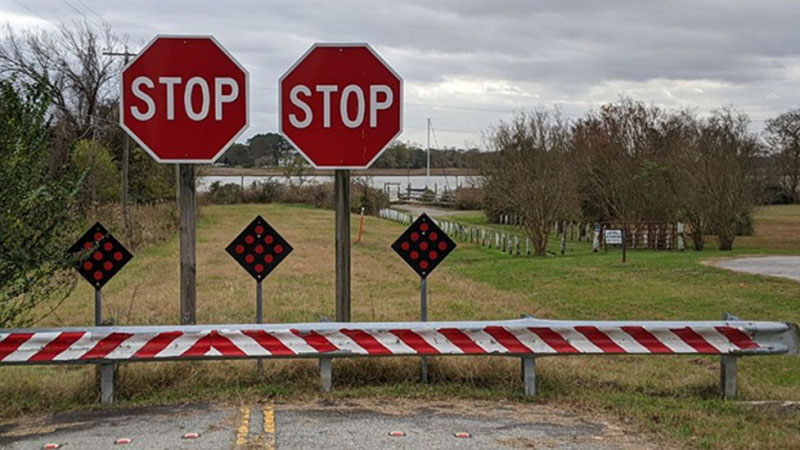 Suffolk City Council adopted a resolution at its June 15 meeting to endorse a Smart Scale project application to replace the Kings Highway Bridge. It also endorsed SmartScale project applications to put in a bus route from Windsor to Suffolk, add a left-turn lane onto Bridge Road for turns onto College Drive and widen Shoulders Hill Road. (File Photo)

A trio of North Suffolk road projects and a new bus route to Windsor will be put into a state funding program following recent City Council approval.

The projects include widening Shoulders Hill Road from two to four lanes — in two phases and covering 1.4 miles — and adding a multi-use path, a 30% design plan for a King’s Highway Bridge replacement, a left-turn lane to be added to turn from Bridge Road onto College Drive and a new Suffolk-to-Windsor bus route.

As part of the Virginia Department of Transportation’s SmartScale application process, council needed to adopt a resolution to be considered for funding, which it did at its June 15 meeting. If any of the projects are approved for funding, the money would come in fiscal 2026 and 2027.

The program is how the agency prioritizes projects with limited tax money available to pay for them, taking into account factors such as traffic safety and congestion, the environment and economic development. Once projects are scored, the agency’s Commonwealth Transportation Board chooses which projects will receive funding.

Pre-applications were due by April 1, and final applications are due by Aug. 1. SmartScale scores for submitted projects are scheduled for a January release, with the projects chosen for funding in mid-June 2023.

The widening of Shoulders Hill Road would go 0.65 miles from Laycock Lane in the north to Bennett’s Creek Park Road near Creekside Elementary School to the south in the project’s second phase at an estimated $9.6 million.

The city’s most recently adopted capital improvements project and plan calls for nearly $5 million to be spent on phase two in fiscal 2027. Only first-year funding in the CIP is guaranteed.

The third phase of widening would include another 0.75 miles from Bennett’s Creek Park Road in the north to Pughsville Road in the south. The city’s CIP has allocated $4 million for phase three in fiscal 2027, and another $11.7 million to be spent in years six through 10.

If SmartScale money is approved, the city would receive nearly $1.6 million and would have to contribute the same amount as a match.

The city is currently in the midst of a $24 million project to make improvements at the intersection of Bridge and Shoulders Hill roads — the project being the second-largest in the city next to the $84 million expansion on U.S. Route 58. It is expected to be finished by fall 2023.

Shoulders Hill Road is being widened from two to four lanes for about 1,500 feet south of the intersection, and a free-flow right-turn lane onto Bridge Road is being added.

In October, council approved a resolution calling for support from the Virginia Department of Transportation to secure the money to design and build a new King’s Highway Bridge. City staff has recommended a new, 35-foot high bridge over the Nansemond River along Five Mile Road between Godwin Boulevard and King’s Highway, a recommendation a previous council had backed more than 20 years ago.

Based on 2030 estimates, the bridge would cost $186.3 million. Public Works Director Robert Lewis told council in October that multiple funding options could be available, including both the State of Good Repair and the SmartScale programs. VDOT’s State of Good Repair program provides money for deteriorated pavements and bridges in poor condition.

Council’s adopted resolution calls for the development of concept alignments and completing the National Environmental Policy Act review for the 30% design plans and preliminary bridge plans.

A second left-turn lane on Bridge Road would provide drivers another southbound option onto College Drive.

It was one of the proposed improvements offered when VDOT surveyed residents earlier this year as it prepares recommendations on possible lower-cost improvements to a 10.5-mile stretch of road through North Suffolk.

A proposed Suffolk-to-Windsor bus route would provide service from the city’s Downtown Transfer Station to the Windsor public library, with stops at Sentara Obici Hospital and the Shirley T. Holland Industrial Park in Isle of Wight County. The county and city are submitting a joint application for SmartScale money.

Plans for a Suffolk-to-Windsor route appeared in Suffolk Transit’s 2019 strategic plan and was discussed at a 2020 meeting of the Hampton Roads Transportation Planning Organization. The strategic plan estimated daily operating costs in 2019 to be $252 and capital costs at $81,000 for one van.