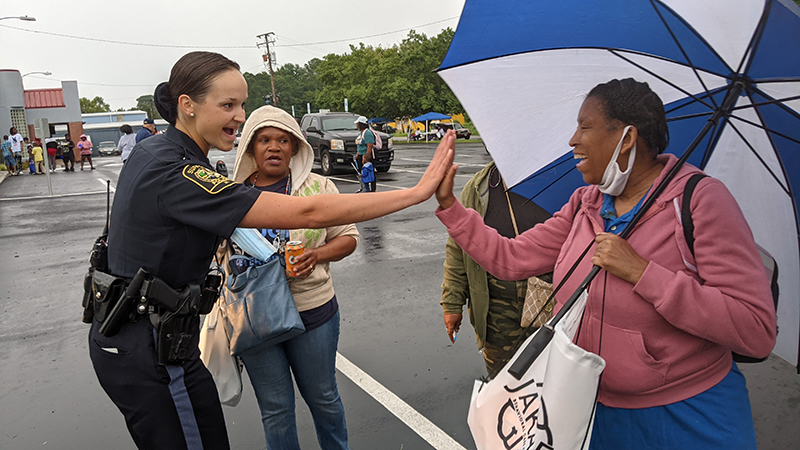 City officials gathered outside the Suffolk Visitor’s Center Tuesday, June 21 for the community kickoff to National Night Out 2022.

Mayor Mike Duman said the event, “beyond a shadow of a doubt,” is his favorite event the city does and that it has been one of the best things going for the city. He said his state of the city theme, “Together, One Suffolk,” embodies the kind of event that unites people.

“When you look at National Night Out, what is there that would exemplify that thought more than National Night Out,” Duman said, “because it doesn’t make any difference if you live in a rural Suffolk, if you live downtown if you’re living in northern Suffolk, everyone’s got the exact same thing on their mind. They’re doing the exact same thing at that time.

“What other event, what other occurrence could there be that brings all our citizens together at one time, with one goal, and that’s to send crime somewhere else, to address an issue at the top of everyone’s mind.”

He thanked volunteers for the event, along with law enforcement and public safety personnel for what they do every day, and he thanked residents for their cooperation and their willingness to work together to combat crime in the city.

City Manager Al Moor said last year’s event “was a new beginning for us” to have the event again after the COVID-19 pandemic forced the cancellation of the 2020 event, giving everyone the opportunity to come together.

“It’s important that we continue to do that,” Moor said, “especially right now. Across the nation, we’ve seen over the last several years, we’re experiencing a lot of crime (and) violence, and it’s across the nation. But we have our share of it too, and our officers are out there every day. I can’t say enough to them for what they do.”

Moor said National Night Out is a symbol of how the city can work together to tackle issues in the community.

Buie said it’s no surprise the city has hosted one of the top National Night Out events every year. It comes down to its people.

For more information on Suffolk’s National Night Out, including a resident guide and registration form to host an event, go to www.suffolknno.com.