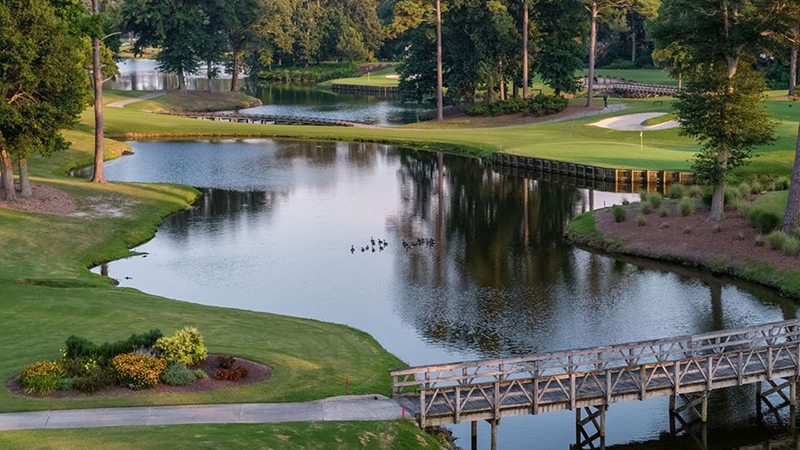 The 109th Virginia State Golf Association Amateur Championship comes to Suffolk June 27 through July 1.  This prestigious event features 120 of the state’s top golfers, many of whom had to participate in qualifying rounds, competing for the coveted crown at Cedar Point Club.

“It’s the biggest amateur tournament in the state. We’re very close with the VSGA and it’s great that they’ve called on us to host this championship,” Reid Derco, PGA Head Golf Professional from Cedar Point Club, said. “It’s always good when we can get our name at Cedar Point out. We used to be nicknamed the best hidden secret in Suffolk, but over the last few years we’re not hidden anymore.” commented.

Derco praised the hard work of the staff and management team to put Cedar Point not only on the map on a local level, but statewide.

The event was last played at Cedar Point in 2009 when Brinson Paolini rallied from five strokes down to edge Richmond native Lanto Griffin, who is currently playing full-time on the PGA Tour.  Richmond’s Jeff Horn won the amateur when Cedar Point hosted in 1982, and well before that it was two-time U.S. Open Champion Curtis Strange taking the title the first time the club hosted the event in 1975.

“Having a title of amateur champion in the state of Virginia is huge for any golfer’s career. But you also have to think that there are a lot of amateurs in the field who very well can move on to higher level than just state amateur golf,” Derco said.  “Hopefully, that is foreshadowing for a few players who are in the field.”

“More than anything else, the great thing about hosting it is we’re talking about 120 of the best amateurs in the state and it takes a number of things to even qualify as a potential host site.  There are a number of clubs around the state whose members simply don’t want to give up their golf course for a few days to host an event like this one.  I think that’s shortsighted and I have a fundamental disagreement with it,” said Cameron Robinett, Cedar Point Club president and chairman.

“All of us in the golf industry have an obligation in a way to give back.  Once every 13 years is not a big ask,” Robinett said. “I look at it as an honor and a privilege to be asked. We’re happy to roll out the red carpet and welcome all these folks.”

When Cedar Point hosted the VSGA Championship 13 years ago, it marked the club’s 45th anniversary. That also proved to be a pivotal moment in the club’s growth, especially during trying economic times.

“It developed quite a bit of membership pride.  I don’t think you can discount what hosting that event did to helping folks stepping up and saving the club,” Robinett said.

Even with the golf course in superb condition, many of the amenities were in need of an upgrade. Yet, many of the renovations done around the club were merely an idea several years ago.

“Over these last few years, we’ve been able to renovate pretty much every area of the clubhouse,” Derco added.  “What I’m most excited about is to open up our doors to these great players that already know what Cedar Point is as a golf course, but they’re going to get the full member experience.”

Out of the 120 participants, there are five Cedar Point members and Suffolk residents who have made the field, including:  Del Baker Jr., Matt Grandy, Carter Smith, Ken Wren Jr. and Trey Wren.

For Cedar Point Club, this won’t be the last championship event they host either.  In 2023, they’re set to host the 2023 VSGA Women’s Amateur Championship.  They’ll become one of only two clubs in the entire state that will have hosted every VSGA Major at least once, joining Farmington Country Club out of Charlottesville.

“This might not be a PGA tour event, but for any junior golfers, collegiate golfers and anyone who’s aspiring to go on to greater things, it’s definitely a worthwhile experience,” said Robinett.  “Watching them watch the best, there’s nothing more fun than that to me.”

Spectators are welcome to attend and encouraged to visit the VSGA web site (vsga.org) for a full detailed schedule, including starting times.