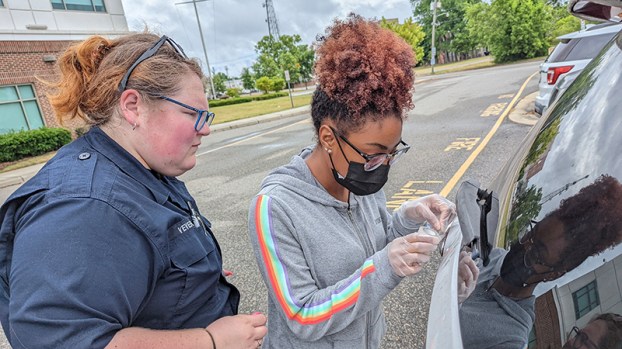 Jean-Pierre Bilé, 13, dusts for fingerprints on the back of Julie Vevers’ Suffolk Police vehicle at a mock crime scene set up as part of CSI Camp, held over four days at the city’s Health and Human Services building. Vevers is a forensic technician with the department and taught students about forensic investigative techniques at crime scenes. 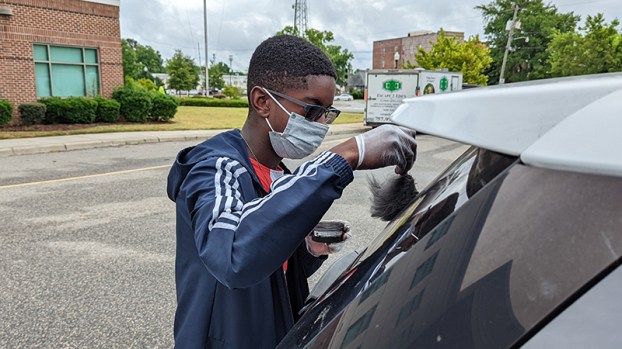 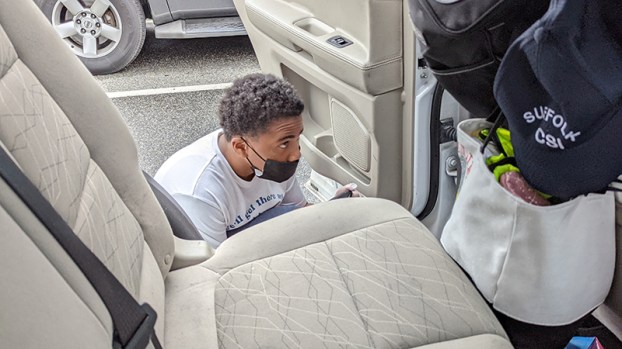 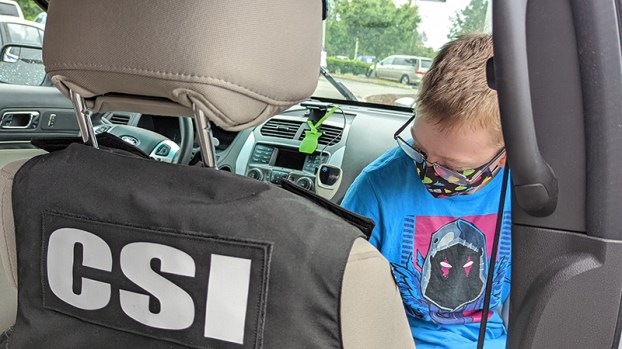 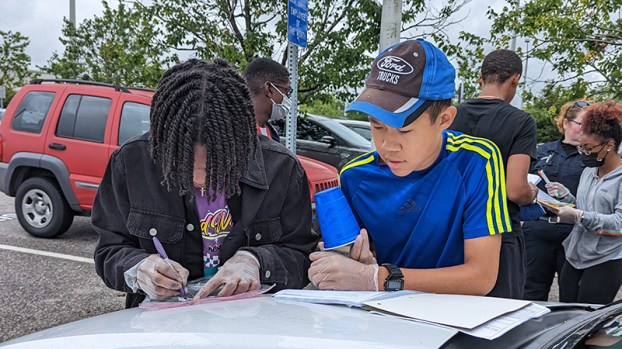 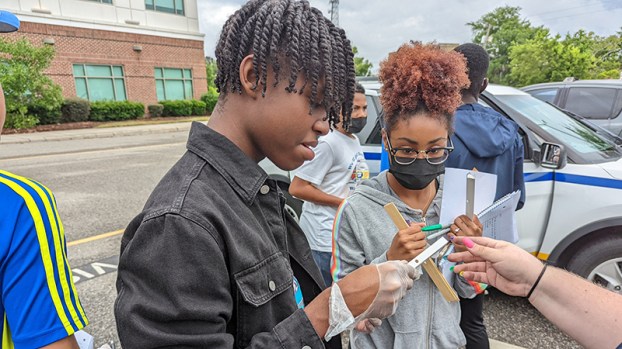 The 12-to-15-year-old students gathered around the vehicle of Suffolk Police Department Forensic Technician Julie Vevers, intently making sketches, dusting for fingerprints and searching inside and out for evidence to determine what might have happened with it.

The protocol was to process the mock crime scene in which her vehicle had disappeared, and when she arrived in the morning, found it with some evidence that wasn’t hers — fake blood, a potential fake firearm, cartridge casings and some receipts. It was designed to get them to think of what someone who would steal a car might leave behind.

“As weird as it sounds, I want them to think like a criminal,” Vevers said as the students searched the car for evidence, “because that’s what I do whenever I go to process a scene, I’d be like, ‘Alright, if I were going to steal a car, I would grab this trying to get in, so maybe we should swab that,’ stuff like that.”

The students, wearing gloves so as to not contaminate anything they might find, documented the scene through photographs, note-taking and sketching as they gathered evidence and then “sent” it to the police lab for processing.

They found numerous items, including a firearm, and two “holes” on the side of the car, but they missed finding one of the two shell casings as they processed the mock crime scene in the parking lot of the city’s Health and Human Services Building.

“How many cartridge casings did you find,” Vevers asked them.

“One,” one student replied.

“You’re missing one, and you’re looking right at it,” she said. “Did anyone think to check that bag, that rainbow bag that’s right there on the ground? You see it? There it is. That’s how easy it is to miss evidence. You guys were running around this car like crazy. You found almost everything. You guys did a really good job. Think of it this way, if you see two holes somewhere, assume that you’re going to find two cartridge cases.”

Vevers made sure to drive that point home while still praising their efforts and enthusiasm for processing the scene, and what they learned over the first two days of the Suffolk Commonwealth Attorney’s CSI Camp.

“We, basically, are trying to teach them how we process a vehicle and how we process crime,” Vevers said. “We deal with a lot of stolen cars here in Suffolk, unfortunately, so this is a good thing for them to see.”

It’s also the reason each crime scene gets a second pair of eyes, according to Joan Turner, community outreach coordinator for the city’s commonwealth attorney’s office.

“After we think we’re finished with the crime scene,” Turner said, “then we get another technician to come in, and that technician will come in and look over it. For this particular camp, since they missed it, we wanted them to see that it takes more than one set of eyes to look inside and outside of a crime scene.”

Students said they learned things they weren’t previously aware of, and some indicated an interest in pursuing a legal or law enforcement career.

“I’ve learned about fingerprints and DNA and lots of evidence and stuff, how to take pictures of the crime scene, and how to assess it,” said 14-year-old Owen Burke.

Derrick Bryant, 15, said he was surprised to learn that the red found at crime scenes isn’t always blood.

“Something I did learn is with blood and red liquid, because they said it could be Kool-Aid or whatever,” Bryant said. “And I thought it was just blood every time.”

The camp is there to clear up those misconceptions, according to Turner.

“There was a student, who on the first day said, ‘Oh, so you guys don’t put your finger on the reddish color stain and then lick it,’” Turner said. “And I said, ‘Oh God, no,’ because we can’t say it’s blood. We say it’s a reddish-colored stain because the lab has to make the analysis. And they said, ‘Oh, they did that on TV.’ I said, ‘Well, TV is totally different from real-life experience.”

It also provides students with some STEM-based learning, showing how science, technology, engineering and math play a part in forensics work.

The 40 students, who were split into different groups and each processed different crime scene scenarios, presented their findings before the end of the camp graduation ceremony and received certificates for their achievement over the four days.

“It’s gone very, very well,” Turner said. “These kids have been awesome this year. They are so attentive. They’re just very interested in law enforcement, whether it’s CSI, being a defense attorney. One of them even told me they wanted to be military police. So it’s really exciting to see their eyes when they see some of the presentations that we presented.”