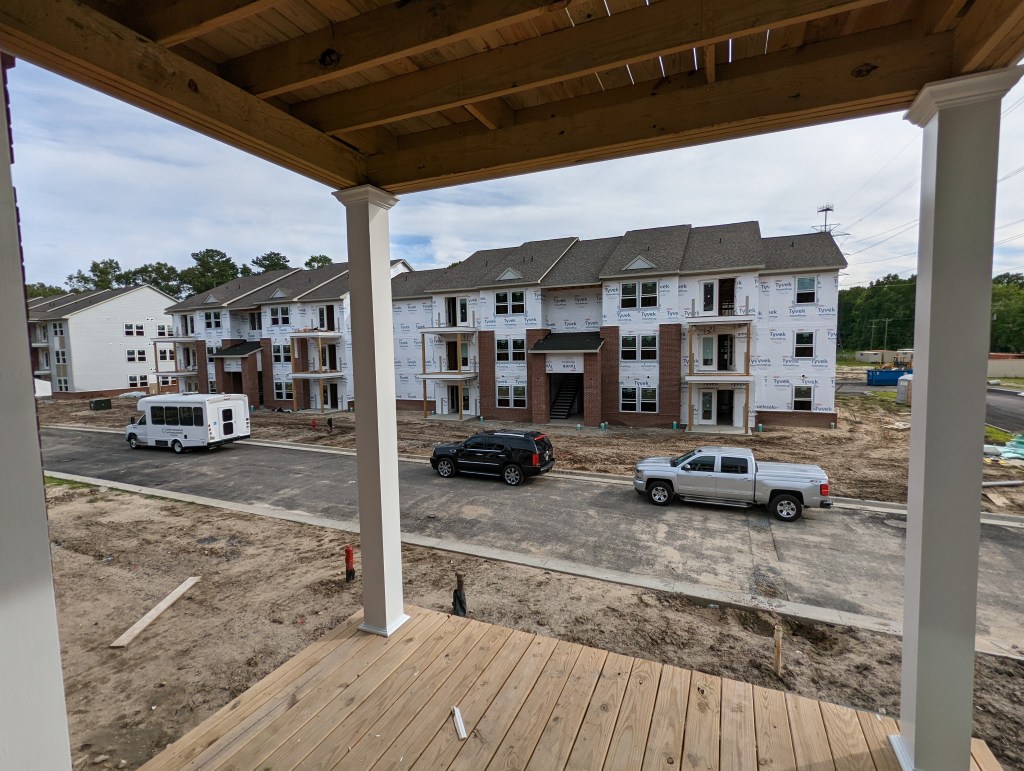 Apartments at White Marsh Pointe will be ready for occupancy by January, according to Suffolk Redevelopment and Housing Authority officials. Across the street, Eagle Landing apartments are expected to be completely rebuilt by November. (Jimmy LaRoue/Suffolk News-Herald)

By January, White Marsh Pointe at Eagle Landing will have been rebuilt and undergone a complete transformation from a run-down neighborhood into a modern apartment community providing affordable housing options in the city.

Located on both sides of Davis Boulevard just off White Marsh Road, it will feature 93 newly constructed apartments on the White Marsh Pointe side of the development, and another 113 apartments across the street at Eagle Landing.

Suffolk Redevelopment and Housing Authority officials toured the development Tuesday, getting a closeup look of the apartments on both sides. Much of Eagle Landing is finished, with final completion expected by November. White Marsh Pointe is not far behind and is expected to be finished two months later, SRHA Executive Director Tracey Snipes said.

Members of the authority’s board were on the tour, including Chairman Quinton Franklin, Vice Chairwoman Clementine Cone, Kenneth Campbell and Regina Hall, and at different points during the tour, touted different features being built into them, including some units that have been designed specifically for people who are disabled.

SRHA has managed the two communities previously, but through the conversion of the property to Section 8 project-based voucher assistance housing, Vista Capital Management, a company with experience in managing low-income tax credit communities, will manage the properties until 2024. That’s when the housing authority will resume managing them.

Both properties will be owned by Eagle Landing Apartments LP, based on a long-term ground lease with SRHA, with it as the 51% general manager and TCG Development Advisor as managing general partner.

Project-based voucher assistance housing is the federal government’s primary program to help low-income families, the elderly and the disabled to afford clean and safe housing in the private sector. SRHA administers the program at the local level, and it gets money from the U.S. Department of Housing and Urban Development to administer it.

People who have been living in Eagle Landing, made up of one- and two-story units, were shifted into other units during construction, as the work has been done in phases. White Marsh Pointe, when complete, will have apartments on three stories. It not only looks different, she said, it feels different.

“In spite of the pandemic, we still have made amazing progress with that property,” Snipes said following the tour. “It’s going to look like a brand-new property, and that’s the goal … for it to be affordable. We also want it to look good. We want people to be proud to pull up to their home and see that.”

The $46.3 million project has been structured as a low-interest tax community and is being financed through a mix of tax credits, an SRHA loan, $275,000 from the city and $1 million in grants from the Federal Home Loan Bank of Atlanta. Mutual Builders of Wilson, North Carolina, is the construction company building the apartment community.

The apartments feature improved amenities such as washer and dryer hookups, dishwashers, Wi-fi access, outlets with USB ports and upgraded recreation and community spaces. Inside and out, they have the look and feel of a modern apartment community, which is precisely the point, Snipes said.

“It’s no longer public housing,” Snipes said. “When you think of, like, King’s Landing apartments (near Godwin Boulevard), that is exactly the type of property this is. It’s not public housing anymore.”