New drone to aid finding those who ‘wander away’ 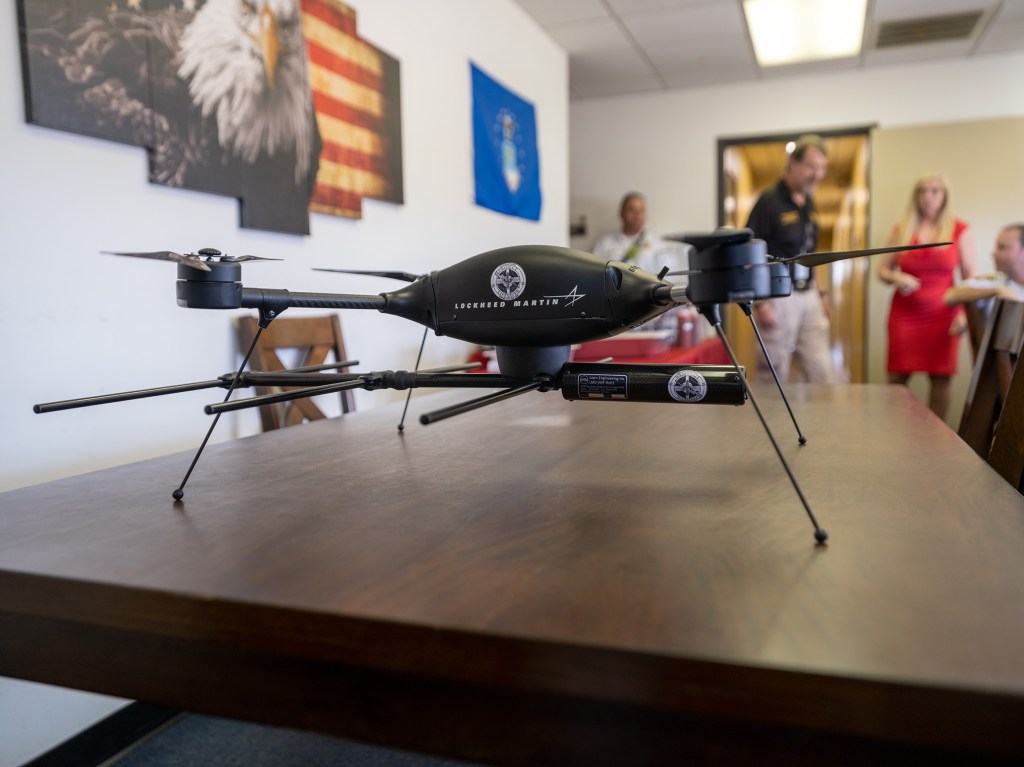 Suffolk Department of Fire and Rescue now has a second aerial drone to help with its emergency operations following a five-year, $50,000 fundraising effort from Suffolk Project Lifesaver board members, who purchased the new $10,000 piece of public safety equipment and turned it over to the fire department Tuesday afternoon during a 45-minute dedication ceremony and flying demonstration held at Suffolk Executive Airport.

Thanks to Suffolk Project Lifesaver Search and Rescue, the Suffolk Department of Fire and Rescue now has a second aerial drone to help with its emergency operations.

Following a five-year, $50,000 fundraising effort, SPL board members purchased the new $10,000 piece of public safety equipment and turned it over to the fire department Tuesday afternoon during a 45-minute dedication ceremony and flying demonstration held at Suffolk Executive Airport.

“The ‘Kenda Scout Drone’ will position the Suffolk police and fire departments to locate missing clients in emergency situations much quicker than traditional avenues,” said Suffolk Fire Chief Michael Barakey, who accepted it on the city’s behalf. “We applaud the fundraising efforts of the Suffolk Project Lifesaver board that have made this all possible; they have provided an invaluable, lifesaving asset to the City of Suffolk.”

“If memory serves me right, it was Mason who first brought the idea of a drone to the board for discussion/approval,” said Susan Blair, SPL chairwoman and dedication organizer. “Because Suffolk has the Great Dismal Swamp and is very rural, in general, it made sense to have the ability to go ‘up and out’ as opposed to ‘going through.’ So, the board decided to start raising money. It was quite a daunting goal, but we did it.”

Founded in 2001, Suffolk Project Lifesaver Search and Rescue is essentially a non-profit, public safety program, offering free professional services to any “at-risk” community member deemed eligible for them. Its goal is to return to their loved ones, family members who may have, without prior warning, accidentally or deliberately, wandered away from home or work and strayed into potentially dangerous places where they don’t belong and could get hurt.

The program now has 61 clients, with two more expected to join the ranks in the next two weeks. Many of them, including minors and adults, have been diagnosed with Alzheimer’s Disease, Autism, some form of related dementia or other behavioral disorder.

To find wanderers that are in the program and reported missing, SPL searchers use a handheld tracking antenna to zero in on a personalized electronic transmitter each client wears, either on their wrist or ankle and looks like a wrist watch, that constantly emits a silent radio frequency signal that goes undetected until searchers activate the antenna and enter the missing person’s unique transmitter tracking code.

If someone goes missing who is not wearing a bracelet, and without the use of a drone, searches are usually conducted by car, sometimes lasting days, possibly using hundreds of searchers, and sometimes the attempted recovery concludes unsuccessfully, as the search subject either wasn’t found or didn’t survive. In addition, there are expenses, such as for food and water for the searchers, and fuel.

With a drone, however, search times can be cut to less than 30 minutes, while using as few as two or three searchers who can hear the transmitter’s signal and use drone cameras to more quickly find the person in real-time.

“The Kenda Scout is equipped with a ‘pay load’ that detects the frequency of the missing person’s bracelet, the same as the handheld tracker,” said Blair.” Once it detects the signal, it then sends back the coordinates. Once those are received, a second, Aerial Scout, that belongs to the fire department, is deployed with a camera to then get a visual on the missing person. Then, the fire department can deploy personnel to the location.

“We could have purchased an additional payload with a camera, but it was too costly and it would have taken more time to bring it back and change out the payload to put the camera on it,” Blair said. “So, the Kenda Scout, and the Aerial Scout that the fire department already has, will work in tandem together. It is really the best of both worlds.”

Whether it’s a ground-based or aerial search, either of them can seem almost futile, if the subject isn’t wearing a tracking bracelet. But with the bracelet, the program’s success rate soars.

“I think it’s been a while since we did a search, but the average time, once on the scene, is 17 minutes to recovery,” said Blair. “If the patient is in a Project Lifesaver program, the results have been 100 percent successful. Fortunately, Suffolk only has a few searches each year, at best.”

Its purchase made possible following a five-year, $50,000 fundraising effort by SPL, the compact, $10,000, Kenda Scout unmanned surveillance aircraft was, weighs five pounds, is 32-inch by 32-inch by 9-inch in size and folds down to 12-inch by 9-inch by 7-inch.

Built by Lockheed Martin Corp., with a maximum cruising speed of 25 miles per hour, it hovers and flies from 10 to 500 feet above the ground, goes out day or night, in moderate rain, and withstands winds up to 25 miles per hour. Due to a problem with charging its battery, however, the department’s similar, smaller Aerial Scout was used for the dedication’s demonstration.

Suffolk’s fire department has six drone operators, all of whom have had at least three days of training and testing to acquire all drone-related requirements mandated by the FAA, Moore said.

In addition to covering the Kenda Scout’s cost and maintenance, SPL also pays for all other expenses associated with running the program, including, $300 to set up new water-resistant transmitter bracelets, with new batteries installed, for each new client; and about $6 for each band to which it’s permanently attached. Receivers, costing between $1,200 and $1,400, also sometimes have to be replaced as they fall out of warranty or wear out.

When the Kenda Scout is not in use by SPL, it will be available to other city departments, such as the police department. SPL’s willingness to absorb program costs comes as a blessing to the city, sparing it from using any taxpayer money on them.

“There was no city money involved, as we get no funding for the program’s equipment from any city, state or federal tax dollars,” said Jennifer Moore, assistant director, media and community relations, City of Suffolk. “It was purchased by fundraising and donation dollars by the SPL board.”

The Kenda Scout was nicknamed after Joseph Patrick Kenda, a retired Colorado Springs Police Department detective lieutenant who helped SPL’s fundraising efforts and was featured on the Investigation Discovery television show, Homicide Hunter, where he recounts stories of cases he has solved. Its last season was in 2019. His personal support for SPL’s fundraising efforts helped in securing the new drone.

“Our primary fundraiser was our Kentucky Derby Party at the First Lady, which we held from 2017 to 2019,” Blair said. “We had silent auctions as well as live auctions. Joe Kenda was instrumental in raising funds during the live auction. We raised almost $50,000 to put towards the drone, or ‘Kenda Scout,’ as we refer to it.”

It’s unknown how many Suffolk residents may be actually eligible to join the SPL program, but its doors are always open to people who need and want it.

“It’s difficult to know how many are at-risk in the City of Suffolk,” said Blair. “We don’t have a capacity on how many we can take in the program, but there is a certain criteria that needs to be met in order to determine whether they are eligible. Most of the time, the family reaches out to us for help.”

Blair said the program’s good fortune reminds her of how important the Project Lighthouse program is to the Suffolk community, and hopes that the community continues supporting it.

“The dedication was a great success and would have never happened if it not for the generosity of the Suffolk Project Lifesaver Search and Rescue board of directors, donors, and Suffolk Fire and Rescue,” Blair said. “This device will be an instrumental part of keeping those citizens that are enrolled in our program safer than before.”