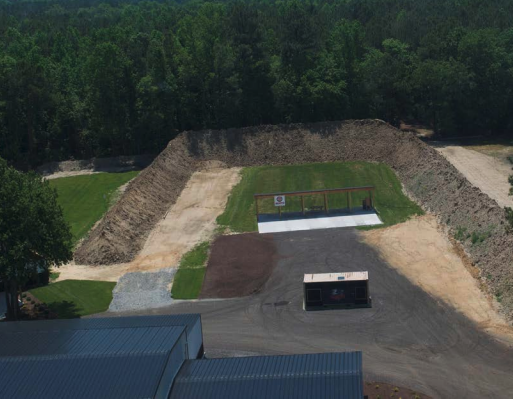 Several shooting ranges and a training school have been proposed for property on Hosier Road near the Suffolk Executive Airport and the Skeetertown area of the city.

The owner of a Hosier Road shooting range and the civic league representing the nearby Skeetertown area of the city will meet in early July to discuss concerns about adding outdoor shooting ranges and a school to provide tactical and non-tactical instruction, education and safety training on the 284-acre property.

The applicant, Jack Claude of Hoggard-Eure Associates on behalf of property owners Kevin Glenn and Hosier Road Associates II LLC and Hosier Road Associates III LLC, has proposed several shooting ranges — a 200 and 800-yard rifle range, and a 50-yard pistol range on four acres of the property at 1255 Hosier Road. They’re designed to accommodate 12 members at one time. It also proposes retail sales of firearms and ammunition to serve as an accessory use to the shooting ranges. The ranges are already there and would require no new construction.

A school has also been proposed on 10 acres of the gated property at 1444 Hosier Road to provide tactical and non-tactical training for federal, state, local and municipal personnel and the general public, and guests will have to pay dues to become members. The facilities for the school are already existing features of the property, and would not require any construction, and on that side, there is also a sporting clay area, several buildings and parking.

The meeting between the civic league and the shooting range owner will take place July 12, ahead of the Planning Commission’s next meeting July 19 to consider a pair of conditional use permits for the two uses.

Among the concerns outlined by Skeeter during the commission’s June 21 public hearing were those about stray bullets potentially escaping the property and landing in a neighboring yard and whether it would be a “Blackwater-type” facility, referring to the United States Training Center (formerly the Blackwater Training Center) located on about 7,000 acres in northeastern North Carolina near the Great Dismal Swamp that offers tactics and weapons training to military, government and law enforcement.

“It would seem most of the boxes have been checked, according to the presentation, about who needed to hear from this, except from the people who live in the community,” Skeeter said. “I’m here right now to tell you that, on behalf of the civic league, we are in opposition of this because this particular community, even though this proposed facility is on the end of Skeetertown Civic League’s boundaries, it encompasses a community right down … Hosier Road, where it starts to get low density because that’s the way it’s zoned, but (there are) a lot of houses that have been there for a long time.”

William Hunter, who owns land adjacent to the proposed facility, said he had concerns about the shooting and the noise. He said he uses his property to hunt on and said he wanted its hours limited during hunting season.

Bear Swamp Outdoors’ Human Performance Center, the name of the facility according to a narrative submitted as part of the permit request by Jack Claude of Hoggard-Eure Associates, currently has outdoor shooting ranges on the east and west sides of Hosier Road, which is made up of three properties — one at 1255 Hosier Road on the west side of the road, and the other two on the east side of the road at 1444 Hosier Road.

Claude said in response to opposition that the type of people who would use the facility would not be shooting over the protective berms, and that in more than 20 years, there have been no complaints about the site.

“These are people here to train,” Claude said. “They’re federal, they’re state, they’re local, law enforcement for the most part.” He said others who would be there would include people like himself who want to get better at shooting.

The site would have range safety officers who have to be certified for the role.

He and Glenn said they have been operating there for 22 years and noted that Suffolk Police officers have been out to the facility. Glenn said about 25 to 30 officers had been there to learn how to deal with large crowds of people who have guns. He said it would also enter into a memorandum of understanding to allow police, fire and other first responders to use the facility.

The properties received approval for a zoning permit from the Virginia Department of Wildlife Resources in November for a hunting, fishing and game preserve recreational club, which does not require a conditional use permit. However, the property received a notice of violation from the city in April for conducting an outdoor shooting range without a conditional use permit.

The application narrative for the project states that guests would have to check-in and park at 1444 Hosier Road, and for those wanting to use the other shooting ranges across the road, they would be taken by bus and escorted by a shooting range staff member. All firearms would also be firmly secured in one of the buildings when not in use. Proposed hours for the shooting ranges would be from dawn until dusk.

Because of the site’s proximity to Suffolk Executive Airport, an airport representative reviewed the application and did not object to the shooting ranges. It also cannot exceed a noise level of 60 decibels between 7 a.m. and 6 p.m., and 55 decibels from 6 p.m. to 10 p.m. A noise level exhibit submitted with the application showed that sound should not exceed 53.8 decibels at any sample points.

All of the outdoor shooting ranges will have 20-foot high and 11-foot wide berms. The staff report states that “these safety measures in conjunction with the recommended conditions of approval should prevent the shooting ranges from becoming a detriment or endangerment to the public health, safety, morals, comfort or general welfare.”

Planning staff recommended approval for the shooting ranges and private school, with conditions.

Hoggard-Eure Associates President Raeford Eure provided a history of the property, noting it used to be owned by the late Congressman Owen Pickett, who used it for political get-togethers and for shooting pheasants. He said Suffolk would benefit from having such a facility.

“I think there’s a misconception here,” Eure said. “This has been a group of people who enjoy the camaraderie of hunting, deer hunting, which is bountiful out there, on the boundary, on the edge of the (Great) Dismal Swamp, bear hunting, and so on and so forth. This is not as was alluded to. … a Blackwater training facility for the military, or whatever.”