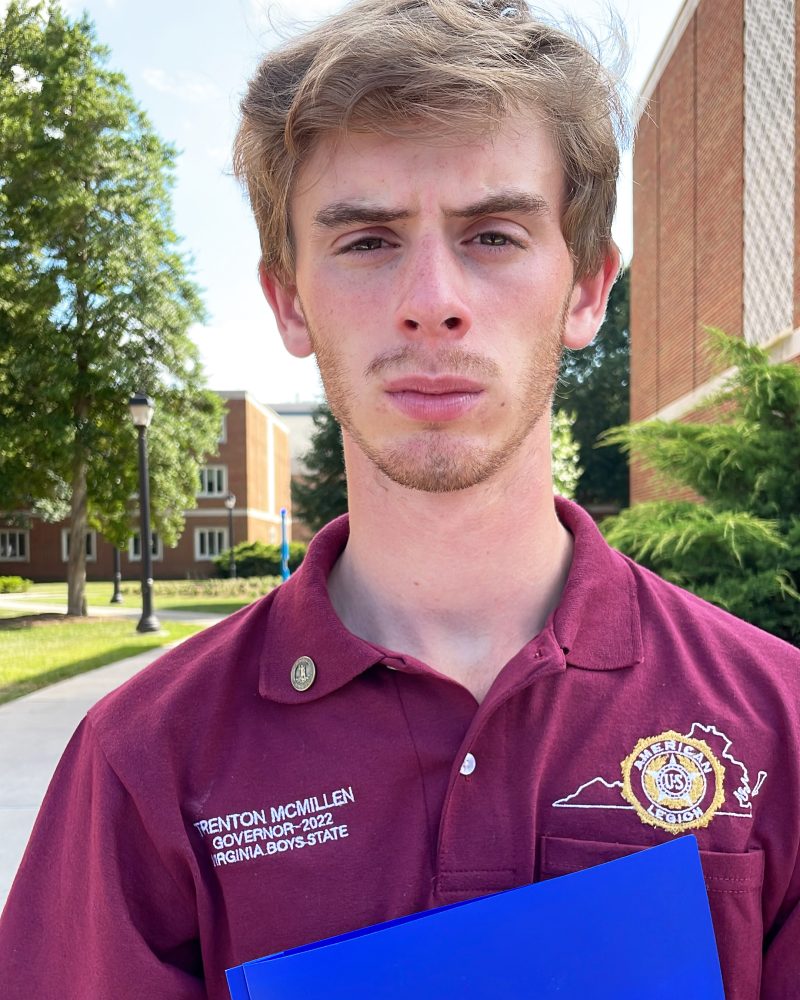 Trenton James McMillen’s hands-on experience with a political campaign instilled in him a passion for government as the rising senior at Nansemond River High School got his first taste of the political arena by working on Suffolk Treasurer Ronald Williams’ 2021 re-election campaign. This experience piqued his interest in the governmental process, which prompted him to apply to Boys State, held at Radford University. (Submitted photo)

For some, one formative experience can lead to pathways previously unconsidered. Trenton James McMillen’s hands-on experience with a political campaign instilled in him a passion for government.

The rising senior at Nansemond River High School got his first taste of the political arena by working on Suffolk Treasurer Ronald Williams’ 2021 re-election campaign. This experience piqued his interest in the governmental process, which prompted him to apply to Boys State, held at Radford University. After being accepted to the conference, McMillen used his public speaking and persuasion skills to convince his fellow delegates of his leadership abilities, and was elected the first governor from the district representing the American Legion’s 88th post.

In 1939, the American Legion of Virginia founded the program to counter the looming specter of fascism, in the form of both European governments such as Nazi Germany, as well as dissident sympathizers at home, according to the vaboysstate.org website. The organization’s mission then and now is to cultivate an engaged citizenry, cognizant of their rights, responsibilities, and core democratic values.

The program is open to motivated male students of junior status. Candidates are first nominated by their school counselor, then interviewed by Legionnaires, who ultimately decide whether to accept their application. After acceptance into Boys State, the organization’s website states that delegates arrive at Radford with the task of forming a government. Elections are held for positions ranging from county sheriff, mayor and city council, all the way up to governor. The extremely fast-paced-process led McMillen to be elected governor on the morning of Thursday, June 23, and to fill his cabinet by the following Saturday.

The nature of Boys State necessitates pragmatism, and constructive, respectful discourse. While delegates are sorted into either the Nationalist or Federalist Party, they did not arrive with any ideological bias, the Boys State website explains.

According to McMillen, aside from the party’s conventions where platforms were determined, a spirit of bipartisanship prevailed throughout the week. In his campaign speech for governor made before delegates, he stated, “While Americans have their differences, I offer that we have more in common than what we might think. We can agree that civil rights are human rights. That health care and mental health care need overhaul. That education should equip students for careers and opportunities. We may not always agree on the ‘how,’ but we agree on outcomes.”

Interspersed between policy-making sessions are speeches from political luminaries. This year’s attendees included former governor and U.S. Sen. George Allen, current Lt. Gov. Winsome Sears, and sitting U.S. Sen. Angus King of Maine, a Boys State alumnus. Each speech was followed by a question and answer session, providing delegates with invaluable knowledge to take back to their practical sessions.

Complementary to the Boys State policymaking component is an emphasis on character, discipline and civic pride. Daily room inspections take place, and delegates are given a flag book, outlining the conference’s code of conduct, according to the group’s website. Proper attention and care of the flag is expected, and the Boys State chorus sings patriotic songs such as “America the Beautiful,” “God Bless America,” and the organization’s anthem, the “Virginia Boys State Song.”

McMillen unequivocally recommends Boys State to any eligible student with an interest in government. He plans on staying in contact with several of his fellow delegates, and enjoyed the networking opportunities the conference afforded.

When asked to provide advice for prospective participants, he stressed the importance of collaboration.

“The most important part of the process is your team,” McMillen said. “They are your foundation. Without them, getting things done is almost impossible.”

As for his future plans, McMillen aspires to play collegiate golf in Virginia, with the University of Virginia, James Madison University, and the College of William and Mary, as his top choices. He plans on studying a pre-law track emphasizing economics and political science, with the goal of attending UVA’s prestigious law school upon graduation.