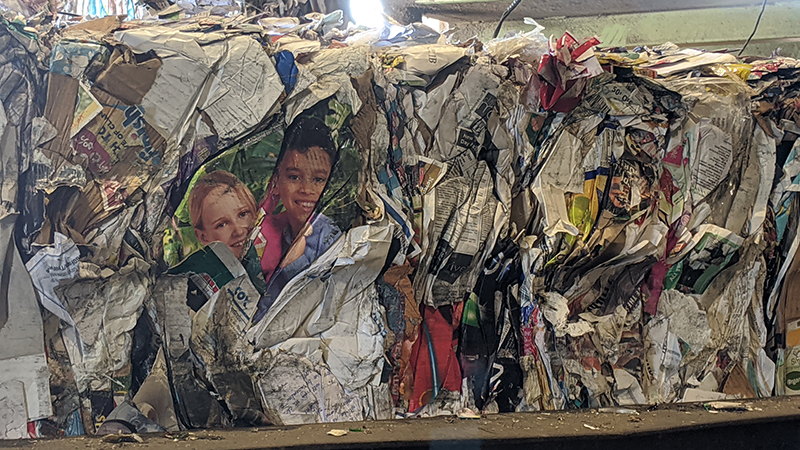 In October 2019, both Chesapeake and Suffolk were at the end of their respective recycling contracts with Tidewater Fibre Corporation Recycling and had to make decisions on whether to renew or go their separate ways.

Both cities’ leadership opted to move forward with new five-year contracts with the Chesapeake-based TFC, but two years and a pandemic later, the city of Chesapeake ended its contract with the company early in a less-than-amicable split. Chesapeake officials cited recyclables being left on curbs for more than a month as the company has faced driver shortages and increased costs to maintain its equipment.

Other than the odd missed day, Suffolk City Manager Al Moor and TFC president and owner Michael Benedetto said there have been no such issues in the city, and the company’s recycling efforts continue unabated, with the city’s contract with TFC not set to expire until June 30, 2025, with an option to renew it for an additional five years. TFC picks up recyclables every other week on residents’ designated trash pickup day.

“What we’ve seen, there’s been some delay, maybe a day on some of the recyclables,” Moor said. “And you’ve read what they’ve said in the paper in Chesapeake. It’s drivers, it’s equipment, but it’s happened at my house, maybe three times.”

Last July, the city and TFC, in a news release, acknowledged some delays in curbside recycling pickups due to company staffing issues.

Benedetto confirmed this in an interview Thursday.

He said as its contract with Chesapeake wound down, the company had challenges in collecting its recycling, something he noted is not an issue in Suffolk.

“We don’t have that same challenge in Suffolk anymore,” Benedetto said. “We’ve got trucks that we ordered this year that will be arriving in the next month or two. We’ve got folks that were working in Chesapeake on that contract, and now they’ll be able to go into other cities, including Suffolk.”

In October 2019, Suffolk was faced with its choice when its contract with the company expired. The city, under then-City Manager Patrick Roberts, put out a request for proposals on recycling services to see if another company could provide recycling at a lower cost to targeted areas of the city, but he said at the time that it did not work out.

Suffolk went through three, short-term extensions with TFC between the fall 2019 and June 2020 before agreeing to the five-year contract that took effect in July 2020, with the company’s monthly fee it collects increasing from $3.10 to $4.95.

At that time, the city had also increased its refuse fee for the more than 30,000 households that receive weekly trash service from $21.30 per month to $25.25. That fee has not changed since, and residents are billed twice a year. The city had a recycling participation rate of 65% in fiscal 2021, according to information provided in the city’s fiscal 2023 budget, with projections of near 70% in the current fiscal year.

“I haven’t heard a large outcry,” Moor said, “Public Works has received some calls, but generally it’s because of the delay. We haven’t gone out there, that I’m aware of, and picked up the cans.”

That’s something Chesapeake’s Public Works crews have done to clear the backlog of recycling that was not picked up, and there, the city has now opened seven recycling drop-off sites.

When TFC raised its monthly fee in 2020, it cited lower demand for recyclable materials, particularly in China, where the country blocked almost everything that wasn’t what Benedetto termed “100% pure.”

He said nothing has changed about the demand for paper, but now paper mills are opening in the United States, including one recently in Ashland, in Virginia, and another paper mill is coming to Chesapeake. Total Fiber Recovery announced July 5 that it would invest $80 million for a new mixed-paper recycled pulp production facility that would open by the last three months of 2023.

Benedetto said there has been misinformation put forth that there isn’t a market for certain materials.

While he didn’t specifically mention Chesapeake in those comments, on a frequently asked question page on the city of Chesapeake’s website, it states “there is not currently a market for recycled glass … With our previous recycling contract, glass placed in the blue bin was sent to the landfill, crushed and used as cover.”

“The China situation is long-gone,” Benedetto said. “For somebody to say there isn’t a market for material, that never was true. And we do hear that from one city in particular, that there isn’t a market for material to try and help them justify what they were doing. We’ve heard things like irresponsible misinformation (and) incomplete information about how much stuff is actually being recycled, because over 95% of the correct materials that get placed in the bin are recycled.”

Moor said another challenge is just helping residents understand what can be recycled, and what cannot.

“We try and simplify it to paper, bottles and cans,” Benedetto said.

There are some things within those categories TFC does not recycle. Paper items contaminated with food, including pizza boxes, are one. There are also exceptions for some bottles and plastics, and it also doesn’t take pressurized aerosol cans because it creates safety issues, Benedetto said, and it doesn’t accept paint cans because they can have a residue liner in them.

“When it comes to bottles, what we don’t want is anything that you can’t pour down a drain,” Benedetto said, “such as automotive-type products and motor oil. But shampoo, laundry detergent, food and beverage bottles are all good.”

He also wants people to understand the benefit of recycling versus trash collection.

“That’s what I don’t think that folks hear and recognize enough,” Benedetto said, “is that the cost to recycle is typically one-quarter of the cost to collect trash.”f

Those totals represent about eight times as much trash that is collected as compared to recyclables. TFC collected 6,085 tons of recycling in Suffolk in fiscal 2021, with projections that it would collect 6,300 tons in fiscal 2022 and 6,600 tons in the current fiscal year.

He wants to see more incentives for people to be environmentally responsible, and suggested people pay for trash based on the volume they produce. He said it was “short-sighted” of Chesapeake to cancel its contract with TFC, but said with resources shifted to Suffolk and other cities, and new equipment on the way, the family-run business can continue to thrive and meet the needs of the cities with which it has contracts.

“We see great things ahead for TFC because of this environmental movement,” Benedetto said.