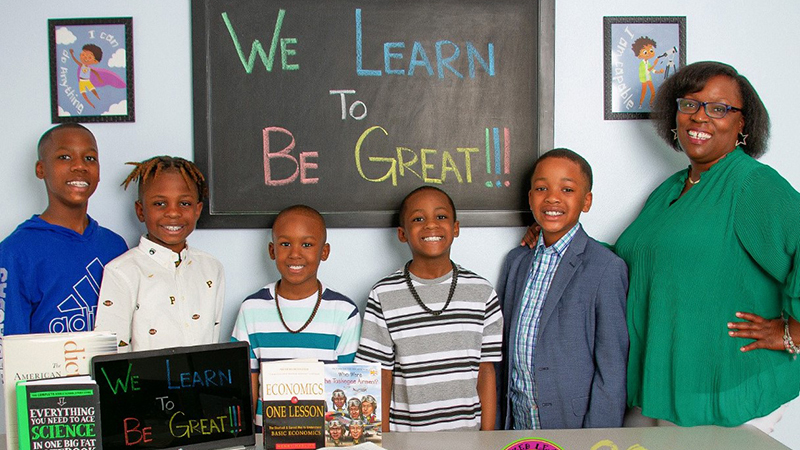 Children of the 1970s have common memories of their childhood summer days. Running through sprinklers to keep cool. Paying 50 cents for a snow cone from the neighborhood ice cream man.

Children could also expect to experience similar activities to commemorate the end of each school term. Elementary and middle school students were given spelling tests to assess the retention of all the spelling words you learned throughout that grade level. Do you remember the word that you misspelled in the last spelling contest that you participated in as a child?

Spelling tests can be both exciting and nail-biting occasions. Perhaps that is why teachers still see the value of these assignments in modern classrooms. Special teachers enjoy challenging their students with contests for some healthy competition.

Lavone Whitener Green of Suffolk is such a teacher who believes in good fun and healthy learning environments. Mrs. Green is the lead administrator and teacher of the O.L.A. homeschooling co-op. She hosted her first public spelling bee on June 18 at HP Music and Arts store in Chesapeake Square Mall.

The store provided an atmosphere for inspiration as the participants were surrounded by sale products bearing affirmations and apparel with colorful combinations of lively Afrocentric patterns. Mrs. Green opened the program with a spoken word selection by artist Terrell Mercer. J’Niah Boggs and Alexia Carroll performed a praise dance to the popular Christian music hit “Jireh” by Maverick City Music.

The youth began the contest speaking nervously into the microphone to spell their assigned words. As the competition continued, they grew more and more confident. Each of them cheered on the other and gave high fives as they returned to their seats following each spelling achievement.

The spelling bee participants include Daniel A. Green, 13; Darrick D. Eure Jr., 8; Jeremiah E. Miller, 8; Caiden A. Wise, 8, and Caleel J. Wise, 7. The Wise brothers are the youngest of the group and both are in their first year of reading. Each of the contestants wore matching black graphic T-shirts bearing their names.

Mrs. Green intended this contest to be an encouragement to her students and therefore elected not to buzz the students if they misspelled a word; rather the contest announcers were asked to keep track of the correctly spelled words as the students continued to accept their challenges throughout the afternoon’s program.

Keshia Morris -Eley and QuaWanna Bannarbie were selected to be the program announcers. For nearly two hours with only one break for intermission, the contestants courageously spelled words such as “bicuspid” and “dossier.” The announcers had just as difficult a role as the children. The students requested sentences demonstrating the use of the word and definitions for assistance in accurately responding to the announcers.

Parents and friends of the co-op gathered in support. The store was arranged in a recital setting with fruit and beverages provided for the contestants to refresh themselves.

At the conclusion of the contest, each participant had attempted 40 words in a spell-off fashion. Two out of five contestants spelled 100% of their words correctly.

Not too far from Hampton Roads, a historical spell-off took place recently in Oxon Hill, Maryland.

The winner of the 2022 Scripps National Spelling Bee was determined in its first ever spell-off on June 1, when Harini Logan of San Antonio, Texas, correctly spelled seven more words than her opponent in a final spelling marathon for the win.

Now that the O.L.A. contestants have experienced the affirming atmosphere of their first spelling bee, they are now equipped to perhaps meet someone on that national stage in the future. Mrs. Green says that she started the homeschool because she believes that “every child has the ability to learn and to flourish.” Each of her students were successfully promoted to their next grade, respectively, and were honored for their achievements with trophies, honoree medals and bags of goodies.

Letter – A plea to preserve ‘community’ by denying rezoning request

Letter – Four reasons to turn down rezoning for Port 460 project