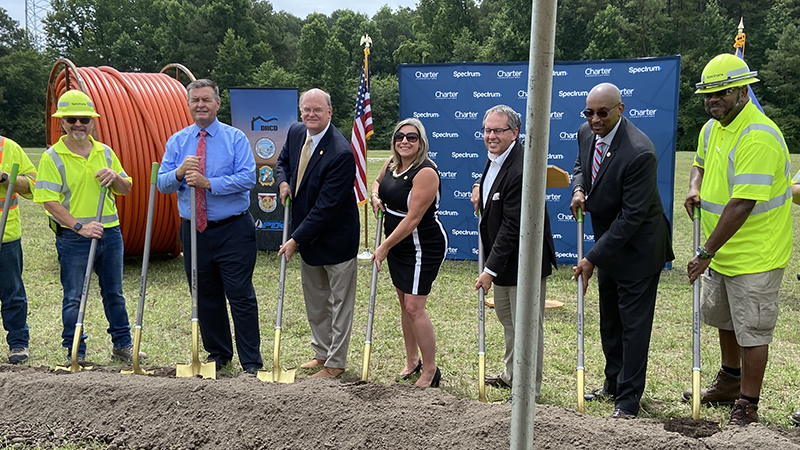 Broadband stakeholders gathered today to celebrate the groundbreaking of high speed internet services being delivered to all households in the City of Suffolk, Isle of Wight County, and Southampton County. (submitted photo)

Area officials joined with those from Charter Communications Thursday to break ground on a high-speed internet project to more than 12,000 homes in the city and two neighboring counties.

The $35 million project is set to bring broadband to rural areas of the Suffolk, and Isle of Wight and Southampton counties is a key part of the Hampton Roads Regional Broadband Initiative. It is expected to take advantage of the region’s regional fiber ring being built by the Southside Network Authority.

The three localities and the planning district commission applied for, and received, a $21.1 million Virginia Telecommunications Initiative grant from the state Department of Housing and Community Development. Local money and funds from Charter, which operates under the Spectrum brand in Suffolk, will account for the additional $14 million project cost.

“Having worked with community leaders over the last several years to work towards this reality, I am incredibly excited for the positive impact this will have for the residents and business owners in each locality,” Brewer noted, “Ensuring our farmers, businesses, students, and families have access to broadband is vital as power is to our homes.”

Also speaking Thursday were officials from Charter Communications, local and state elected officials and community members, who gathered in Whaleyville to kick off the beginning of broadband expansion.