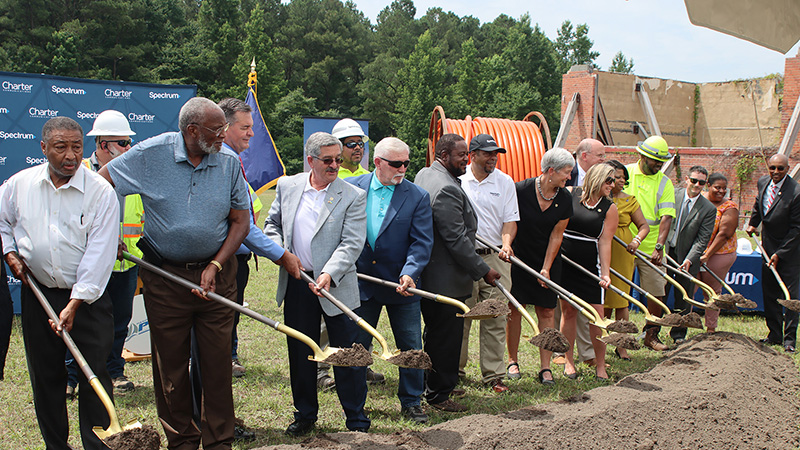 Broadband stakeholders gathered Thursday to celebrate the groundbreaking of high speed internet services being delivered to all households in the City of Suffolk, Isle of Wight County, and Southampton County.

High speed internet is on the way for many rural Tidewater residents, businesses and community organizations.

City of Suffolk officials were joined by those from Isle of Wight and Southampton counties and a host of other dignitaries from the region for the official groundbreaking on the new high speed internet project Thursday, July 14 at Southwestern Elementary School.

Assisted by a grant from the Virginia’s Department of Housing and Community Development, along with investments by private telecommunications, officials said this provides large step forward in ensuring expansive broadband coverage.

The $35 million initiative will bring high speed broadband service to about 12,000 homes, churches and businesses in the city and counties.

Prior to this project, rural internet service was limited.

“Our city was challenged in expanding this service to our rural community, due to its vast landmass”, said Suffolk Mayor Michael Duman.

Del. Emily Brewer of the 64th district, who serves as chair of the House communications, technology, and innovation committee, welcomed the project with a hint of irony.

“I don’t have broadband at my house yet,” she told those gathered, despite the role she plays in dealing with this topic in the state legislature.

Throughout the ceremony, the politicians and business leaders concurred that the COVID-19 pandemic and its resulting disruptions were a catalyst in finalizing the project. Namely, the school closures and teleworking which necessitated access to high quality internet.

Officials at the ceremony touted the economic and educational benefits that access to broadband confers.

Collins stressed Charter’s commitment to affordability and digital literacy, through their “digital education grant.” This program works with non-profit organizations to educate users on the benefits and best uses of broadband.

Another economic benefit of this project helps a highly consequential industry-farming.

According to Chris Cornwell, member of the Southampton County Board of Supervisors, 23% of the land covered by the project is farmland. Thus, farmers will benefit from “improved GPS technology and record keeping, as well as data sharing capability from seed and fertilizer dealers,” he said.

Although the project remains in its infancy, funding has been secured and public support is strong, officials noted. Once completed, the expansion of broadband to previously underserved communities will help rural residents’ access resources essential to their economic, educational, and personal vitality.

The three localities and the planning district commission applied for, and received, a $21.1 million Virginia Telecommunications Initiative grant from the state Department of Housing and Community Development. Local money and funds from Charter, which operates under the Spectrum brand in Suffolk, will account for the additional $14 million project cost.

The project is a key part of the Hampton Roads Regional Broadband Initiative. It is expected to take advantage of the region’s regional fiber ring being built by the Southside Network Authority.

“Having worked with community leaders over the last several years to work towards this reality, I am incredibly excited for the positive impact this will have for the residents and business owners in each locality,” Del. Brewer noted, “Ensuring our farmers, businesses, students, and families have access to broadband is vital as power is to our homes.”