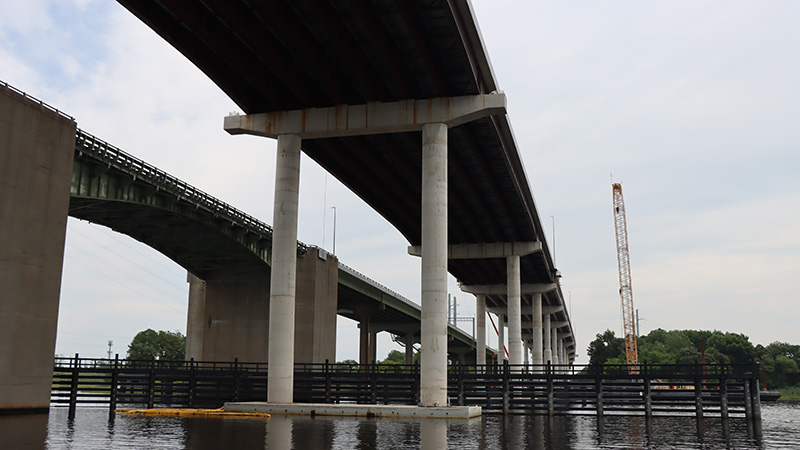 Suffolk motorists using westbound Interstate 64 in the Hampton Roads region will no longer to wait for bridge lifts that allow traffic to pass on the waterway below.

The newly constructed, 1.2 mile, fixed-span bridge with a 100-foot clearance over the Elizabeth River will initially carry two lanes of I-64 west traffic toward Virginia Beach. Interstate 64 east traffic (toward Suffolk) will remain on the existing High Rise Bridge.

Contractor crews with Granite-Parsons-Corman, the joint-venture for the I-64 Southside Widening and High Rise Bridge Expansion Project, will facilitate this project milestone using a traffic shift overnight starting as early as Friday, July 15. Single-lane closures will be in place on I-64 west from Shell Road to the existing High Rise Bridge, beginning as early as 8 p.m. to install barrier walls separating east- and westbound traffic from Shell Road to the new bridge approach. This traffic shift includes weather-dependent work, including paving and pavement marker installation, that cannot be completed in wet or damp conditions. Should these conditions be present on or in advance of Friday night’s shift, the bridge opening will be postponed and a new opening date will be announced after re-evaluating the project schedule.

Once the bridge is in use, motorists can expect continued construction activities on the shoulders, including nighttime, single-lane closures, to complete additional bridge work and reconfiguration of the existing High Rise Bridge.

With a taller vertical clearance than the existing High Rise Bridge, the new, fixed-span bridge eliminates the need for bridge lifts for westbound traffic. Following the initial opening of the new High Rise Bridge, the remaining construction will include widening the corridor to three lanes by adding an Express Lane in each direction from 0.6 mile east of the I-264 interchange at Bowers Hill to 0.9 mile east of the I-464 interchange.

Replacement and realignment of the Great Bridge Boulevard Bridge over I-64;

Reconfiguration of the existing High Rise Bridge to carry one-directional traffic (eastbound towards Suffolk); and

Completion of an asphalt overlay for existing interstate lanes.

Currently, crews have completed the replacement of the Great Bridge Boulevard Bridge, which opened to traffic in November 2021, and will continue to work on bridge widenings over Military Highway, Yadkin Road and Shell Road.

Most major elements of the project will be open to traffic by early 2023. This project is also designed to accommodate a future project that will replace the existing High Rise Bridge and expand the corridor to a total of eight lanes. Funding and timing for this project have not yet been identified.

VDOT reminds motorists to slow down in the work zone and be alert to changing traffic patterns and crews working alongside the roadway.