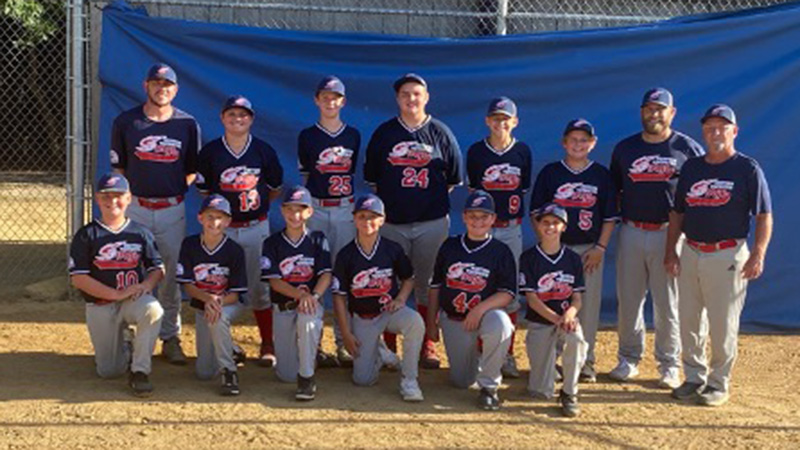 Western Tidewater Surge 11U 2022 All-Stars are, back row, from left: Coach Corey Holmes, No. 13 Lucas Waycaster, No. 25 Jackson Ryder Holmes, No. 24 Collin Credle, No. 9 Quincy Carr, No. 5 Ethan Schompert, Coach Paul Carr and Coach Orel Schleeper. Front row, from left: No. 10 Aayden Gregory, No. 77 Lucas Nystrom, No. 2 Carter Rasberry, No. 3 Mason Schleeper, No. 44 Garrett Schumaker and No. 1 Levi Riley.

For coach Orel Schleeper, advancing to the Pony League World Series represents the culmination of years of hard work. The Suffolk based team of youth 11 years old and under, qualified following a third place finish last weekend at the east zone regional in High Point, North Carolina.

Coaching has been a passion of Schleeper’s for more than a decade. He said that watching the transformation of this particular group of young men is especially rewarding.

“I’ve coached some of them since the age of four,” Schleeper stated. “I’m thrilled that they have this opportunity.”

Pony, which stands for “protect our nation’s youth,” offers both baseball and softball programs for individuals ages 8-18. Each age division holds its own regional and World Series championship, according to the organization’s “about” page.

Pony League baseball differs from Little League in that the former has slightly larger field dimensions. According to Schleeper, the pitcher’s mound is 50 feet from home plate, and the base paths 70 feet apart, as opposed to 46 feet and 60 feet in Little League. Pony League also uses Major League Baseball rules, where players may attempt to steal a base on any pitch, and can run to first base if the catcher drops the third strike.

The tournament pits eight teams in a double elimination format. Each team is guaranteed three, seven-inning games, by virtue of a winner’s and loser’s bracket. The teams come from across the U.S., along with two international teams representing Mexico and Colombia competing, according to the pony league’s website.

Following last weekend’s tournament, the team has a quick turnaround to the World Series. They are scheduled to report at the tournament site in Chesterfield on Thursday, July, 19. The team’s first game is scheduled for 8 p.m., Friday, July 22. against Eagle Pass, Texas. Interested observers can track the team’s progress on www.bronco11worldseries.org.