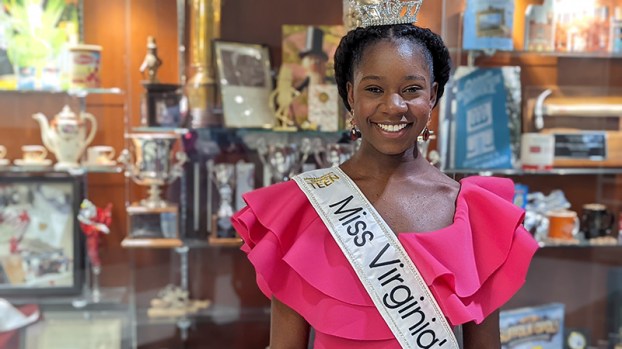 Ayana Johnson, a rising junior at Nansemond River High School, recently won the Miss Virginia Outstanding Teen pageant and will represent the state in the national competition this August in Dallas, Texas. She is using her platform to advocate for sickle cell disease awareness. 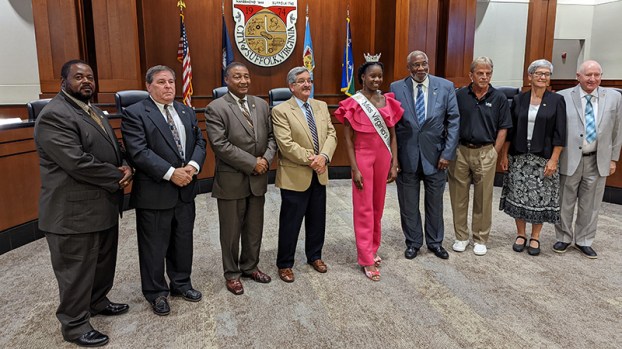 Ayana Johnson is on a mission.

But while she was excited to win, she’s eager to use the platform to raise awareness about sickle cell disease, something she lives with, but she doesn’t allow it to define her. It’s why she waited through Suffolk City Council’s July 6 meeting to address members, all of them effusive in their praise of her and vowing to help her in any way possible.

“It was super exciting to actually get honored to win the title of Miss Virginia’s Outstanding Teen,” Ayana said, “and I’m super passionate about my social impact initiative. That’s what it’s all about for me. That’s why I started competing in the Miss America organization, so having that passion, that drive to just further my social impact initiative and having the platform and using it as a microphone is what I’ll continue to do when I represent the state.”

That initiative is called Ayana’s READ Initiative, an acronym that stands for the Readiness to Empower, Advocate and Diminish Hopelessness and Chronic Diseases. She chose this initiative because she was born with sickle cell disease, an inherited blood disorder which affects more than 100,000 people in the United States each year.

She will take her initiative and continue sharing it when she competes Aug. 8-10 in the 2023 Miss America’s Outstanding Teen national competition in Dallas, Texas.

The Miss Outstanding Teen program is for girls ages 13 to 18, and they must win a local pageant to qualify. In Johnson’s case, she had already won Miss Piedmont Region Outstanding Teen in 2020. Before that she was named National American Miss Suffolk Pre-Teen for 2018 and 2019.

As the 2021-2023 national teen ambassador for the Sickle Cell Disease Association of America, Johnson shares her story and speaks to other students about living with the disease.

“I always tell people that I live my life normally, I live my life like everyone else until the day that I get sick, and then I take care of it from there,” Ayana said. “My parents have always been the same way, so they don’t treat me any differently, or like a kid with a chronic illness. It’s more, they treat me as Ayana, and they take care of me when I’m sick.”

On top of that, she’s an accomplished dancer, having been previously accepted into summer intensives with the Dance Theatre of Harlem and the Joffrey Ballet School, and she’s a classically-trained violinist. She takes part in several dance styles and attends the Governor’s School for the Arts, where she studies ballet, jazz, hip-hop and more.

She has also completed hundreds of hours of community service and was featured last year as one of the Suffolk News-Herald’s 20 Under 21: Young People Who are Changing the World, and she is an ambassador for Children’s Hospital of the Kings Daughters, Suffolk Sickle Cell Foundation Inc., Children’s Miracle Network Hospitals and a state ambassador for National Marrow Donor Program’s “Be the Match” Registry. She also is an American Red Cross blood donor ambassador.

She has even started her own non-profit and sells apparel she makes, and she has partnered with the Centers for Disease Control and Prevention to share her story, which will be released in September. She also received a proclamation from Mayor Mike Duman acknowledging September as Sickle Cell Awareness Month.

That’s when, she said, she believed she was having an impact in sharing her story and message.

“Sometimes I sit back and realize, ‘Wow, I’ve accomplished a lot at such a young age,’” Ayana said. “Definitely when I received my proclamation from the mayor, I started to realize, ‘OK, this is really going somewhere and the work that I’m doing is being noticed.’”

There seems to be little she isn’t able to accomplish, and after finishing as runner-up in last year’s state pageant, she was ready for this year.

“I just experienced a lot of self-growth,” Ayana said. “Going into it this year, I had a different mindset. I guess I was just more at peace with all the work I’ve done, and I knew that that was the groundwork that I had laid. So I just wanted to communicate to the judges my message, my story, why I want the job, because it’s a full-time job to be the title holder if you really want to use that platform.”

Ayana said she currently receives adequate care for her sickle cell disease as a pediatric patient, but she is worried about her future as she transitions out of that and into adult care, noting that about 500 people in Hampton Roads have the disease. Because of that, she is advocating for a sickle cell disease treatment center.

She has a simple way of how she does everything, and not letting sickle cell disease define her.

“The answer to how I balance all of that,” Ayana said, “is just living life as a regular person.”