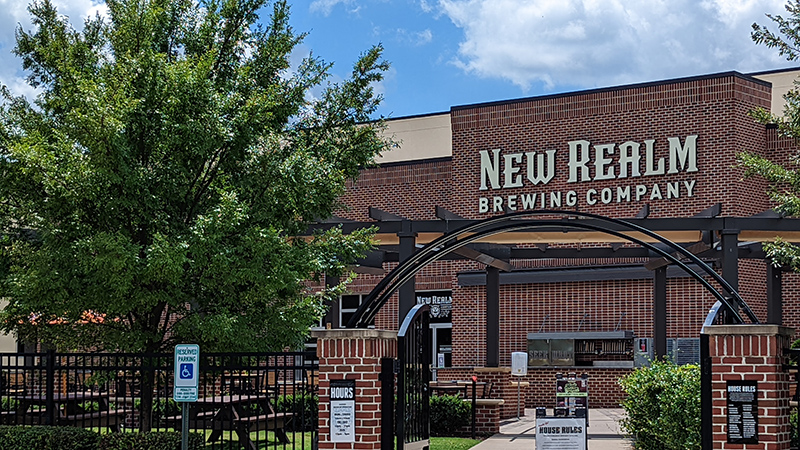 New Realm Brewing, which currently has four locations on the East Coast, including this one just off of General Booth Boulevard in Virginia Beach, plans to add its fifth location in the Harbour View area of Suffolk.

New Realm Brewing will have to wait a little longer on its plans to offer live entertainment at its new brewery in the Harbour View area of North Suffolk.

Following a public hearing Wednesday, City Council members evenly split, 4-4, on approving a conditional use permit to allow live entertainment, which meant the motion to approve it failed.

Another motion to table the permit for 30 days to allow project developers to meet with neighbors of the project concerned about noise and buffers passed, 7-1, with Fawcett voting no.

Duman announced the $9 million project for New Realm’s brewery during his State of the City address in May. The proposal is part of Blue Point at The Riverfront, an 18-acre mixed-use development off Harbour View Boulevard. An $11 million Stay Suites hotel is also planned on the same property, but is not a part of the permit request.

New Realm’s live entertainment would be outdoors except during inclement weather, in which case it would move indoors. The proposed hours for the live music would be from 11 a.m. to 8 p.m. Sunday, 11 a.m. to 9 p.m. Monday through Thursday and 11 a.m. to 10 p.m. Friday and Saturday. The typical hours of operation for New Realm would extend an hour beyond the end of the live entertainment.

David Dallman, a civil engineer with Kimley-Horn and Associates, representing project developer Blue Point Investment Group, said there would also be a minimum 6-foot tall privacy fence and a 30-foot wide screening strip of evergreen trees or evergreen shrubs — the minimum needed is 10 feet wide — to be put along the rear of the property adjacent to the residential area. He also said the outdoor speakers would face inward toward the biergarten and keep sound lower. Music is not proposed on the rooftop dining area.

He said they looked into a request from neighbors to put in a sound wall, but Dallman said after consulting with a sound engineer, they learned a sound wall would have a negligible impact. They also suggested the business install a berm, and Dallman said they are open to the idea, but noted their proposed location along the property line would create a drainage issue for the properties nearest New Realm, so they didn’t include them in their plans.

The outdoor components of the business will be at the front of the property, closest to Harbour View Boulevard and about 300 feet from the nearest residential property.

Dr. Kelly Gilllerlain, who lives off of Sports Club Run near the proposed brewery, said she supported it as a patron of many of them across the state, but would like to see a 4-foot berm on Sports Club Run. She said many in the neighborhood are in favor of the brewery and its plans to offer live music.

“This brewery in particular, the way it’s set up, will be OK,” Gillerlain said.

Mike Hopkins, who lives about a mile away from New Realm’s proposed brewery, said he is pleased that he won’t have to go elsewhere to enjoy places like it.

Others who spoke during a public hearing said they aren’t necessarily against the brewery and the live entertainment it plans, but they want more time to work through noise and buffering issues.

Andy Sweet, president of the Harbour View Homeowners Association, said its board of directors had not been consulted about the project, though in an email Dallman had said there had been “direct communication” between the HOA and the property owner.

Sweet said he met with residents on Gleneagles Way and Sports Club Run, who he noted will be very much affected by New Realm’s plans.

“As a resident of the community, I like the idea, I’m in favor of it, that’s great,” Sweet said. “But as the president of the Harbour View Homeowners Association, where I have to look out for the interests of 1,670 homes, and in this case, probably 50 or so that are directly in contact, I’m a little bit conflicted.”

Sweet asked that the HOA be allowed time to work with the Miller Group, agent on behalf of Blue Point Investment Group, on finalizing landscaping and fencing around the project “so that we can sort of help to insulate the homes from the proposed brewery and hotel.”

Mary Buller, who lives on Sports Club Run, said that with most of the properties along her street having crawl spaces, the elevation means they’ll be able to see and hear over a 6-foot fence and the screening strip of evergreens until they fully grow. She said she can easily see over her 4-foot backyard fence now. She, too, is asking for more time to work with project officials to hash out issues, and asked for a taller fence.

Bob Christie, who also lives on Sports Club Run, said he physically counted the 160 homes that would be impacted by noise from live entertainment at New Realm.

Sports Club Run resident Jimmie Opilla, while supportive of the project, believes it is being rushed. He said he can hear conversations and car alarms that come from the Hilton Garden Inn hotel near his residence. He questioned whether a buffer will mitigate the noise coming from New Realm’s live entertainment.

Dallman said residents’ comments directly related to the live music have been taken into account and they have been addressed, and added that project officials will continue to work with residents to be good neighbors.

He said he wants to work with the planning department and the residents to get a proper buffer in place. One of the conditions for the permit states that “this buffer must be designed to the satisfaction of the director of planning and community development.”

“Was our interaction with the neighborhood perfect, the way they wanted to see it? Maybe not,” Dallman said, “but we did incorporate their comments into what we are proposing here for a live music conditional use permit.”

Duman, who noted some the discussion went outside of the permit request in talking about the proposed hotel on the same property, said the language allowing the director of planning and community development to have the final say on a buffer is something he’s never seen in a conditional use permit, and noted that having to describe a business who wants to have live entertainment be called a “bar and nightclub” is problematic and said there should be a separate permit for a restaurant to have live entertainment — “it sends the wrong message as to what it really is.”

Interim Director of Planning and Community Development Kevin Wyne said the language for it comes out of its current ordinance related to performance standards, and a lot of discretion is given to the director of planning when it comes to screening properties. He also said in conversations with the city’s zoning administrator, “we’re comfortable allowing for fences up to six feet in height at this stage. I think if we had the ability to approve a fence of greater height in this area, then we would.”

Duman said that it’s possible the matter could go to the Board of Zoning Appeals to ask for a height variance to allow for a larger fence, but it would delay the matter “considerably more than the 30 days.”

Ward stressed to Dallman the need for project developers to work with the community and put forth the motion to table the conditional use permit request for 30 days. Williams seconded the motion.

Fawcett, however, countered with a substitute motion to approve the project, and after that failed, council voted for the 30-day delay. He said project developers have done their due diligence and cannot satisfy everyone, and did not believe the sound would carry as far as some residents believe it will.

Johnson said that while he understood the residents’ concerns, he wanted to see the matter settled during the meeting.

“If we delay this thing, we are doing an injustice to our city, because folks are ready,” Johnson said.

Ward asked what the rush is to approve the permit request, noting the brewery won’t be built and opened in 30 days. Dallman said he doubted that the developers and residents would come to an agreement, but is willing to meet with them.
“We’re not slowing up nobody’s progress,” Ward said. “We didn’t say we wanted nothing. The community just said all they wanted to do is to have a conversation.”