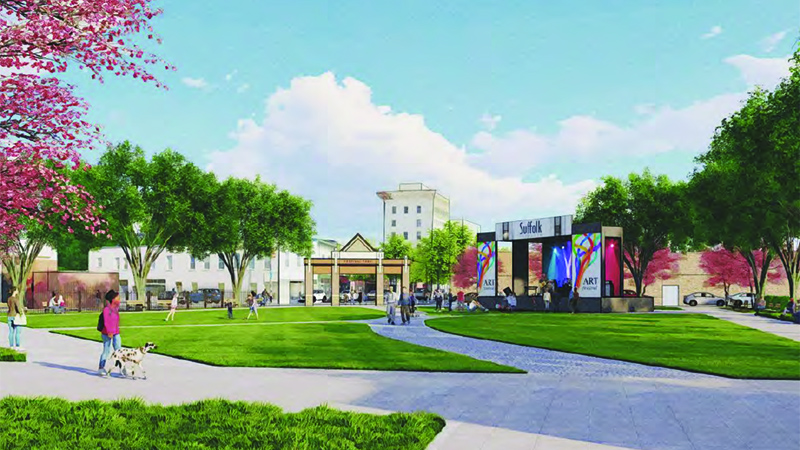 The city plans to build a festival event park in the downtown area off of West Washington and South Saratoga streets on properties that were heavily damaged nearly two years ago as the result of an EF-1 tornado. City Council approved a conditional use permit for it at its Aug. 3 meeting.

The Planning Commission unanimously recommended approval of a conditional use permit Tuesday for a festival event park to be located at the corner of West Washington and South Saratoga streets.

The park is made up of four separate properties on two acres and will be a community park for the city’s downtown historic district.

City officials said the park will bookend a block with the new library, and could draw more than 100,000 additional visitors downtown to support retail, restaurants and other services.

The city set aside $150,000 from the previous fiscal year for the park through its capital improvements program and plan.

Another $550,000 is expected to be spent on the project in the next two years, but council would have to approve that money when it approves subsequent capital projects.

The new park is designed to be open year-round, and in discussions with the city’s Parks and Recreation Department, will be used only between 9 a.m. and 9 p.m. Sunday through Thursday and 9 a.m. to 10 p.m. on Friday and Saturday.

Paved paths through the park will connect the entrance, a food truck/eating area to its northwest corner, temporary restrooms for events and parking for 40 cars to the south, with access points on South Saratoga and Jackson streets. Jones has said previously that there is sufficient parking for the park, pointing to other public parking areas in the downtown area, including the new library, South Saratoga Street, Cherry Street and the Godwin Courts Complex lot. There is also a public parking lot and street parking on North Saratoga Street with more than 70 spaces, and additional parking along adjacent streets.

A series of three grand arches will greet visitors to the park facing the intersection of West Washington Street and South Saratoga Street, and are being designed to complement the materials and forms of the proposed new library just down the street from the park. The center arch, at 34-feet-by-18-feet, will have a 23-square-foot sign that says “Suffolk Festival Park.”

The city projects that the new park site could be the host for its farmer’s market. City officials expect the park could help incubate new events while reducing the need to close streets downtown for weekend events, and they believe demand to increase for retail, restaurants, housing and could potentially attract new office users.

The Historic Landmarks Commission in June approved a certificate of appropriateness that is required for the plans to build the park. Last year, the commission voted to recommend changes to the city’s downtown master plan to allow for the festival park.

Gerry Jones, city director of capital projects, noted the project’s origins after a tornado heavily damaged parts of the downtown area nearly two years ago, which provided the city an opportunity to acquire the two acres of property needed for the new park.

Jones said design work on the project is wrapping up. He said the city would like to get it out to bid later this year and begin construction with the goal of having the first events in the new park by next summer.

City Council is expected to hold a public hearing on the permit request at its Aug. 3 meeting.