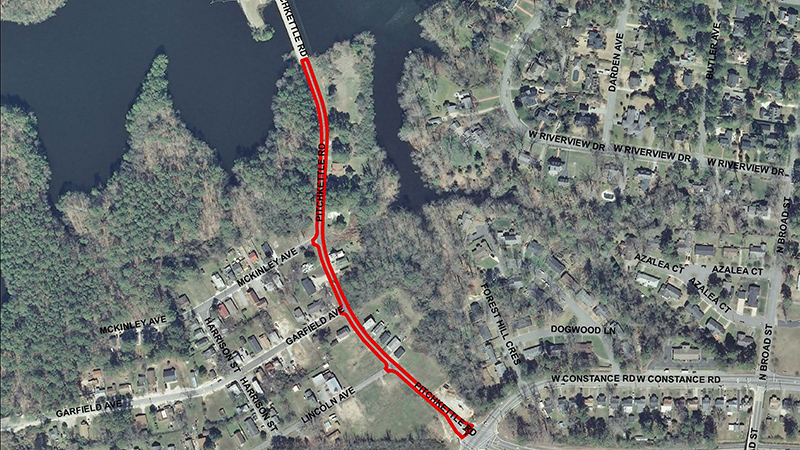 Director of Public Works Robert Lewis said the project will run on about a 2,500 foot stretch of road from the existing bridge over Lake Meade to the existing intersection of Pitchkettle Road, Prentis Street and Constance Road. He said the realignment of the road “will bring it up to modern standards.”

The project is expected to increase capacity at the intersection with Constance Road and Prentis Street and reduce congestion at the railroad crossing.
“It’s a lot of improvements in this short distance,” Lewis said.

No one spoke during a July 20 public hearing, and council voted 7-0, with Councilman LeOtis Williams abstaining due to a conflict of interest.

Williams did not participate in the discussion or the vote on the project, as he stated before the public hearing he “had a personal interest in the property on Pitchkettle Road.” His is one of about 40 properties that will be affected by the project.

The plan calls for eliminating what previous Public Works Director L.J. Hansen, back at a 2020 public meeting on the project, called a “harsh curve.” It also calls for a cut-through road between McKinley and Lincoln avenues.

Preliminary engineering is expected to cost $770,000, with right-of-way acquisitions, relocation assistance and utility relocation nearly $3.8 million and construction costs of about $5.5 million. Design of the project is more than halfway to completion, with the project paid for through the Virginia Department of Transportation’s revenue sharing program using state and local money.

According to the right-of-way data for the project, Williams owns about 8,380-square-feet, or 0.192 acres, of property on the road, and the city has indicated it would seek to acquire about 1,556 square feet of it.

According to the city, the majority of property along the east side of Pitchkettle Road will be full acquisitions, with properties on both sides facing property frontage effects due to temporary and permanent easements.

“This project has been a long time coming,” said Councilman Tim Johnson, “and I think the residents along Pitchkettle Road will be so excited. We’re sorry we have to take a few houses to get there, but it’s going to be a real asset to our city.”

Councilman Donald Goldberg asked about truck traffic coming on or off of the U.S. Route 58 bypass and whether it was allowed.

“The last action that we took on truck prohibitions on that area, council elected at that time not to put a prohibition from the bypass into downtown,” Lewis said. “But certainly, that can be revisited at any time.”