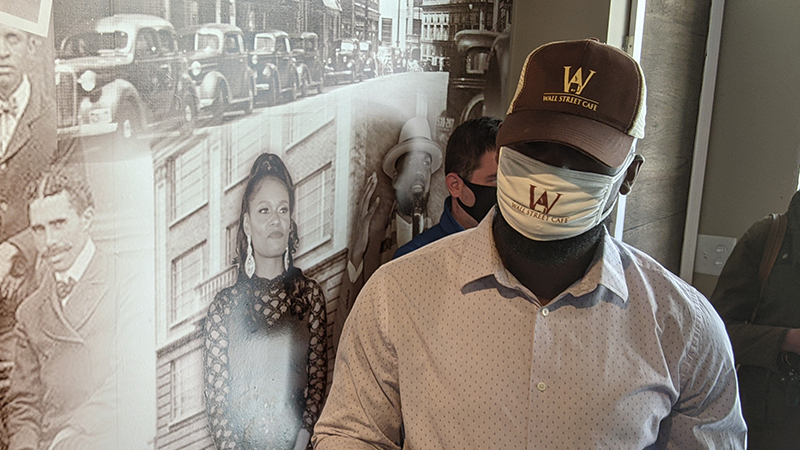 Domenick Epps, co-owner of Wall St. Café, led the first meeting of the Downtown Business Association in about a decade. It hopes to help business owners with common issues and attract new businesses downtown.

The July 28 meeting at the Pinner House is part of an effort for the group to reestablish a foothold in the fabric of the central part of the city and aid in handling common issues.

Chandler told the business owners and operators that while criminal activity, for the most part, “is not extremely high, and not high at all in the downtown business corridor,” the police department has all hands on deck, and he pointed to Precinct 1 Police Captain Mike Wise, who has worked with the police chief in the department since 1999, as someone they can turn to. Precinct 1 serves the core downtown area.

He outlined the department’s use of new Flock cameras for license plate detection, 17 of which have been put into place, with another 11 set to be installed in different parts of the city over the next two weeks.

“We’ve had a lot of success with this already,” Chandler said.

Chandler said the technology can be linked to other localities using the technology to help in investigating crimes. He told the association the department is coupling the Flock cameras with gunshot detection technology, which he said can distinguish between gunshots, firecrackers or backfiring cars.

He said in Virginia Beach, whose police department uses the technology, in 75% of the cases when it goes off, its department is not receiving a call from residents reporting shots being fired.

The police chief also stressed to businesses that the department needs someone who understands how their surveillance cameras work so police can access what they need in the event it is investigating an incident.

Pinner House co-owner Allyn Brown asked about the use of panic buttons and how the police respond to them. Chandler said when someone hits the button, “the calvary is coming.”

That said, Chandler stressed that panic buttons “are not for people that are stealing a candy bar.”

Chandler said they come through an alarm company differently, but in most cases, police will treat it as its highest priority call, but sometimes it will downgrade the call one level if an officer determines that there is no immediate threat.

Wall St. Café co-owner Domenick Epps, who led the meeting, asked what business owners could do about panhandling and the homeless in downtown. Chandler said that while the department has to preserve everyone’s rights, it is sensitive to how it affects businesses.

Chandler said that in most instances, officers know who the people are out on the streets and their issues, noting that not all are actually homeless. He told business owners and their employees: “Don’t feed stray cats.” He said once a panhandler or someone who asks for something gets it from a business, they continue to come back.

He said business owners can choose to say, “I don’t want you here.” Once told, and as long as they are not discriminating against the person based on race, religion or in another fashion, they are within their rights to ask them to leave. Once that happens, if the person comes back, they can be charged with trespassing. But if there’s no law being broken, police can’t tell them to move.

“What we as a police department have to do is, we have to preserve the rights of all,” Chandler said. “We cannot violate rights, period. … We can’t just make them move on. That would be the easiest thing to say, ‘Hey, you all get on out of here. Go somewhere else.’”

Epps said it is a matter of consistency in how they respond to panhandlers, that they must all respond the same way, but he also stressed that “the energy you give out is the energy you get back.” He said matters can be handled civilly.

Chandler said some have mental health issues, which poses a challenge for a department that has gone from handling three to four per week, to three to four per shift. Oftentimes each case means an officer has to stay with a person up to 72 hours to find them a bed in a facility.

Those at the meeting said they hope the association can be a conduit to make it smoother for them, and prospective business owners, to operate downtown.

Deanna Holt, business development manager for the office of economic development, said it has been her goal to reestablish the association after about a decade’s absence and hopes the meeting will be the catalyst toward building a thriving downtown.

The next association meeting will be Aug. 11, also at the Pinner House.