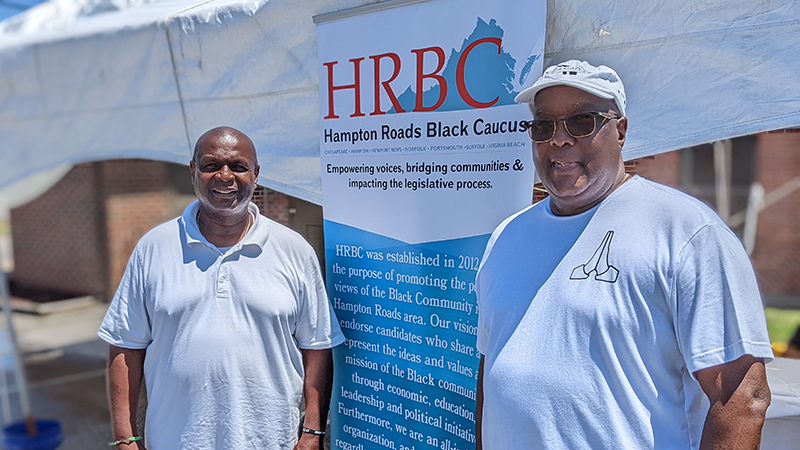 Ron Taylor, left, president of the Hampton Roads Black Caucus and Jay Hanna, executive director of Zoe Life Ministry of Chesapeake, outside the caucus’ gun buyback event Saturday at Balm Church’s East Campus on East Washington Street in Suffolk. Taylor said it plans to work in city neighborhoods and that its event was just one part of its plan to help curb gun violence.

Though few took advantage of the Hampton Roads Black Caucus’ gun buyback program Saturday at Balm Church’s East Campus on East Washington Street, those hosting it say they’ll be in the city for the long haul, working to curb the uptick in violence.

Just one person brought in a gun to be exchanged for a gift card in the event’s first 90 minutes. No final tally of guns collected over the course of the three-hour event has been released.

“This is one of the things to assist (Suffolk Police Chief Al Chandler) and a way to help him reduce the gun violence in this city, give the citizen a sense that someone is doing something,” said caucus president Ron Taylor, whose organization has held other gun buyback events across Hampton Roads. Taylor said the goal is not to take away anyone’s right to own a gun, but rather “(get) some of the illegal and unused guns off the street.”

Chandler and Duman said in June that a voluntary gun buyback program, on the one hand, would do little to curb gun violence in the city. However, Chandler said the program would be worth it if it takes one gun off the street that could have been used in a crime, a point Johnson stressed.

“If we can reduce one death, if we can save one life, that’s one life that we saved,” Johnson said. “If we can get one gun off the street, or prevent one gun from being improperly used or stolen, that’s one less gun that the law enforcement has to deal with.”

Zoe Life Ministries in Chesapeake has partnered with the caucus to help take back communities from gun violence. Its executive director and program director Jay Hanna, who was on hand during the buyback event, said being in law enforcement for more than 40 years has provided him with a valuable perspective on the impact on a community when the perception, or reality of gun violence.

“Our effort is by going in the neighborhoods, and letting people know that we are there,” Hanna said. “We’re not there for the short-term. We’re there for the long haul. As opposed to putting a Band-Aid on the wound, we’re going to treat it just like you would in battle, then we’re going to dress it and we’re going to stay there and stick with it long enough so that the wound is completely healed before we leave and then leave someone behind that can continue to treat and prevent even after we’re gone.”

Hanna said his organization is working with the city’s police department to target specific neighborhoods in its efforts. He said people in the neighborhoods want to see action, but they can’t see it if they are not there.

“When things cool down a little bit, you’ll see more boots on the ground,” Hanna said.

Joel “PT” Jones, a firearms instructor with the Strong Arms Gun Club, was also on hand to provide instruction for anyone seeking it.

Johnson said one event, no matter how many guns are collected, cannot end gun violence in the city. It’s going to take a concerted effort by everyone in the community — law enforcement, groups and residents to make it safer and reduce crime and reduce, if not eliminate, people getting injured or killed by being shot.

“We may not be able to eliminate it,” Johnson said, “but we can give the sense that at least someone is doing something that’s concerned about the same thing they’re concerned about.”