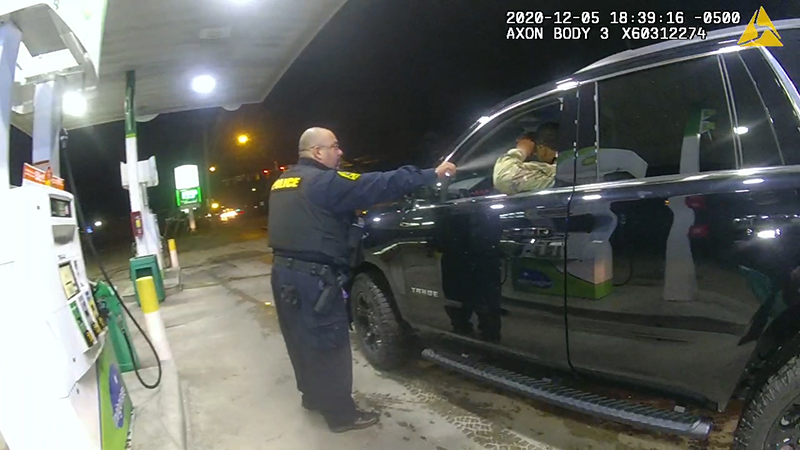 Windsor Police Officer Daniel Crocker and ex-officer Joe Gutierrez won’t face state criminal charges for forcing an Army lieutenant out of his car and onto the ground during a Dec. 5, 2020, traffic stop.

Hampton Commonwealth’s Attorney Anton Bell, whom Isle of Wight County’s Circuit Court named as special prosecutor after Isle of Wight Commonwealth’s Attorney Georgette Phillips recused herself, wrote in a July 29 letter to Phillips that, in his opinion, “no violation of state law occurred on the date in question.” The Smithfield Times obtained a copy of the letter on Aug. 1.

Bell, however, has asked the U.S. Attorney’s Office for the Eastern District of Virginia to open an investigation into whether Gutierrez’s actions violated Nazario’s civil rights, specifically federal statute Title 18, Section 242, which makes it a crime for any person acting “under color of law” to “willfully deprive” someone of “rights, privileges, or immunities secured or protected by the Constitution and laws of the U.S.”

The law further prohibits federal, state and local officials from willfully subjecting “any person to different punishments, pains, or penalties, than those prescribed for punishment of citizens on account of such person being an alien or by reason of his/her color or race.” Convictions under the federal law can result in sentences ranging from a fine to imprisonment up to 10 years in cases where the violation entails “threatened use of a dangerous weapon.”

“Gutierrez’s statements throughout the entire ordeal” would “lead a reasonable person to wonder whether underlying bias was at the root of how and why Nazario was treated in like manner,” Bell wrote.

Crocker and Gutierrez had pulled Nazario over for allegedly lacking a rear license plate. Nazario had a temporary New York plate displayed in his vehicle’s rear window, but the officers said they didn’t see it and accused the lieutenant of eluding police for having driven roughly a mile down Route 460 to a BP gas station before stopping.

Body camera footage of the incident records Gutierrez at one point telling Nazario he “should be” afraid, and that he was “fixin’ to ride the lightning,” a phrase Nazario’s lawsuit contends is a colloquial reference to an execution. Gutierrez then pepper-sprays Nazario and forces him out of his vehicle, using a series of “knee strikes to try to gain compliance,” according to Crocker’s incident report.

Windsor Police Chief Rodney “Dan” Riddle terminated Gutierrez in April 2021 following the release of the footage but allowed Crocker to remain on the force.

Bell’s decision comes more than a year after having received the VSP’s completed investigative report, during which time Bell completed an “exhaustive review” of Virginia state law, he told Phillips.

“The traffic stop alone was not a violation of law,” Bell wrote, adding that while he personally found the video to be “very disturbing and frankly unsettling,” Gutierrez’s use of force “did not violate state law as he had given multiple commands for Nazario to exit the vehicle.”

Isle of Wight County’s NAACP chapter, which had pushed for Phillips’ recusal and the naming of a special prosecutor last year, issued the following statement upon learning of Bell’s decision not to prosecute:

“While we respect the opinion of the Commonwealth Attorney, we had hoped for a different outcome on the criminal investigation. But we support and advocate for a civil rights investigation being conducted. In the coming weeks we will communicate with the US Attorney’s Office for the Eastern District of Virginia to advocate for an investigation of patterns and practices of the Windsor Police Department.”

The town of Windsor and its Police Department did not immediately respond to the Times’ request for comments on Bell’s decision.

Former Virginia Attorney General Mark Herring conducted his own pattern-and-practice investigation of the town last year following the release of the viral video footage, culminating in his December filing of Virginia’s first-of-its-kind systemic racism lawsuit against Windsor. His complaint alleges Windsor’s Police Department repeatedly “operated in a way that led to discrimination against African Americans,” the Nazario incident being the most recent example.

According to Herring’s lawsuit, Black drivers accounted for 42% of the WPD’s traffic stops from July 1, 2020, through Sept. 30, 2021 – though Blacks account for 21% of the town’s population and 22% of Isle of Wight County’s. Windsor has disputed the former attorney general’s claims, arguing in its January response that Herring didn’t account for the number of out-of-area motorists stopped on Route 460, a heavily traveled four-lane highway that passes through town.

The case saw shakeup when Herring, a Democrat, left office in January and his Republican successor, Jason Miyares, took over. When that happened, all three lawyers Herring had tasked with prosecuting the case subsequently left their employment with the Attorney General’s Office.

The case was initially reassigned to Assistant Attorney General Brittany Sadler Berky, who joined Miyares’ administration in January after working in business litigation with the nationwide Troutman Pepper law firm. Now, according to court records, it’s been handed off to attorney Christine Johnson, and is scheduled for an Oct. 6 hearing at 9:30 a.m. in Suffolk’s courthouse.