In the shadow of Suffolk’s Amazon facility, another opens two miles away in Chesapeake 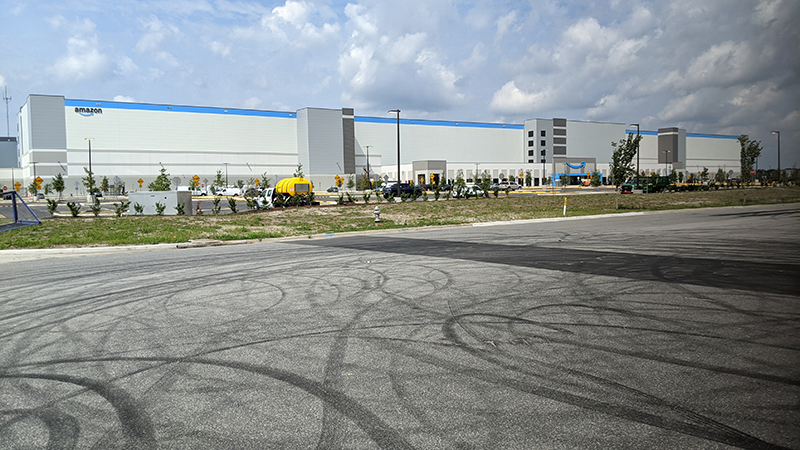 They were both announced at the same time by then-Gov. Ralph Northam on the eve of the COVID-19 pandemic more than two years ago — an Amazon robotics fulfillment center in Suffolk’s Northgate Commerce Park and another, smaller cross-dock fulfillment center about two miles away, but in Chesapeake.

But it is the Chesapeake fulfillment center, in the shadow of Suffolk’s, that opened first, with Amazon announcing Thursday that the 640,000-square-foot processing center launched last week.

Suffolk’s facility, meanwhile, which has appeared on the verge of opening for several months, is expected to do so sometime in September, two-and-a-half years after officials made the announcement, according to company spokeswoman Emily Hawkins, though she did not provide an exact date. Chesapeake’s facility, according to the company in its announcement, will create 1,000 full- and part-time jobs.

“As Chairman of the Appropriations Committee, my job is to get the most out of every dollar of revenue to help our district,” said Republican Del. Barry Knight, who represents parts of Chesapeake and Virginia Beach in the 81st District, in a statement. “Having a world-class distribution facility and its 1,000 employees locate in our area goes a long way towards meeting the budgetary needs of our communities. South Hampton Roads is glad to see Amazon’s continued investment in the South Hampton Roads region for businesses, their employees and their families.”

The 3.8 million-square-foot, $230 million robotics fulfillment center in Northgate Commerce Park is expected to employ about 1,000 people full-time. The ground footprint is 822,833 square feet and the building stands at 95 feet, which is four-and-a-half stories tall. It’s tall enough that Suffolk Fire Chief Mike Barakey noted at Wednesday’s City Council meeting that the city needed to order a new ladder truck to reach the top of the building if necessary, and it expects to receive it in November.

Its Amazon facility will be the largest industrial building in Virginia and the second-largest building in the state next to the Pentagon.

“Amazon has quickly become one of Hampton Roads’ largest and most engaged employers,” said President and Chief Executive Officer of Hampton Roads Alliance Doug Smith. “The opening of this facility in Chesapeake represents yet another milestone in their tremendous growth in the region, aided by the impressive collaboration between our partners in the City of Chesapeake, Virginia Economic Development Partnership, and the Port of Virginia. We are confident that this is only the beginning of Amazon’s relationship with the Hampton Roads community.”

Suffolk’s fulfillment center will work alongside robotics and other technologies to pick, pack and ship smaller-sized customer orders to people in Hampton Roads.

As a precursor to the opening of Suffolk’s Amazon robotics fulfillment center, the company in late January opened a 60,000-square-foot delivery station, called AMXL Delivery Station, in another part of Northgate Commerce Park, at 103 Industrial Drive. That site handles large-size items such as televisions, couches and kayaks for last-mile deliveries within an hour’s radius of the facility. It employs about 60 people in full- and part-time jobs.

Chesapeake’s inbound cross-dock fulfillment is the first of its kind in Virginia. Its facility will receive and consolidate goods from vendors and then send them to surrounding Amazon fulfillment centers.

“Amazon is excited to continue its growth and investment in Virginia with a new, state-of-the-art operations facility in Chesapeake,” said Melissa Nick, Amazon’s vice president of global customer fulfillment. “The commonwealth and its incredible workforce have been vital to our ability to serve our incredible customers and provide great selection and super-fast Prime shipping speeds across the region.”

Across the state, Amazon has more than 30,000 full- and part-time employees and opened its first Virginia fulfillment center in Sterling in 2006, and has more than 20 operations facilities across the state. According to Amazon, it has invested more than $34 billion in the state through its local fulfillment center and cloud infrastructure, research facilities and compensation to thousands of employees, with its investments contributing another $27 billion to the state’s economy. Its average starting wage for hourly employees is more than $18 per hour in the U.S.

The company, using methodology developed by the U.S. Bureau of Economic Analysis, estimates its investments have created an additional 96,000 indirect jobs.

“So many of my constituents depend on timely delivery of goods from Amazon, so I am very happy that Amazon’s footprint is expanding here in Hampton Roads,” said Republican state Sen. John Cosgrove, who represents parts of Chesapeake, Suffolk, Franklin, Portsmouth, Isle of Wight County and Southampton County in the 14th District.

When the two fulfillment centers were announced in 2020, Ardine Williams, Amazon vice president of workforce development, cited the access of the two sites to the Port of Virginia, along with a good infrastructure and strong workforce, good education system and collaboration among localities, as reasons to locate the facilities in the two cities, within two miles of one another.