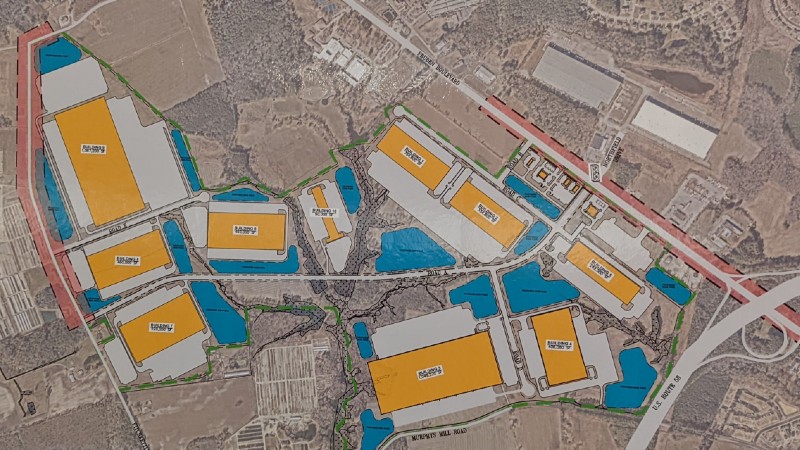 The Port 460 Logistics Center is proposed to be 545 acres and host close to 5 million square feet of warehouse space in what has been designated as a foreign trade zone service area.

If members of City Council and the developers of the Port 460 Logistics Center didn’t know how people who live in the area surrounding the proposed project feel, they certainly do now.

Opponents have been inundating council members and project officials with emails and phone calls, and dozens availed themselves of the opportunity to speak directly to them at the Aug. 3 council meeting and the public meeting the following day with the developers at the Hilton Garden Inn-Suffolk Riverfront.

If a rezoning of 540 acres along U.S. Routes 460 and 58, Pitchkettle Road, Kings Fork Road and Murphys Mill Road from general commercial and agricultural to heavy industrial zoning is approved, the project would encompass 4.7 million square feet for an industrial park of 10 warehouse buildings and some retail fronting U.S. Route 460. All of the property, except for about 30 acres that front Pruden Boulevard, would need to be rezoned.

The project would bring 5,400 direct jobs and 4,450 indirect jobs, according to officials from Matan Companies, the project developers, with an average yearly salary of $40,000 based on the average industrial warehouse income of a worker, with 10% of those jobs being upper management. It also forecasts $16.2 million in yearly income tax revenue and $28.6 million to $34.1 million in property tax revenue to the city’s economy.

It also touts planned investments in road infrastructure to bring them up to capacity and stormwater mitigation, with 18 ponds proposed to prevent runoff and pollution.

While there are multiple reasons people are opposed, the biggest one centers around the expected traffic to be generated as a result of the project, particularly an increase in the truck traffic and what they view as the likely possibility of them spilling into roads such as Pitchkettle, Kings Fork and Murphys Mill that cannot handle them.

In Kimley-Horn’s traffic impact analysis it did for Matan Companies, it noted that the city’s traffic engineering department “has expressed significant concerns over the use of Pitchkettle Road particularly by trucks to access the proposed development.”

In outlining existing road conditions, the analysis stated that the development would generate 20,948 daily weekday trips.

Close to 100 people spent about two hours giving an earful of those reasons to officials from Matan Companies, the project developers.

In outlining their proposal, project officials sought to explain how the project would benefit the city while explaining how to plan to address traffic and stormwater concerns.

However, besides traffic and environmental concerns, people also questioned the need for more warehouses in the city.

Mike Host, who attended the meeting, said the city has already met the state and regional need for more warehousing and distribution centers. He said adding the Port 460 project would make the city overbuilt for this type of industry.