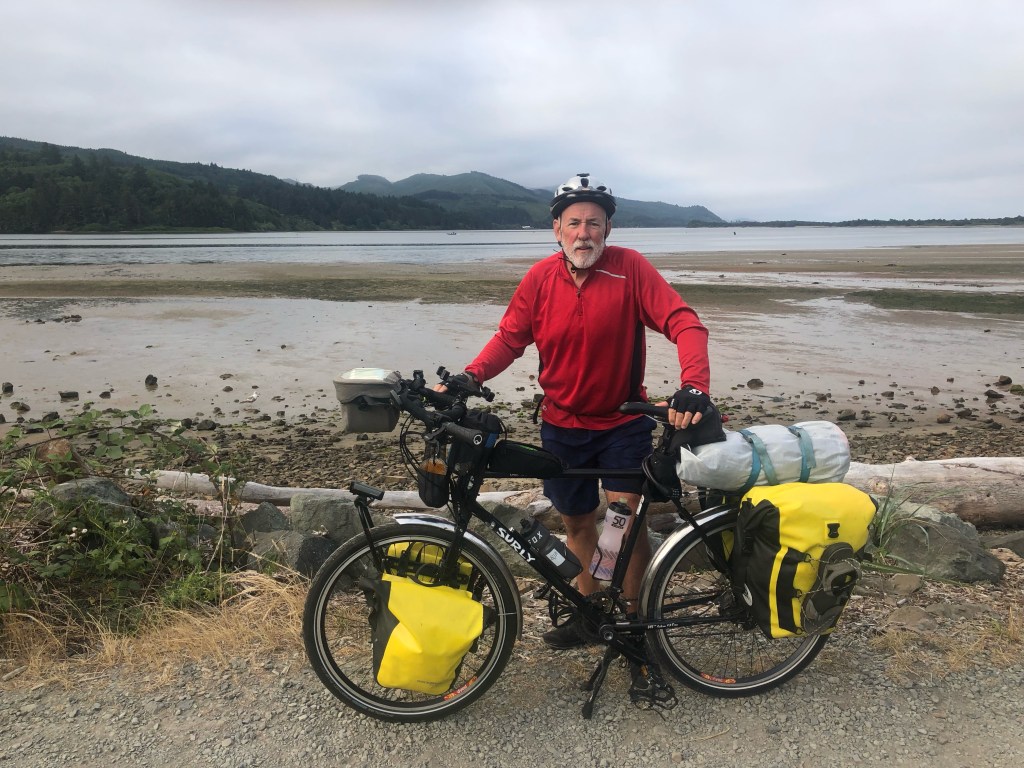 Joel Howard is celebrating after a huge cross-country accomplishment.

On Aug. 2, Howard completed the TransAmerica bike route from Virginia to Oregon that he started on April 28.

In an Aug. 4 interview, Howard spoke about the adventure, the hardships, and the advice to those who dream of taking the challenge.

Originally born in Texas, he lived his first 12 years there before moving to Florida. Howard then moved to Virginia Beach during his high school years and has lived in the area ever since. He served as a police officer for the Norfolk Police Department for 28 years from 1977 through 2005. After retiring as captain, he joined the Suffolk Police Department as a civilian police officer in 2006 where he was an analyst and planner for 15 years until his retirement in 2021.

Howard spoke on how after retirement, he wanted to accomplish something special as a bicyclist.

“I’ve had an interest in bikes when I lived in Virginia Beach and I bought a bike there and I enjoyed riding it, but I also enjoyed running,” Howard said. “About12 years ago, I had hip replacement surgery and that kind of took my running out of the equation. So I strictly had to kind of do biking… and I enjoyed it.”

Howard said riding was a hobby, it was not necessarily a passion. “But I had this thought in my mind that when I retired, I would like to do something significant with a bike, like riding cross-country. And, lo and behold in 2021, I retired and it was kind of like ‘It’s time to do this thing before I get too old.’”

Howard explained how he wanted to take the challenge due to the bike route’s history.

“It was started in 1976 when there was a group of people who rode from Astoria, Oregon to Yorktown, Virginia. It was to commemorate the bicentennial… it’s actually called the ‘76 Route,” he said. “So it’s called the TransAmerica Bicycle Trail and it is the … the grandfather of all bicycle trails that go cross-country.”

He said there are many different routes out there that people can select, but this one was kind of the original.

“I kind of wanted to do the classic one, the one that kind of started it all,” Howard said.

He had many interesting experiences on the road, including that he and his wife met up with other riders along the way.

“Once getting out on the road, I had a friend start with me who took me halfway through Virginia for about the first eight or nine days, and then I was on my own,” he said. “But I would meet up with people and we would ride together… a lot of times you just start out from the same (place) and (go) into the same place. You don’t necessarily ride one in front of the other. So you kind of go at your own pace and you end up at the same location and I did that with some of them through Virginia, Kentucky, and Missouri… and even Kansas.”

Howard said he met up with his wife in Colorado and they spent five days there. “Everybody that I was riding with went on past, but I met up with another group of guys, so we finished it up from Colorado on in,” he said.

Likewise, he described the hardships that came with the challenge of cross-country bike riding.

“One of the things that I really wasn’t prepared for was the hills and the elevations. Living in Hampton Roads, there’s not too many hills around here,” he said. “And you get into Virginia, there are some very, very steep hills and in Kentucky likewise.”

Then there were the western states like Colorado, Hoard said, noting there are very high hills but not very steep, saying they’re very gradual.

“So two different types of riding, but both are extremely taxing,” he said. “It was tough to do.”

Among the difficulties, such as the lands in Kansas, the road conditions, and hot spells, were the unexpected challenges that the dogs of Kentucky brought to him.

“…Their dogs will attack you, chase you, whatever you want to call it, they’re coming at you barking and snarling,” he said. “You don’t always know what their intentions are, but it doesn’t appear that they want to be friendly.”

Howard did get bit by a dog in Kentucky.

“It broke the skin, but it wasn’t anything major,” he said. “And then in Missouri, I had my sandals strapped to my bags on the back and one of the dogs pulled one of my sandals off. I had a citizen stop and pick it up and return it to me.”

However, he said there were the good aspects that kept him going, such as the people who supported him throughout his journey.

“The people are fantastic, they want to hear your story, they want to hear how you’re doing it… and they’re very giving,” Howard said. “They’ll stop and give you water. They’ll give you a ride if you need a ride. They’ll do anything they can to help you and that really kind of restores your faith in a lot of people… or all people I guess I’d say.”

Likewise, he also got to enjoy the nature and landscapes he came across during his journey.

“It’s just amazing,” Howard said. “There’s sometimes when you climb up a long pass and you’re tired and you come over that inland, you just see this… just this beautiful valley, that you think back in the days of when Lewis and Clark came across there and would look into that valley.”

While he said he doesn’t think it looks the same as it did for that duo, he said it was just a beautiful sight to see “and really kind of makes you appreciate how beautiful this country is.”

Howard offers advice to those who dream or wish to complete a cross-country bike ride challenge in their life.

Howard said physically those wanting to make the trek need to prepare for the pain or the effort that goes into it.

“It’s very hard to do this day after day, to get on to a bicycle and ride for five or six hours,” he said. “The longest ride I had was 98 miles and I know we had some rides that were eight hours long.”

Lastly, he further spoke on where he was able to study and also how Virginia law requires vehicles to completely change a lane before passing a cyclist.

“There’s an organization called the Chuckatuck Chainring that I became briefly involved in,” Howard said. “It really helped me prepare. If people are serious about cycling, there are bicycle organizations out here they can ride with.