Lake Prince Woods to expand, to use up to $15 million bond money to pay for it 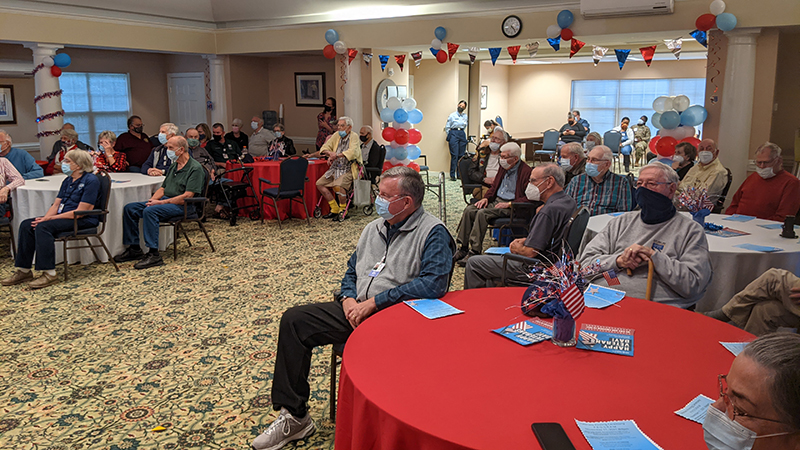 Lake Prince Woods held a Veteran’s Day ceremony last November for residents in one of its common areas. It has plans to renovate the facility, make infrastructure improvements and build a new wellness center through up to $15 million in revenue bonds approved Wednesday by the Economic Development Authority board.

It plans renovations to the facility, along with infrastructure improvements, a new 17,780-square-foot wellness center and a new covered area for vehicles.

It will pay for it through up to $15 million in revenue bonds, which the Economic Development Authority’s board approved Wednesday.

“They’re doing some capital improvements at the campus,” said Deputy City Manager Kevin Hughes, “and because they are a non-profit, they can work with the locality.”

Lake Prince Woods, which opened in 2002, is located on about 172 acres at 100 Anna Goode Way and is owned by EveryAge and Lake Prince Center, a North Carolina non-profit corporation. The community has residential apartments, apartment homes and cottages, licensed care areas to provide assisted living, memory care and skilled nursing care, and multiple common areas.

Besides the wellness center, there are plans to renovate existing common areas, including dining areas, office space and multipurpose rooms. Lake Prince Center also plans on making infrastructure improvements, including waterline work and putting in a new fire pump.

“It’s like conduit financing,” Hughes said. “We’re not using any city funds or EDA funds. It allows them to certain tax exemptions because they are a non-profit entity to work with the municipalities to bid out financial opportunities.”

The bonds are expected to be sold through a direct purchase transaction purchased by Truist Bank.

“There’s a benefit to the localities because we’ll get some fees from it, very minor,” Hughes said. “But essentially, it’ll have some positive tax implications for Lake Prince to fund these improvements via bond conduit.”

City Council will need to adopt a resolution at its Aug. 17 meeting affirming the action taken by the EDA board.

“There’s no moral obligation or financial responsibility of the city,” Hughes said.

He said Lake Prince Woods did the same thing when it first built its facility, and the EDA has also facilitated bonds with Sentara, Children’s Hospital of the Kings Daughters and the YMCA.