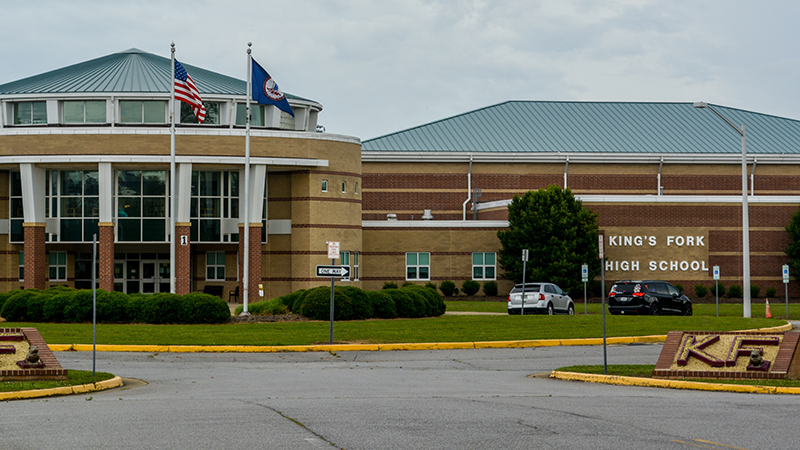 Suffolk Public Schools is closing in on having all of its classrooms covered in time for the start of the 2022-2023 school year.

Chief of Schools Dr. Stenette Byrd III told the School Board at its Thursday work session that it had closed the gap in vacancies, even since Aug. 5 when it updated information in advance of the board’s meeting.

At that time, the school division had 106 teaching vacancies — 47 at elementary schools, 17 at middle schools and 42 at high schools.

As of Aug. 10, the school division had 85 teaching vacancies, with more than double the long-term substitute teachers hired, going from 26 to 53. There is the equivalent of 15 unfilled classroom positions, Byrd said, down from 34.5 — nine elementary school teachers, two middle school teachers and four high school teachers.

Board member Heather Howell asked what happens in elementary classrooms when they are condensed, and whether there would be an instructional assistant in those circumstances. Byrd said there are caps to classroom size.

“Condensing two classes to create a class of 40 can’t happen,” Byrd said. “There are certain numbers targeted. So we still are going to stay under our caps when we have to condense a classroom. But that’s always just the first thing we want to look at. We would not condense to the point where it would be beyond the class size that a teacher would teach in in a normal situation.”

Byrd said long-term substitutes will be given additional support. They will be a part of the new teacher orientation and will be assigned mentors, two things that had not been done in the past, he said, and they also will begin receiving pay at that point.

“Our thought process is, the day we acquire the certified teacher, that mentor’s in place for that individual as well,” Byrd said.

Karen Jenkins asked Byrd whether the hiring process would continue even after the start of school.

In praising the division’s human resources staff for moving to close the vacancy gap, Byrd said hiring efforts would continue and they would support those who are just shy of earning their teaching certification or those in career-switcher programs.

“One of the things that we can do to tackle the teacher shortage is, of course, to continue to support our own,” Byrd said, “those long-term subs who need just a couple of classes to finish, those kinds of things. We think our best option right now, unless someone just happens to move in town, is to work with those who are already supporting our students.”

Superintendent Dr. John B. Gordon III said the division wanted to have Aug. 15 as a cutoff for new hires, for now, since new teachers would be starting a week later, and to provide the division’s instructional team time to process their paperwork, and to be able to hand out their $250 signing bonus on their first day.

“And then we’re going to continue to recruit year-long,” Gordon said. “We’ve gotten lucky with a couple of our military families that have actually moved into the area. We’ve found some diamonds in the rough that are going to take on some of our teaching vacancies, but we also are expecting our next major push to be in December for December (college) graduates.”

Byrd also noted that the division has increased pay and stipends for teachers — their pay increasing by 19% over the past few years, he said — and has provided compensation for extra duties while also putting in instructional and student supports while it continues to address a shortage of teachers.

To mitigate classroom vacancies once the school year starts Sept. 6, the division, at all levels, will first look to condense classrooms. Its second choice at the elementary and middle school levels is to use long-term substitutes, and at the high school level, it will be adding a sixth-block class to a teacher’s schedule.

Its third priority at the elementary level is to use a hybrid sync teacher and learning facilitator, and use the division’s virtual platform for middle and high school vacancies.

Beyond that, only at that point would elementary students shift to a virtual platform. Middle and high school students would use a hybrid sync teacher and learning facilitator, and last, at the high school level, would be using a long-term substitute.

“I think we’re doing well considering the shortages all over, everywhere, the nation, the area,” said board member Lorita Mayo. “Just keep doing what you’re doing, and hopefully we can continue to fill those positions.”

Board member Sherri Story said she was disappointed that the division will be adding sixth block classes for some high school teachers and was critical of using virtual learning and the hybrid sync model at the elementary level. She said the division needs to address low teacher morale as a reason for them leaving the profession or the division, saying a number who left went to teach for lower pay in Isle of Wight County. Story said the division also was “touting” the addition of a sixth block for teachers and increasing their pay. She also criticized whether qualified long-term substitutes would be teaching a subject they’re licensed to teach.

However, the division currently has not shifted any of its students not already enrolled through SPS Online into virtual learning, and it has yet to determine whether the hybrid sync model needs to be used at the elementary and middle school levels. Byrd, in his presentation to the board, did not use the mitigation strategies to tout them, but instead noted them as measures to address the shortage until the division can be fully staffed with teachers.

Chairwoman Dr. Judith Brooks-Buck refuted Story’s assertions. She said teachers leaving due to low morale are “not consistent with the facts.” She said many left due to retirement, and though she acknowledged losing some teachers to Isle of Wight, the division gained many others from surrounding local school divisions such as Chesapeake, Portsmouth, Norfolk and others.

Chief Academic Officer Dr. Okema Branch said there are currently 184 students enrolled in SPS Online in grades K through 12 — 66 at the elementary level, 70 at the middle school level and 57 at the high school level — for the upcoming school year, down from 220 about a week earlier when she and Byrd submitted the presentation.

The SPS Online program is, she said, primarily taught by Virtual Virginia instructors who are endorsed and certified to teach in their subject areas in Virginia. Branch said 90% to 95% of the course instruction will be live, rather than asynchronous, and it will be 100% live instruction for grades K through 5.