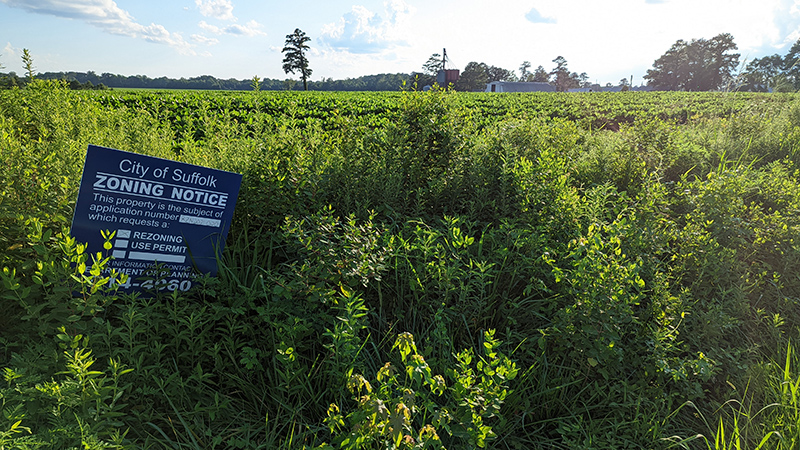 A project that would bring about 10 warehouses on 540 acres of property off of U.S. Route 460 and also bordering U.S. Route 58, Pitchkettle Road, Murphy’s Mill Road and Kings Fork Road is one step closer to reality after the Planning Commission, despite strong opposition to the project from an overflow crowd at City Hall, voted 5-3 to rezone the property from general commercial and agricultural to heavy manufacturing zoning.

If there’s one thing both proponents and opponents of the Port 460 Logistics Center project can agree on, it’s that traffic in the surrounding area will increase as a result.

But project developers Matan Companies, the applicant for a rezoning of a 545-acre site off of U.S. Routes 460 and 58, Pitchkettle Road, Kings Fork Road and Murphys Mill Road that would bring 10 warehouses and five commercial retail buildings, say the traffic will be at lower levels than what it could be with other types of development, and even if there is no development, it will continue to rise.

City Council is scheduled to hold a public hearing Wednesday on the project rezoning from general commercial and agricultural to heavy manufacturing zoning. Mayor Mike Duman, who expects to at least double the normal public hearing time for the rezoning requests at council’s meeting Wednesday, has called for a delay in the vote to rezone the property for at least 30 days, and noted that council “appears split on this one.” He said the project demands a lot of attention and research and is the biggest one he’s seen in his 12-plus years on council.

Duman said the timing of the project is not ideal given the ongoing work on Route 58 from the bypass to the area around the Virginia Port Logistics Park.

VDOT’s 2021 traffic data indicates that 14% of traffic on Route 460 from the Suffolk Bypass to the city line with Isle of Wight County is made up of trucks, while 82% are two and four-tire vehicles. Daily traffic volumes on Route 460 range from 24,000 vehicles closest to the bypass to 13,000 between the city line and Lake Prince Drive and Providence Road.

The city had asked the project developers to develop 2045 traffic projections in the Route 460 corridor to identify capacity needs, with Kimley-Horn performing average daily traffic counts from May 10-12 along the road and using VDOT statewide planning system data to develop an annual growth rate, identified as being 1.2%.

However, the report noted current city efforts to revise its comprehensive plan and possibly modify its central growth area boundary to the north, which “would allow for more development within the study area along Pruden Boulevard and increased future traffic volumes,” and because of that, it used a 2.5% growth rate for developing future 2045 traffic projections.

Based on the projections, it recommended widening U.S. 460 from a four to six-lane divided highway between Providence Road and the U.S. 58 Bypass, and making the rest of U.S. 460 to the city line a four-lane divided highway. That, it said, “will provide the necessary capacity for the anticipated future traffic demand.”

The analysis also recommended a truck route designation and signage program to deter truck traffic from using Pitchkettle Road when going from Route 58, the project site and Route 460.

Proposed traffic improvements in the first phase of the project include building parts of two roads in the site, designated as Road A and Road B, with connections to U.S. 460, making improvements to the U.S. 460/U.S. 58 ramp, U.S. 460 commercial site access improvements and U.S. 460 and Road B intersection improvements.

Matan Companies has also committed to proffering $4.5 million to the city to be applied toward preliminary engineering plans for road improvements from the U.S. 58 eastbound off-ramp at U.S. 460 to the intersection of Lake Prince Drive and Providence Road, to be paid before the first certificate of occupancy/use within the heavy manufacturing zoning area.

In recommending approval of the rezoning, the city’s planning staff said “the size of the site and the location of the project will provide sufficient opportunities to buffer the proposed warehouse use from adjacent residential uses while providing access to major transportation routes.

“The proposed project will enhance economic vitality for the city and region and advance the city’s goals to achieve an appropriate jobs-to-housing ratio by creating employment opportunities during construction and for the ongoing operation of the proposed facilities.”

Plans to make improvements along Route 460 have stalled previously, as VDOT studied them going back to 2003.

In late 2012, VDOT had reached a deal with U.S. 460 Mobility Partners and the Route 460 Funding Corporation of Virginia to finance, design and build the project. It would have precipitated the new construction of about 55 miles of four-lane tolled highway from the Route 58 Bypass just south of the existing Route 460 in Suffolk to Petersburg, with the tolls to have been used to pay for the project. It would have cost about $1.4 billion.

However, after the project had been approved by the Commonwealth Transportation Board and was closing in on right-of-way acquisition, the project was canceled due primarily to environmental concerns raised by the U.S. Army Corps of Engineers. That, and four other alternatives, were later reviewed, and a 17-mile stretch of Route 460 from Suffolk to Zuni that would have cost about $450 million did not go through after scoring too low on VDOT’s SmartScale program, which evaluates projects based on how well they improve safety and reduce congestion, provide for added accessibility, add to economic development, promote efficient land use and its environmental impact.

In 2018, a VDOT study outlined three possible alternatives for improvements along Route 460 in Suffolk from the city line to Northfield Drive — a 25,580-foot stretch — with costs of $25.6 million for the first alternative, $41.5 million for the second and $62.8 million for the third, with costs adjusted for inflation to construction year 2024, it stated. However, those figures did not factor in costs to acquire the needed right-of-way.

There were additional costs for improvements for an 8,040-foot portion of the road in Isle of Wight County from Lovers Lane to the city line, ranging from $6 million to $21.3 million.

“Based on the results of the corridor evaluation and the public comments received, it was clear that long-term substantial changes were needed to truly address safety and traffic flow along the corridor,” it stated.

The city had applied for funding for the second alternative, to widen the shoulders of the road to eight feet, and widen the road itself by five feet in both directions, adding a median barrier and narrow inner shoulder along the edge of the travel lanes and providing a 10-foot separation between each direction of travel.

In that study, it noted 115 crashes at intersections from 2012 through 2016, three of those fatal and 64 resulting in injuries.

In the Kimley-Horn analysis produced for the Port 460 project, it outlined several needed improvements along the Route 460 corridor:

There would also need to be interim improvements made along the Route 460 corridor that Matan Companies stated in the analysis that it would make.

These include building Road A on its property from Route 460 in phases as the project develops, installing a traffic signal at Routes 460 and 58 and updating the signal timing, modifying the westbound off-ramp to Route 58 and installing guide signs and pavement markings to direct traffic.

It has outlined numerous other improvements to be phased in with the project should council approve its rezoning request.

The public hearing on it will be Wednesday at City Hall during council’s 6 p.m. regular meeting.