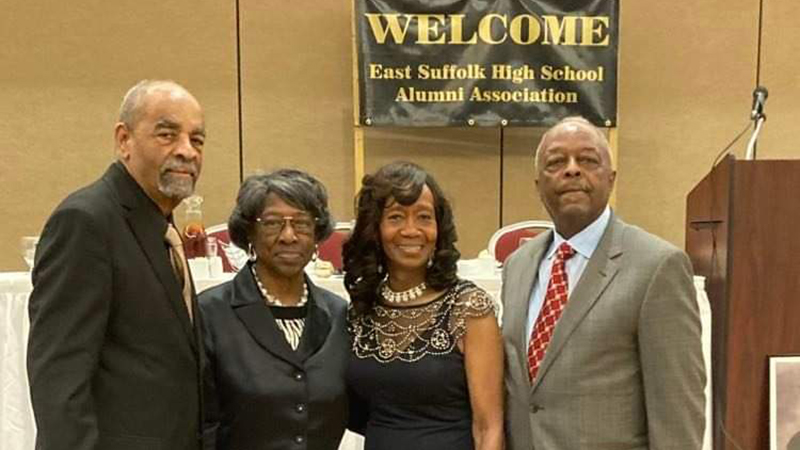 This celebration, Thursday, Aug. 11 to Sunday, Aug. 14, organized by the East Suffolk Alumni Association, brought the crowd together for the 20th semi-annual school reunion at the Hilton Garden Inn Riverfront Hotel and the East Suffolk Recreation Center.

Retired Col. Carol Boone Thompson, who resides in Satellite Beach, Florida, and a member of the Class of 1958, was delighted to return for the event.

“I’ve been coming to the school reunion for many years and wouldn’t miss it for anything,” Thompson said. “I spent 32 years in the Air Force and only missed reunions when I was overseas.”

The Alumni Association has always held the semi-annual reunion on even-numbered years. However, due to the pandemic, it canceled the event in 2020 and for this year’s reunion, the association decided to recognize the classes of 1960, 1961 and 1962 for their anniversaries.

The reunion banquet honored Dr. Thelma Taylor Norfleet, a former faculty member, who was the chief organizer of the Alumni Association in October 1999. She did this to keep the school’s legacy alive and the association became incorporated in November 2000.

“The last graduating Class of ’65 is now in their middle 70s,” W. Ross Boone, a past president, stated. “We need to hold this event as long as possible and look at other options to encourage more local people to participate in future reunions.”

On Thursday, kickoff activities began with a meet and greet, games and refreshments, and a hospitality room at the hotel.

On Friday, a scholarship banquet included a tribute to Dr. Thelma Norfleet. During the banquet, Michelle Norfleet-Crenshaw, Norfleet’s daughter, delivered the keynote address in her mother’s honor by speaking about her contributions to the school and the association as its first president. In addition, a presentation of scholarships was presented by Mary Sebron Steverson, chairman of the Scholarship Committee. To date, the association has presented $40,000 in scholarships to deserving students from Suffolk high schools. The history of the association was given by Marion Wright. The banquet concluded with dancing                          with music by “Element,” a live band.

On Sunday, a worship and memorial service at the Hilton Garden Inn was led by the Rev. James Perkins. During the service, Janice Howell and Barbara Thompson lit memorial candles. Each candle represented a decade of classes, faculty and staff. The Rev. Glynn Whitaker, a 1965 graduate, gave the morning message, and Gregory Lawrence was the guest soloist for the worship service and banquet.

Gladys Beamon-Squires, 93, a member of the Class of ’46, flew from Brooklyn, New York to Virginia to attend the reunion. “As long as I am able and healthy enough, I will make an effort to attend this wonderful reunion whenever it is being held,” she said.