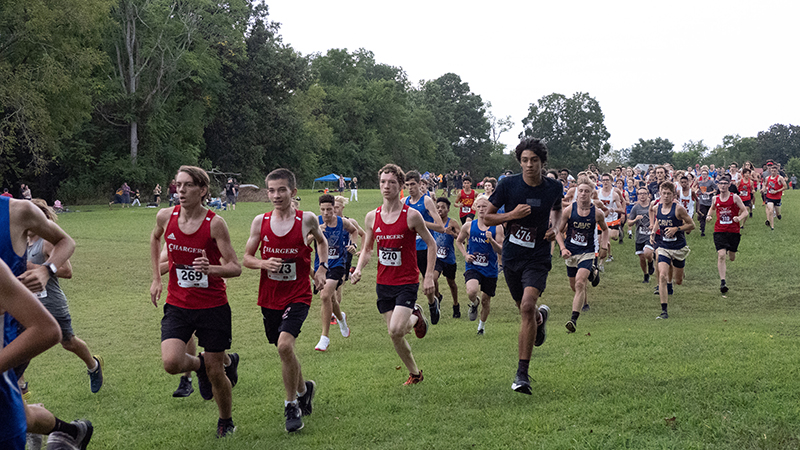 The two-mile course, cut down from its usual 3.1-mile route, saw the girls team finish first out of 11 schools, both public and private. The IWA boys team finished fifth out of 13 schools.

The girls netted 68 total points to claim the team title, 10 clear of Stonebridge and 15 in front of Smithfield, co-hosts of the meet. IWA senior Hannah Edwards came in second place with a time of 13:19.13.

The Charger boys team had 134 points. Tabb High School claimed the top spot with 27 points, including second-, third- and fourth-place runners. Senior Pierce Cutler finished in 15th place with a time of 12:07.

The IWA teams begin their regular seasons with an official meet Aug. 31 at Norfolk Academy.

Jason Chapman passed for 117 yards to lead his team in the regular-season opener for both squads.

The Chargers topped Arcadia High School of Oak Hall, 34-18, in an Aug. 19 scrimmage.

Both teams had at least a part of two possessions in a scoreless first quarter, but Shores tallied first when Emmanuel Williams ran for 12 yards to cap a seven-play, 64-yard drive.

Williams would finish as the game’s leading rusher with 170 yards on 23 attempts.

After the Chargers’ Tyler Craun gathered in the ensuing short Shores kickoff attempt and ran it back to the Seahawks’ 10-yard line, IWA seemed poised to return the favor. But two tackles for IWA losses, followed by a muffed snap, set up fourth-and-goal at the Shores 29. A subsequent pass attempt fell incomplete, turning possession over to the home team.

Eight plays later, Shores had a touchdown pass nullified by a holding penalty and the teams went into halftime with Shores up only 6-0.

The Seahawks second series of the third quarter paid off with another Williams touchdown run, this time from a yard out. The 2-point conversion made the score 14-0 with 2:34 left in the period.

Williams would later haul in a 30-yard pass for another touchdown. The resulting PAT capped scoring in the game.

IWA’s second-deepest incursion into Shores territory came in the fourth period. Aided by long pass plays from Chapman to Alex Holt and Jackson Cofer, the team had a first down at the Shores 21 late in the game. After a 5-yard loss and another pass play to Cofer got the offense back to the 21, but an incomplete pass and a no-gain rushing attempt turned possession back to the host team with just seconds left on the clock.

The IWA girls volleyball team begins its season with a match Sept. 15 at Broadwater Academy in Exmore.