SPSA board holds off on e-waste recycling, to get input from regional recycling committee 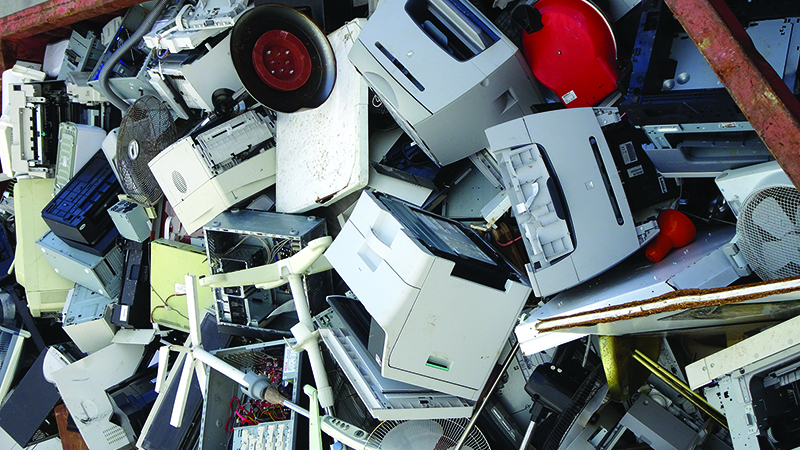 Representatives on the Southeastern Public Service Authority’s board, including Suffolk City Manager Al Moor, expressed support for a regional electronic waste recycling program, but they were not yet ready to fully commit to it.

“Suffolk would be interested in investigating and moving forward with this,” Moor said during the board’s Aug. 24 meeting.

During that meeting, the board received a second presentation about the program, which would be designed to keep e-waste out of its landfills. Examples of e-waste include computers and laptops, LCD screens, cable and satellite set-top boxes, stereos, cell phones, servers, gaming consoles, DVD players, VCRs and CD players.

Some Hampton Roads localities have implemented their own programs.

Suffolk holds occasional recycling drives that allow residents to recycle electronics and other items, while Norfolk collects e-waste and issues an invitation for bid for a third-party company to come collect it from the city when it has enough.

Virginia Beach’s landfill gives its residents the ability to drop off unwanted electronics for free. In Portsmouth and Chesapeake, they rely on Goodwill and special electronic recycling collection events at no cost to residents.

Norfolk SPSA representative Richard Broad said it has had bad luck with e-waste vendors, noting that one vendor had simply stacked the e-waste in a warehouse and when it got full, “they were going to turn the key and walk away.”

“It scares me to have everybody doing these individual contracts,” Bland said.

Isle of Wight County manager Randy Keaton said it had previously had a program that was discontinued due to COVID-19.
Michael Etheridge, the county’s solid waste manager, said it had eight drop-off locations for residents to part with any of their waste, with electronics being a part of that program. When COVID-19 hit, the county was using inmate labor to package material, “so we kind of lost our labor force, so we actually had to discontinue the program.

“Having a location (for e-waste) would be beneficial to Isle of Wight County,” Etheridge said. “We have the ability to at least bring material to a location. We’re trying to get out of processing. … Many other operations have the ability to process, but if we do have a location to take bulk material for it to be processed, that would be ideal for a situation like ours.”

The board had three options with the program. It could have dismissed it entirely, directed SPSA staff to put the program in place or waited a little longer to gather more information.

After initially weighing a motion to move forward with the program, the board decided instead to send the matter back to SPSA staff to take action, in coordination with the Hampton Roads Planning District Commission, which serves as the designated regional solid waste planning agency, and its Recycling Subcommittee. SPSA staff indicated that most of the legwork to put an e-waste recycling program together has been done, but it would work with the planning district commission’s recycling committee to get the proposed program on its agenda and determine whether it would be something they need to approve. The SPSA board expects to take action in September.

“Because we’re looking at e-waste as recycling, I don’t want that to be misinterpreted that SPSA is in the recycling business,” said Portsmouth SPSA representative Luke McCoy. “Our mission is trash. To me, this is eliminating product that is trash at the present time, and it’s to the region’s, as well as SPSA’s advantage, to address this product. … I think this is a step in the right direction with handling the worst things that go in our landfill.”