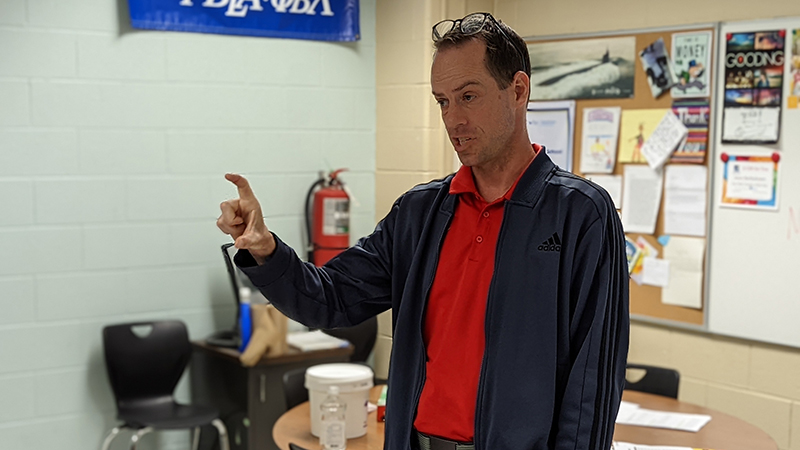 Jason Bartholomew, a business information and technology teacher at Nansemond River High School, was named the Region 2 teacher of the year Tuesday. Bartholomew is one of eight teachers in the running to be the 2023 Virginia Teacher of the Year.

Jason Bartholomew’s retirement after a 21-year career in the Navy has been a boon for Nansemond River High School and in particular, for the students who have taken one of his business or personal finance classes.

After being named Suffolk Public Schools’ 2022 citywide Teacher of the Year, Bartholomew was selected Tuesday as the Region 2 teacher of the year, and is one of eight in the running for the 2023 statewide honor.

Bartholomew learned of the honor during a ceremony at the school, with Superintendent of Public Instruction Jillian Balow and division Superintendent Dr. John B. Gordon III on hand.

“Our eight regional teachers of the year will serve as ambassadors for the schools in their regions, the state and for the teaching profession,” Balow said in a release. “They are recognized by their peers — and now by the commonwealth — as the best of the best for their ability to build strong relationships with students and families, and teach in ways that inspire students to excel, regardless of the subject matter or the challenges they face.”

Bartholomew said when he earned the division award that while it is an honor for him to be recognized, that’s not his objective.

“When I come in here, I honest to God make it about the classroom,” Bartholomew said in an interview with the Suffolk News-Herald earlier this year. “How can I be most effective in the classroom? I’m not chasing anything else. I’m not trying to become an administrator. I’m just not trying for all those things that are personal accolades.”

But his students said it was precisely because of his modesty and his background of being a career-switcher that gives him relevance and credibility, even as he keeps his classes lively and informative.

“He just teaches how he feels is best, and he comes off as very original and genuine,” said Antonio McCullough, who as a junior took Bartholomew’s accounting class.

A Virginia Department of Education committee — among them teachers, representatives of education and business associations, the military and 2022 Virginia Teacher of the Year Daphne Tamara Fulson — chose the eight region winners from among candidates nominated by school divisions. Region 2 is made up of 14 school divisions in the south Hampton Roads, Western Tidewater, the Peninsula and Virginia’s Eastern Shore regions.

The committee will reconvene in Richmond Sept. 30 to interview Bartholomew and the other region winners and pick the 2023 statewide teacher of the year. Gov. Glenn Youngkin and First Lady Suzanne Youngkin will announce the selection that evening during a ceremony at the executive mansion. The statewide winner will represent the state in the Council of Chief State School Officers National Teacher of the Year Program.

Bartholomew said previously he didn’t have the adjustment he’s seen others have when they switched careers and went into teaching, but he did have to adapt to his students.

“I’ve had to change a little bit,” Bartholomew said. “I’ve had to realize that these aren’t your 20-something sailors. These are 17-year-old kids who are still trying to figure things out, and they’re living a different life. So I’ve had to loosen up a little bit.”

The eight 2023 Virginia Regional Teachers of the Year